In Memory of One Hot Drama Mama: Remembering a Trail Legend 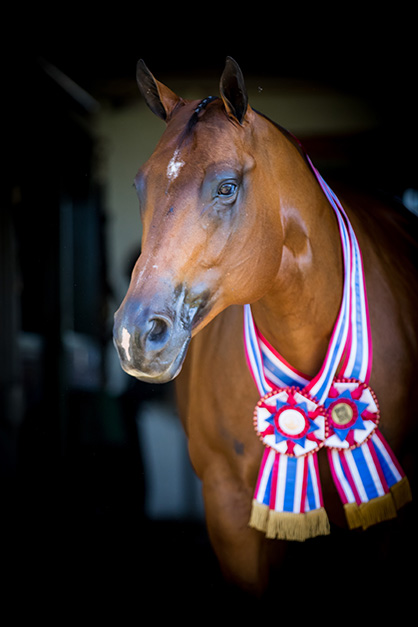 The Equine Chronicle and Sea Ridge Farms are saddened to share the passing of legendary mare, One Hot Drama Mama, on November 16, 2021. Fondly known as “Peaches,” the 2007 mare was owned and loved by Angela Wade. In their nine years together, Peaches and Angela were two-time AQHA World and Congress Champions in Amateur Trail. The talented mare was a champion producer as well, passing on her strong will, show presence, and aptitude for Trail to her babies.

The Voss family of Iowa proudly bred and raised Peaches, with Jill Voss showing Peaches through her five-year-old year. Peaches was out of Jill’s beloved show mare, Delitas Good Version, and by leading AQHA sire, One Hot Krymsun. Jill and Peaches saw success early on in the Western Pleasure pen, amassing over 600 points in just two years together. Trainer, Joni Specht, started Peaches in the Trail event and saw her aptitude for the class, winning Green and Junior Trail all while still succeeding in Western Pleasure. In 2012, Jill and Joni made the difficult decision to sell this promising mare to Angela and send her off to her new home at Sea Ridge Farms in Wellington, Florida.

Peaches and Angela made an incredible team, with a resume of wins in every major AQHA and NSBA competition. Beginning in 2014, the pair won Amateur Trail at the AQHA World Show; the title was both Angela’s and Peaches’ first World Show win. The duo returned to the winner’s circle at the AQHA World Show in 2016 when they won the same class again. Their success was not limited to the Jim Norick Arena in Oklahoma City, however. Peaches and Angela were 2018 NSBA World Champions in Amateur Trail along with winning Amateur Trail at the All American Quarter Horse Congress in 2017, and again in 2021, just last month. Their most recent win at the Congress turned out to be Peaches’ last performance in the show ring, and she proved that she still had what it takes to navigate a Trail course with her well-known style.

The ultimate testament to Peaches’ illustrious career is the promising future of her foals, who are already earning their spots in the winner’s circle just like their mother. Earlier this year, My Mama Said So, aka “Sally,” earned a NSBA World Championship title in Junior Trail. Later in 2021, Angela and Sally made their Horsemanship debut at the Congress in a deep Amateur Horsemanship class and ended up in the top five placings. To make things better, fellow barn mate and competitor, Gillian Chant, also earned a top five placing in the same class aboard Sally’s full brother, SleepinInTheStands, aka “Sam.” Both horses are out of Peaches and by RL Best of Sudden and came from the same embryo flush. Peaches has over ten babies on the ground and in the show arena, with offspring including Can I Get A Witness and Lopin All Night Long, both of which recently earned top ten placings at the 2021 AQHA World Show in Trail and Western Riding.

Peaches leaves behind a team of loving supporters, dedicated trainers, and loyal caretakers. This special mare’s legacy will continue to live on through the memories of all those who admired her tenacious spirit and undeniable presence. The Equine Chronicle extends its condolences to Angela Wade, Patty Vatterott, and all those who were a part of this mare’s storied life.

Click on the links below to view articles we’ve written about this incredible mare during her career.