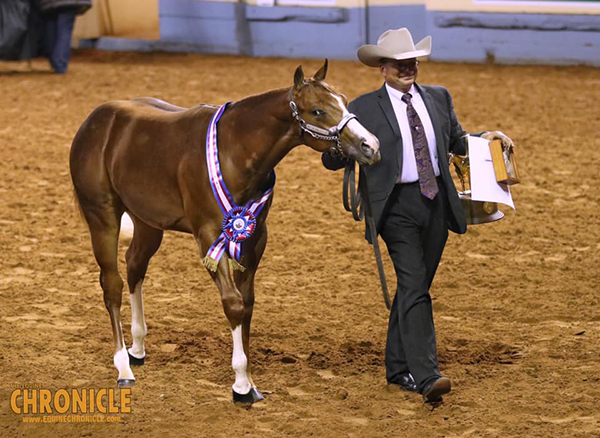 Tim Finkenbinder was at the lead of Classiest to win Weanling Fillies. We chatted with the owner of “Classy,” Amy Jo Erhardt, the other day when she was crowned the World Champion in Amateur Weanling Fillies. Click here to read more.

Reserve was Jason Smith with Sasseta. Third was Steve Ferguson with CF Sittin Pretty. Fourth was Tom Robertson with Shezz To Cool. Fifth was Luke Castle with Talk To My Agent. 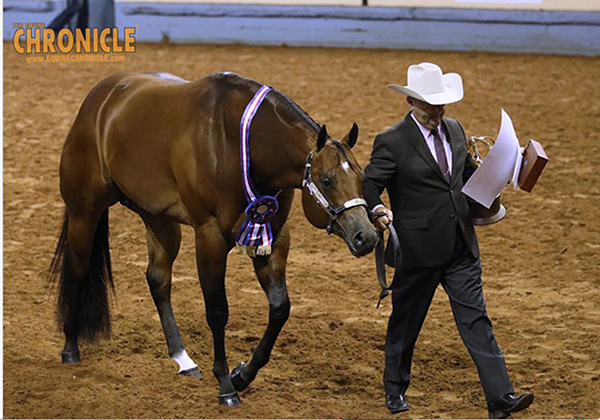 The winner of 2-Year-Old Stallions was Ross Roark with Evinceble. Reserve was Luke Castle with CR Peacemaker. Third was Jason Smith with DMM Double Oh Seven. Fourth was Tim Finkenbinder with I Got Cool Luck. Fifth was Andy Staton with Juz Sayin.

Now that Evinceble has been named the Open and Amateur Grand Champion at the Congress and crowned the Open and Amateur World Champion at the World Show, his owner, Scott Trahan, has let us know that this stallion will now be retired to begin his breeding career. Given the plan, we wondered if there was a bit of pressure coming into the World Show after such a successful Congress.

“Anytime you show a stallion, it’s so competitive, probably because of the financial aspect of it,” Scott says. “Then, the 2-year-old division is probably the most competitive class that everyone wants to win. So, I did feel a little pressure, but the whole time I knew that I had a great horse, and that always makes it easier. But it’s a horse show, and there are a lot of dynamics that go on. 90% of it is the horse, and then you’ve got 10% of stuff you can’t control.”

Evinceble has been with Tom Robertson since he was a baby, but now that his show career has come to a close, he will live at Milan Quarter Horses. Then, it’s off to Stallion Marketing Services with Kim Dean where he will begin his breeding career. “Last year, we test bred him, and he has 14 babies coming in 2020.” 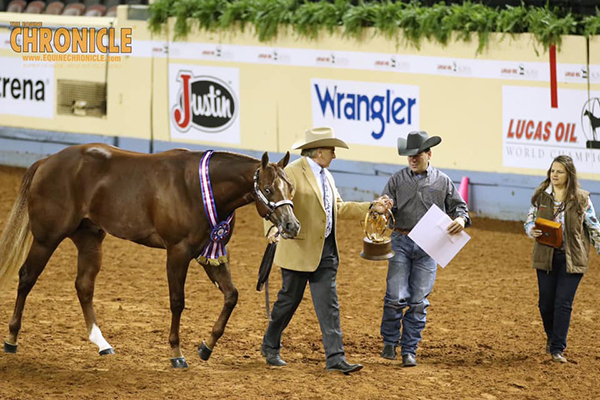 Tom Robertson was the winner of Yearling Colts with Irrefutable. Reserve was Tim Finkenbinder with My Bravado. Third was Jason Smith with GLS Uptown Secret. Fourth was Buddy Laney with FG Xxpectations.

The owner of Irrefutable, a colt by Ecredible and out of a My Intention mare, is Christopher Perniciaro, who nicknamed his horse “Gordie” after Gordie Howe, “the greatest hockey player of all time.” It’s a very interesting story as to how Christopher obtained Gordie, and he can thank his lovely wife for the smart acquisition.

“I was in the garage, and my phone was in the house. My wife kept hearing it beep, so she looked at it. Tom had texted, ‘So, you guys don’t like this colt I sent a picture of?’ I came back in the house and the next thing I know Laura had bought a horse. Surprise!”

“Tom Robertson has had him the whole time and has done an excellent job. We’re so happy. He’s so balanced, and his front end is so big and pretty. His neck comes out great, and he will be good for a long time. We’ve never stood a stud before, but we’re real high on that. Tom thinks he will be even a better producer than a show horse, so we’re hoping for good things in the future.” 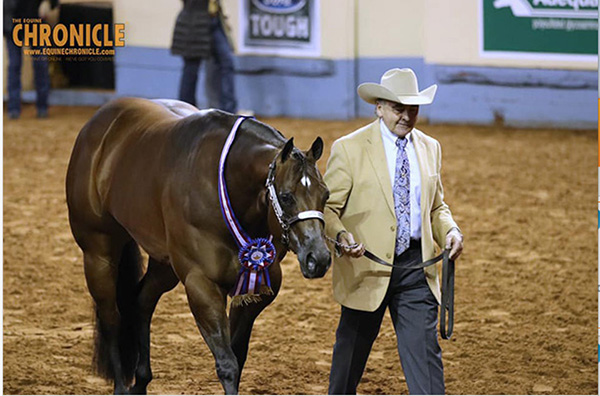 Finally, winning Aged Mares was Tom Robertson with Baby I’m Worth It. Reserve was Ross Roark with Bee Jewelled. Third was Jeffrey Pait with Can’t Touch Her Guns. Fourth was Buddy Laney with Dawns Cool Girl. Fifth place was Tim Finkenbinder with Alusion.

We talked to “Penny’s” owner, Warren English, last week when he was named the World Champion in the amateur division. Click here to read his interview.