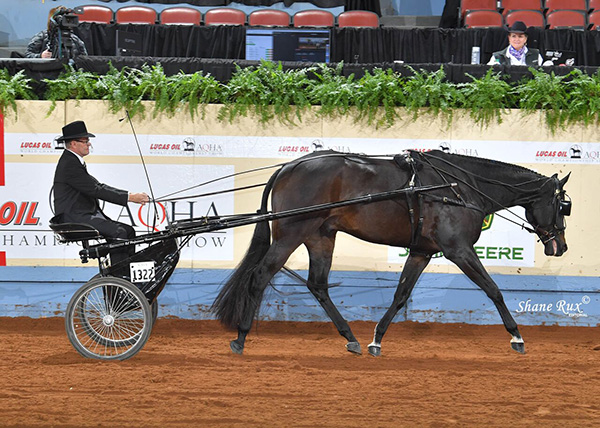 During the past week, the top exhibitors and horses from around the world have been competing at the 2019 Lucas Oil AQHA World Championship Show. The show runs through November 23 at the OKC Fairgrounds. The 2019 Lucas Oil Superhorse Award is the top honor at the Lucas Oil World. The Lucas Oil Superhorse title is awarded to the horse that earns the most points in three or more Level 3 events in three categories during the show. This year, 20 contenders competed to take home this prestigious award.

Blue Kahlua and his connections received a trailer, courtesy of Sundowner Trailers and an original Lisa Perry bronze. On November 16, Blue Kahlua, owned by Nancy Gulick of Montlake Farms LLC of Seattle, was crowned the 2019 Lucas Oil Superhorse for the second year in a row.

The 2013 brown gelding, by Chocolua and out of Exotic And Blue by Skys Blue Boy, was bred by Alyse Roberts of Tuttle, Oklahoma. Blue Kahlua was shown by AQHA Professional Horseman Chuck Briggs of Azle, Texas. The team earned 32 points by earning the world championship title in senior pleasure driving and reserve world champion titles in senior hunter hack and senior working hunter.

Gulick says the reason Blue Kahlua excels is due to his people-pleasing attitude, but he knows when it’s time to show.

CLICK HERE TO READ OUR INTERVIEW WITH CHUCK BRIGGS ABOUT BLUE KAHLUA.

The reserve Lucas Oil Superhorse is DGS Vintage, owned and bred by Robin Degraff of Port Clinton, Ohio. The 2014 bay stallion is by DGS Vestastic and out of DGS Indyspirational by Indian Artifacts. DGS Vintage was shown by AQHA Professional Horsewoman Jessica Johnson of Pickerington, Ohio, and AQHA Professional Horseman Brian Bennett of Pickerington, Ohio. The team earned 27 points by earning the world championship title in junior hunter hack and reserve world champion title in junior pleasure driving. The stallion also placed eighth in junior hunter under saddle, seventh in performance halter stallions and was a finalist in junior working hunter.

CLICK HERE TO READ OUR EC INTERVIEW WITH JESSICA JOHNSON ABOUT DGS VINTAGE.

Placing third is Dual Patron, owned by AQHA Professional Horseman Bobby Lewis of Overbrook, Oklahoma. The 2013 buckskin stallion, by Dual Spark and out of Look At Her Glo by CD O Cody, was bred by Circle Star Land & Cattle of Eagle, Idaho. Dual Patron was shown by Lewis, Joseph Harrison Of Overbrook, Oklahoma, and Cody McCartney of Ottawa Lake, Michigan. The team earned 20 points by earning the world championship title in senior heeling. The stallion also placed 10th in senior tie-down roping and was a finalist in senior pole bending and performance halter stallions.

Placing fifth is Wranglered, owned and bred by Dell and Terri Hendricks of Tioga, Texas. The 2011 buckskin stallion is by Starlights Wrangler and out of Snow White Dun It by Hollywood Dun It. Wranglered was shown by AQHA Professional Horseman Rick Rosaschi of Gainesville, Texas, AQHA Professional Horseman Luke Jones of Allerton, Iowa, and Larry Darnell of Galatia, Illinois. The team earned 16 points by earning fourth in senior heeling and ninth in senior heading. Wranglered was also a finalist in senior working cow horse and performance halter stallions.

The third- through fifth-place Lucas Oil Superhorses each receive $2,500.

About the Lucas Oil World

The Lucas Oil World is the premier event in the equine industry. The show brings together exhibitors, owners, breeders and fans of the American Quarter Horse from around the world for two weeks of exciting competition, educational opportunities and a bountiful trade show.

For more information on the Lucas Oil World, visit www.aqha.com/worldshow.

About Sundowner Trailers
Since 1976, tens of thousands of Sundowner Trailers have been pulled throughout the United States and Canada. The company’s commitment to responding to change in a positive, pro-active manner has remained strong and kept it at the forefront of innovation and design. Today more than ever, Sundowner is … America’s Trailer.