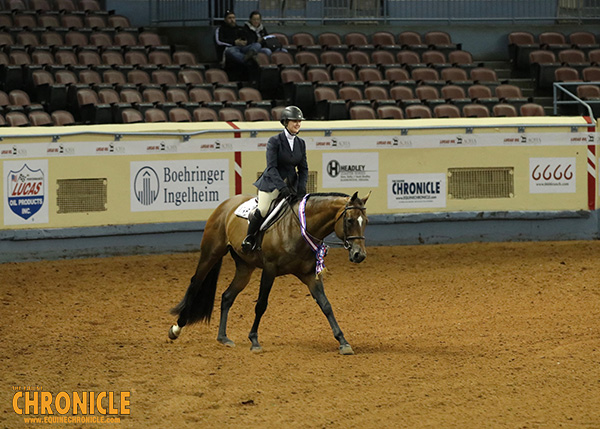 Interestingly enough, today’s World Champions in Hunter Hack have several things in common. In addition to being top females in their respective disciplines, Jessica Johnson and Lainie DeBoer were student and trainer, not too many years ago.

“She’s done such a great job with that stallion [DGS Vintage],” Lainie says. “She was my student as a youth, starting when she was eleven, and then through being an amateur. And now she’s a professional, so it’s very special.”

Jessica was in the irons of DGS Vintage to win Junior Hunter Hack, while Lainie rode DGS Don’t Tell Tales to win Senior Hunter Hack. Both ladies were the unanimous World Champions in their classes. 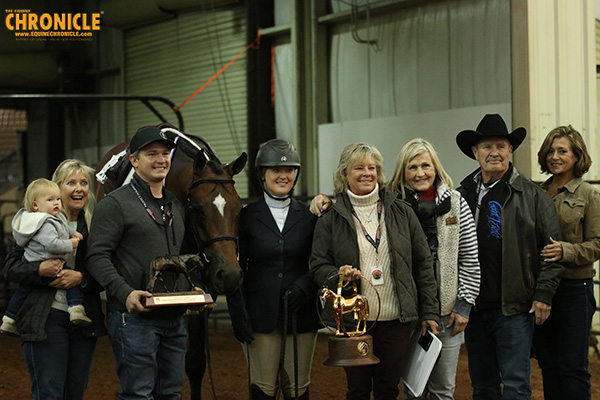 DGS Vintage is the 2014, bay stallion by DGS Vestastic and out of DGS Indyspirational, the full sister to DGS Replicated. He’s owned by Robin DeGraff.

Jessica got “Luke” in the barn at the end of his three-year-old year, and the stallion is five now. Just a few weeks ago, they won Level 1 Working Hunter at the Congress. Also here at the show, they will compete in Junior Hunter Under Saddle, Junior Pleasure Driving, and Progressive and Junior Working Hunter.

“He’s very pretty and one of the best horses to be around,” Jessica says. “He’s very quiet to be a stallion. He’s so lovely to be around every day. At home, he’s the perfect gentlemen, so I cannot wait to see his offspring. He will stand in 2020 at DeGraff Stables.” 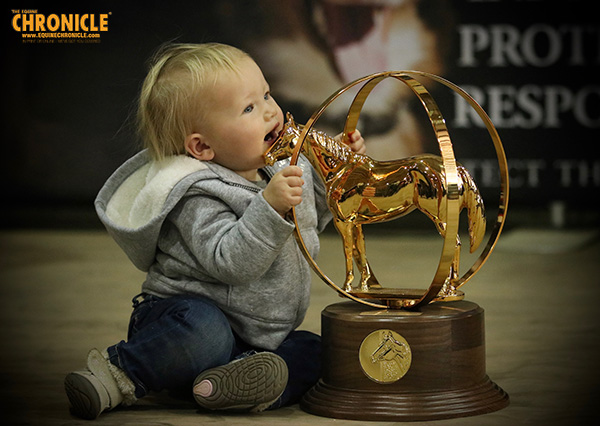 Mommy won me a trophy!

In addition to his talent over fences, Jessica hopes Luke passes along his great mindset to his offspring. “He’s so great minded and quiet, and that’s important for a Hunt Seat horse.”

Meanwhile, Lainie rode DGS Don’t Tell Tales to win Senior Hunter Hack for owner, Pam Stubbs. Lainie rode “Dillon” in the junior division last year, and this is his first year “playing with the big dogs” in the senior.

“It’s really unreal,” she says. “It was a big goal of mine. I came to this show 26 years ago, and I thought I’d study and see who was winning. Every year, we get this program and it lists the exhibitors and their World Championships, and Sandy Vaughn was the top woman at the time. I thought I need to look forward to that.” 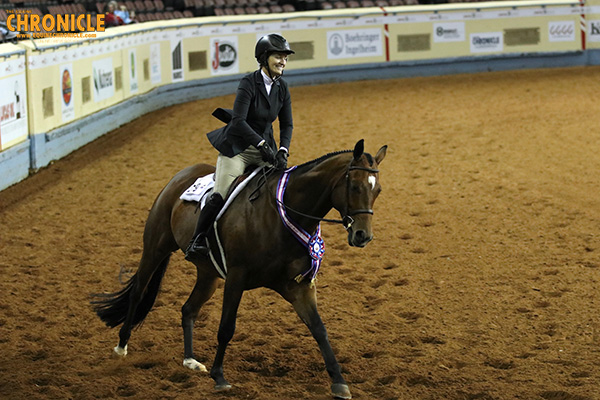 “I tucked it away and honestly didn’t think much about it. It wasn’t consuming me, and then last year it kind of hit me that I had reached 20. I waited all year to get the souvenir program. It’s probably the longest reaching goal that I’ve ever achieved. When I was a kid, I wanted to ride in the Olympics, and that wasn’t really doable; but, with this, I made my mark.”

But no rider can achieve a World Championship without a great horse underneath them, and Dillon has helped Lainie to claim quite a few of her total. 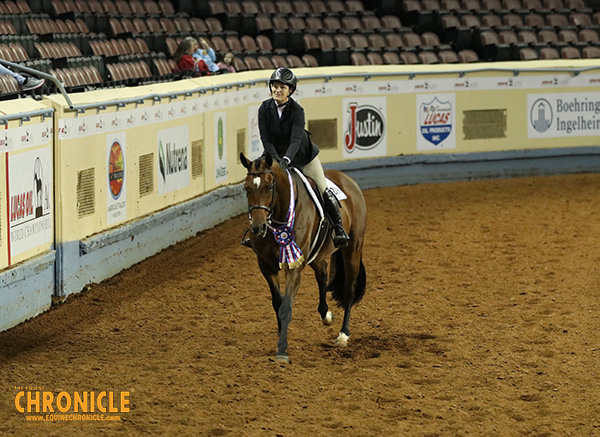 “He’s such a good show horse. He’s all business. He hands everything over to me. We have such a good relationship, because we’ve known each other for so long and he trusts me so much. He knows that I’ve got his back. I’m going to do my job, he will do his, and we will meet in the end. That’s kind of our arrangement. And then he gets lots of cookies…”

“What’s so great about him is his rhythm. He has such great rhythm at the canter, and it’s so easy to see the jumps when you’re on his back. He’s very easy to rate, and he pulls just a little on the bit. It’s just enough to say he’s there but not enough to say he’s taking over. But, I think his claim to fame will always be his showmanship.” 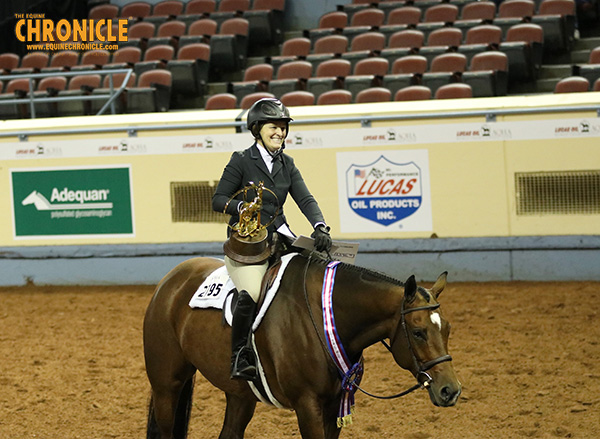 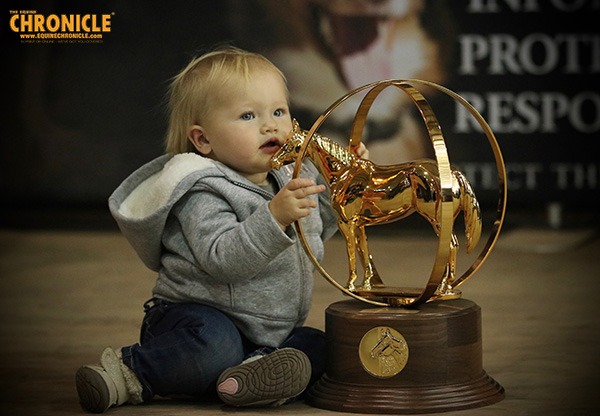 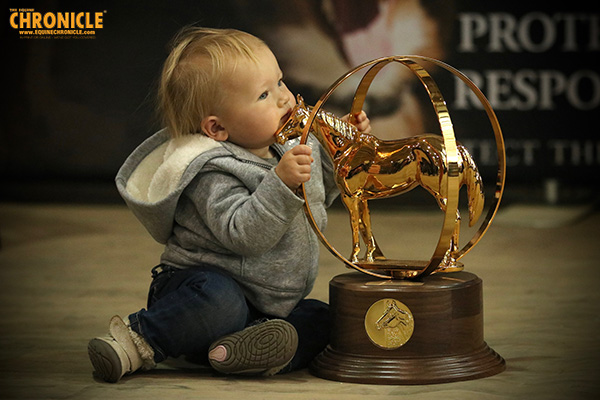 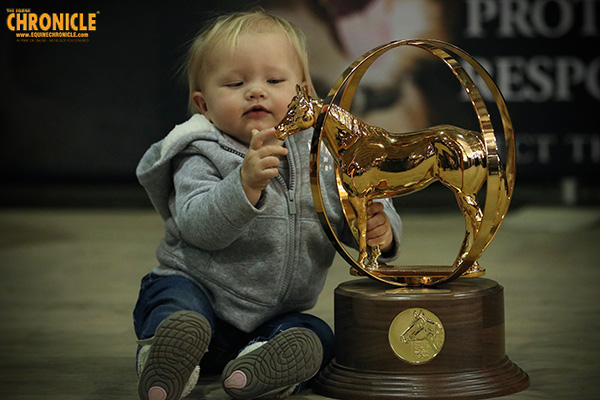 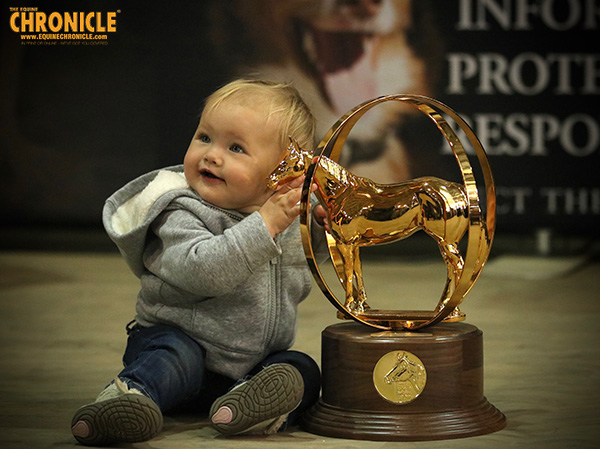 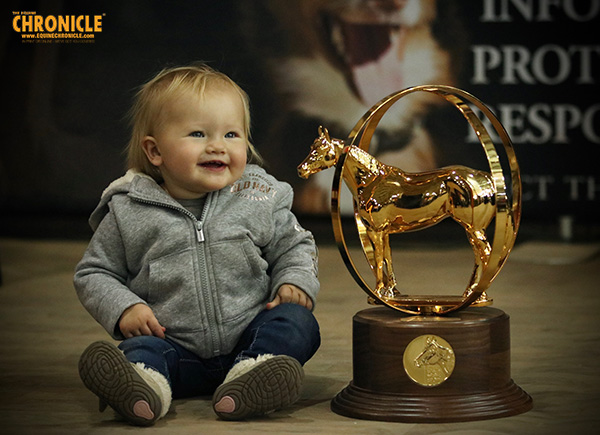