When Government Regulates the Horse Industry… 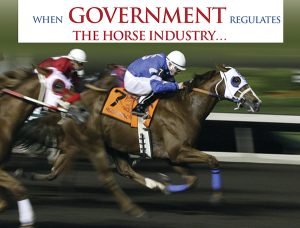 In early 2020, breaking news from New York rocked the horse racing industry as a federal investigation led to the seizure of records and arrest of a large number of horse racing trainers and veterinarians. The news placed a magnifying glass over what’s already a very controversial sport with animal rights activists.

During that time, a bill was being introduced in the United States House of Representatives that had been tried, and failed, multiple times. This time, however, it was titled the “Horseracing Integrity and Safety Act,” and it would gain the support of a political heavyweight, then-Senate Majority Leader Mitch McConnell (R) from Kentucky. By December, the bill had passed both the House and the Senate and was sent to then-President Donald Trump for his signature into law.

The Horseracing Integrity and Safety Act (HISA) was signed into law December 27, 2020, with the full effect of the passing taking place, presumably, July 1, 2022.

The act, which was passed through the United States Congress as part of a much larger, bipartisan bill, is meant to bring uniform national standards and regulations to Thoroughbred horse racing, in relation to anti-doping, medication control, and racetrack safety. This oversight is meant to increase safety at the racetracks, as well as transparency and efficiency to all states and racing jurisdictions.

The general overview of HISA says: