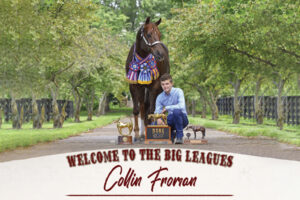 On the day we conducted this interview with Showmanship superstar, Collin Froman, it was his birthday. He’d just turned 15 years old. It’s certainly an exciting time in any teenager’s life, but more notable because of the immense success he has already achieved at such a young age.

But his recent success on the AQHA stage didn’t just come out of nowhere. Collin grew up competing on the APHA circuit and is a regular exhibitor at the APHA Youth World Show where he also has a World Championship and Reserve World Championship title to his name. In fact, he won both in the same day, in two different divisions with his mother’s horse, Beckys Last Gal.

Soon after, it became time for “Becky” to transition into a new career with the daughter of Collin’s trainer, Jenell Pogue. Also, Collin had already grown too tall for his other horse, Assets Miss Reba, so the Froman family began the search for Collin’s next all-around partner. They discovered the best of both worlds in My Dream Remembered, a 13-year-old AQHA/APHA gelding. Although Collin and “Hank” have only been a team for two years, they’ve proven to be literally unbeatable at the majors in their favorite class.