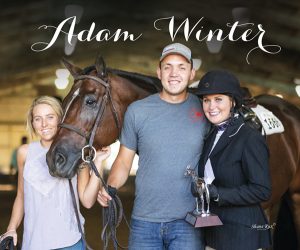 Though Winter’s family remembers him being scared of horses as a young toddler in West Branch, Michigan, the horse bug bit him early, and whatever apprehension he had went by the wayside by the age of two. “I grabbed the lead rope and never looked back,” he says. Soon after, he was competing in Leadline with his cousin, Courtney Winter, at the lead. When he was really ready to learn the ropes of the show pen, Courtney became his mentor. The two still show together today.

“Once she agreed to teach me, I was a sponge. I couldn’t get enough knowledge,” he says. “I started showing in open shows and worked my way up from leadline to loping classes.” Adam’s first horse, a grade Quarter Horse mare called Stephie, had been one of Courtney’s horses. At six years old, he was piloting her around the pen like a pro. “Every kid thinks their first horse was perfect, but she truly was. I showed her in every event there was, from Showmanship to speed events. You could pull her off the trailer in the morning and show all day,” Adam recalls.

As a season-ed show horse, 19-year-old Stephie had tricks up her sleeves, though, like anticipating the announc-er’s call and sometimes costing Adam a placing. So be-gan his first excursion into training when he had to learn to be the driver rather than the passenger. He says, “I wasn’t going to let that keep happening!”