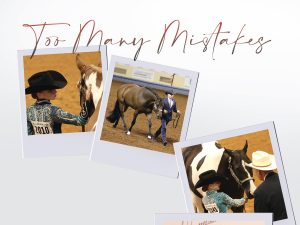 No better term exists than the word ‘precision’ to describe the discipline of Showmanship. It’s precision that separates the top showmen from the rest of the pack. It’s precision in executing a greater degree of difficulty that results in credit-earning maneuvers on the judges’ score sheets. Also, it’s precision, or the lack thereof, that can be detrimental to an otherwise stunning performance.

Like with other pattern-based classes, the devil is often in the details, and failure to be precise can not only result in lower than desired scores, but also in racking up some major faults. Even while judging some of the world’s best Showmanship exhibitors, some judges have found themselves marking faults on their cards that they’d never expect, because they are so clearly written in the rules. This has led those same judges to wonder whether exhibitors lack rulebook knowledge and proper training to execute a fault-free pattern, or if it’s the lack of precision in body placement that gets even good showmen in trouble. Here, some of the industry’s best trainers and judges share how to avoid these pitfalls.

A Look at the Rules and a Word from the Experts

As in any class, a breed association rulebook is the best place to go for guidance as to what a Showmanship class can and should look like. According to the 2020 AQHA Rulebook, “Showmanship is designed to evaluate the exhibitor’s ability to execute, in concert with a well-groomed and conditioned horse, a set of maneuvers prescribed by the judge with precision and smoothness while exhibiting poise and confidence and maintaining a balanced, functional, and fundamentally correct body position.” Throughout the three-and-one-half pages following this description dedicated to the discussion of Showmanship, the rulebook includes the words “precision” and “position” some 20 times. That, in itself, should be an indicator of how detail-oriented showmen need to be when entering the show pen and how closely judges will be evaluating the dance between horse and human that is the Showmanship class.

AQHA judge Holly Hover encourages all exhibitors to get cozy with the rulebook. She says, “A common mistake I notice is an exhibitor’s general unfamiliarity with the penalties that are clearly laid out in the rulebook. As judges, we are held accountable for those penalties, and part of being a good showman is knowing them yourself.” If any of the rules or penalties are confusing, Hover suggests seeking an explanation from a professional horseman or paying close attention at exhibitors’ meetings at high level shows.

“One of the things today’s exhibitors need to be very careful of is what’s called the location penalty. This penalty occurs when an exhibitor fails to perform a maneuver within 10 feet of the designated area. Very often, patterns at high level shows are big and open and don’t use a whole lot of cones. Instead, the pattern designates areas in which a maneuver needs to occur. For example, this might be defined as the center of the arena or a third of the way up the arena. Exhibitors need to pay very close attention to the location of the maneuver. If a back is supposed to be 10 feet, and you back two or 30, you’re jeopardizing yourself in terms of location penalties,” Hover says. She also notes that the location penalty is a reviewable penalty, one in which the panel of judges can use video footage to ensure the penalty assessed is truly an accurate reflection of what occurred in the run.

The rules state that an “exhibitor’s overall poise, confidence, appearance, and position throughout the class, and the physical appearance of the horse will be evaluated.” Acceptable maneuvers include leading the horse at a walk, jog, trot or extended trot; backing in a straight or curved line, or a combination of straight and curved lines; stopping; and turning 90, 180, 270, 360 degrees or any combination of turns. In addition, “the judge must have exhibitors set the horse up squarely for inspection sometime during the class.” Throughout all of these maneuvers, the rulebook explains that, “exhibitors should be poised, confident, courteous, and genuinely sportsmanlike at all times, quickly recognizing and correcting faults in the positioning of the horse. The exhibitor should appear business-like, stand, and move in a straight, natural, and upright manner, and avoid excessive, unnatural, or animated body positions.”

With that final sentence comes one of the most common things trainer Jenny Frid finds herself correcting. “For some reason, people try to run ‘Showmanship style.’ I spend more time taking new people and teaching them how to run like a normal person than anything else,” Frid laughs. “Sometimes, they run real upright and sometimes they crouch, and it’s just silly, right? So I ask them, ‘How would you run if you were going jogging?’ You’ve got to do what’s natural for you and not try to emulate some Showmanship run you saw somewhere. It’s surprisingly hard to be natural. So, I’ll take their horse away and tell them to run, then ask them to steady their arms up and run just like that.”