The West Twins – Same, but Different 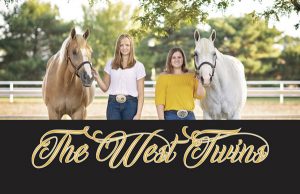 When Christine West discovered that she and her husband, Jeff, were having twins, she went to work researching how to raise twin girls with a sense of individuality. She learned tricks like letting each girl have her own birthday cake and allowing them to develop their own style. This way, Katherine and Elizabeth had common traits, but different personalities.

Growing Up a Twin

Having a sibling is like having an ever-present friend to play with. But, having a twin is like having a copy of yourself as a built-in best friend. That’s how the West girls see it anyway. “I couldn’t ask for anything better [than growing up with a twin],” Katherine says. “It’s nice to know that Elizabeth is always there supporting me. It’s nice to have someone I can always count on.”

On the same wavelength, Elizabeth agrees with her sister. “We’re pretty similar, but we’re also different,” she says. “We have similar friends and do similar activities, but I play basketball for our high school and she plays tennis. With our similar school schedules, we’re around each other a lot, but we still get along well with each other.”

The sisters are both seniors at Williamston High School in Williamston, Michigan, a school just minutes from their home. Both are in high-level academic classes and are leaders on their school sports teams: Elizabeth is on the basketball team and Katherine is on the tennis team. They’re active within their high school and the Michigan Quarter Horse Youth Association, where they have taken turns serving as president and vice president on the board. This year, Katherine is the president and Elizabeth is the vice president. Katherine is also the student body president in their high school and Elizabeth is the senior class secretary.

Their drive for excellence both in academics and outside of school comes from their parents, the sisters say. “Our parents’ drive and success is something that I’ve always looked up to and is something I want for myself,” Katherine says. “I want to be as successful as they have been.”

“Our parents are our biggest supporters, no matter what we’re doing,” Elizabeth says.

Their love of horses was spurred by their mother, Christine, who grew up on an Angus cattle farm where she showed cattle at the national level and horses locally. While in graduate school, Christine competed in Cutting. It was her retired Cutting horse that the twins first started riding around their grandparents’ cattle farm. Christine knew that she wanted her daughters to grow up surrounded by the same passion she did.

“I thought that growing up with horses was beneficial for me,” Christine says. “Some of the experiences that I had had growing up–I feel–helped shape me as I went through school and then college. I feel there is a lot of benefit from being active in livestock and youth associations, not just in terms of showing, but also with leadership skills.”

The girls first started taking lessons with Christie Showerman at her North Fork Farm in Webberville, Michigan, where they learned the basics of horsemanship and built on their skills.