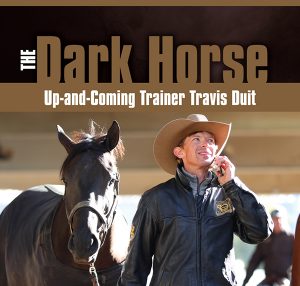 Travis Duit’s first experience in the horse industry was breaking colts for a neighbor who was in the business of “dealing ponies.” At the time, he was a teenage bull rider. Apparently, to both him and his then employer, if he could stay on a bull, then he should be able to break a colt as well. Though the logic may have been flawed, the experience was Duit’s stepping off point into an industry in which he has since made great leaps and bounds.

Interestingly, when he started breaking colts, Duit didn’t really even know the pleasure horse world existed. He had ridden bulls for many years and, as an early teen, got his first horse – a gelding named Joker that was sold to his family as, more or less, a cripple. Evidently, the horse had some scar tissue in his hock that could be problematic. It was a fact that made him appealing to Duit’s parents, who were a little leery of putting their kids on any horse that might have some get-up and go. But, much to their chagrin, both Duit and Joker had the heart to overcome any obstacles in their path. Against all odds, they began to excel in gymkhana events, particularly the flag race.

“Despite his injury, that horse could move. We traveled all over the country, and that horse really learned to run. It was something crazy. He just had so much try! He gave everything he had every time you needed him. That was really my first connection with an animal, and it got me hooked,” the Iowa native recalls.

It wasn’t until he was nearly 20 that Duit first got a glimpse of the pleasure horse industry. At that time, he was breaking colts for Gary and Chad Lindeman of Ackley, Iowa. He embraced the opportunity to travel to horse shows and realized that training pleasure horses might be something he could set his professional sights on. So, he began seeking out opportunities to do exactly that.

He spent a short time at Whistle Stop Ranch in Palmer, Texas and then began working for Steve Heckaman, where he got a deeper look into the life of a Western Pleasure horse trainer. “Steve opened my eyes to what the industry was and what went into the business part of it. That was my first real taste of AQHA. I got to go to a few horse shows and just realized, ‘Man, this is the life.’ This is exactly what I want,” Duit says.

From that point forward, Duit made it his mission to learn as much as he could and work as hard as possible to join the ranks of the elite. Compared to many of his fellow contemporaries, many of whom are born into the business or began their show careers as small fry competitors, Duit was starting his show pen career in his 20s, with far less time and experience. During his employment with Heckaman, Duit was able to ride a lot of horses and was ready to absorb as much as he could. Heckaman, who was “not shy to coach you on good horse training,” as Duit recalls with a laugh, was a great mentor in his early training years.”