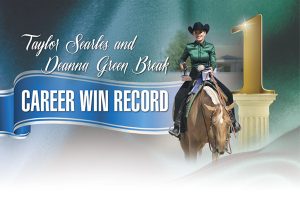 Taylor Searles and Deanna Green will be familiar names for most of our readers as the two ladies have displayed excellence throughout the Youth and now Amateur division of AQHA competition for most of their lives. They have extended that dominance to the National Collegiate Equestrian Association arena as well, competing for the Western Team of Auburn Equestrian. Recently, both girls broke the record for the most career wins in program history at Auburn University, where they are both seniors this year.

Taylor and Deanna entered the 2021 SEC Championship tied for second in the number of career wins at 40 apiece. After they both scored wins during the semifinals meet against South Carolina, they tied the record of Lauren Diaz with 41. The next day, they both helped Auburn win its third straight SEC title and broke the record with another win each, totaling 42.

We spoke to both ladies to find out more about this historic achievement, which is made even better by the fact that they are the best of friends.

“We were super excited to go into SECs this year with the group of girls we had,” Taylor says. “Preparing for it, we knew we were ready, and the whole team was super focused on the goal of winning rides. Everyone rode really well, and the team had our backs the whole way. It was a little different than in years past with the fans, due to COVID restrictions, but you could definitely tell that the Auburn parents were there, because they’re so loud and supportive.

“I knew Deanna and I were close to breaking the record, but I refused to look. Lauren Diaz [the holder of the previous record] actually texted me after the last regular season meet and asked me to let her know when we were about to break it so she could be there. I told her I had no idea, because I was scared to look. After the semifinals at SECs, Kendra, the team media manager, came up to me and told me congratulations on tying the record. I laughed and said, ‘Don’t tell me that! Now, I’m nervous!’ I tried to block it out of my head and just ride the ride the next day; because, at the end of the day, it was more important for me to get the point for my team than to break a record.”