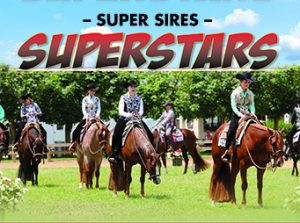 The Super Sires Western Pleasure program has a mission to foster Non-Pro riders of all skill levels and support the breeding of quality bloodlines. The program is living out its mission in 2019 with the presentation of significant cash and prizes in three Super Sires Western Pleasure classes that were held at this year’s Tom Powers Triple Challenge Futurity.
This year, the Western Pleasure Super Sires held three classes, which had 19 entries and a total payout of $54,690.91 Doing a little fast math, that’s approximately $2,878.46 in award money per entry at this event! Further, the Western Pleasure Super Sires program is unique in its dedication to supporting and promoting classes with large payouts for Non-Pro exhibitors. We spoke with the winner of each of the three classes that ran at this year’s Tom Powers Futurity to find out more about their newly crowned champions.
Nancy Wilkerson-Ditty and A Cowboy For You 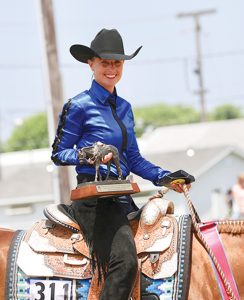 Tell us about your involvement in the Western Pleasure Super Sires Program over the years:

Wilkerson-Ditty: “I’ve been a huge supporter of the Super Sires program for many years. Super Sires is a one-of-a-kind program with the industry’s largest purses for a Non-Pro exhibitor. My family, Stanley and Susan Scott, of Haylo Farm, look yearly for the best breeding matches for their proven mares, and we always take into consideration what programs the stallion is eligible for.”

Tell us about your horse:

Wilkerson-Ditty: “My yearling, A Cowboy For You, aka ‘Lucky,’ is out of Congress Champion and Congress Champion producer, Huntin For A Cowboy, and by VS Code Blue. From day one, Lucky has impressed everyone with his beautiful topline, impressive lift, and softness in his movement. To be honest, Lucky has made my job of preparing him very easy. He comes out every time consistently and shows off his natural abilities.” 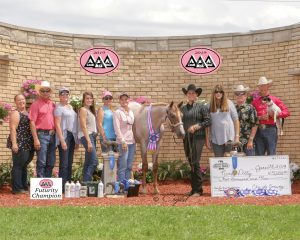 What makes this win special?

Wilkerson-Ditty: “All of the wins with him this year have been very special, because Lucky was born and raised at Haylo Farm and I have done all the prep work to get him to the show pen. Although, I really believe he knew from day one that he was born to be a star. It has been great to have a stallion owner such as Jan Pittman and Pittman Ranch show so much support for her stallion’s kids.”

What does the future hold for this Super Sires Champion?

Wilkerson-Ditty: “First, thanks to all the judges who also believed in Lucky at the futurities this summer. We have one more stop at the All-American Quarter Horse Congress with Kathie Kennedy showing him in the Open Yearling Longe Line and with myself in the Non-Pro. I’ve already been scoping out the weanlings for next year to present in the Super Sires program…” 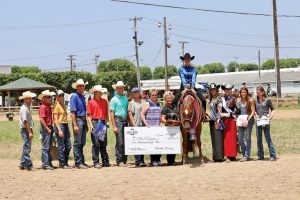 Tell us about yourself and your involvement in the Western Pleasure Super Sires Program over the years:

Galyean: “I’m married and the mother of two boys, Garrett and Brody. Every year, I try to find a horse that’s eligible to compete in the Western Pleasure Super Sires events because they really support Non-Pros.”

Tell us about your horse:

Galyean: “We purchased Southern Dreamin, aka ‘Tebow,’ in early June. He just has an incredible lope and a really steady topline. Aaron Moses had him in training. To prepare, I just tried to ride him like he had trained him. Tebow is sired by Its a Southern Thing and out of Always in Yer Dreams.”

What makes this win special?

Galyean: “Winning the Super Sires means a lot for a couple of reasons. One, I’ve always enjoyed showing in Berrien Springs, and, two, the payout!” 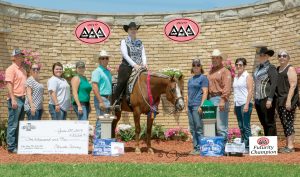 Tell us about yourself and your involvement in the Western Pleasure Super Sires Program:

Corda: “Horses are in my blood. My parents raised horses for years, as they owned Dakota Te. So, from a young age, I got to start showing in futurities on horses that we raised. I did this all through my youth career. After that, I showed in the open until there came a point where I had to give up the horses. When I got to the time in my life that I could get back into showing, I reached out to Angie and Charles Cannizzaro, of CAC Show Horses. I had watched Angie from afar for a few years and really liked her work ethic and the way her horses showed. When she called me and told me that she had found the perfect horse for me to get back into showing, I was thrilled.” 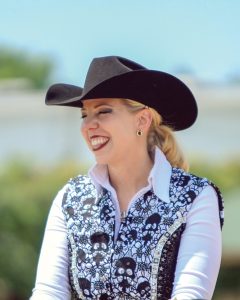 Tell us about your horse and what makes her special:

Corda: “I bought ‘Burnedette’ from the Leeman family at the end for her yearling year. She then went straight to Angie to get started. The plan was to start her and see if she would make a two-year-old. If not, it was no big deal, because we would just show her as a three-year-old, aiming for the Super Sires Class at The Tom Powers. I got a call from Angie in April of Burnedette’s two-year-old year saying how quickly she was coming along. If all went well, I’d be able to show in the two-year-old classes at the NSBA World Show. I was so excited and nervous because it had been 10 years since I showed and now there was the possibility of showing at the NSBA World Show. Burnedette is so good at her job, because she’s great minded and has both gaits. She just naturally wants to please and will go around as asked. She really took care of me as a two-year-old. Getting back in the ring on her was a confidence boost for sure.” 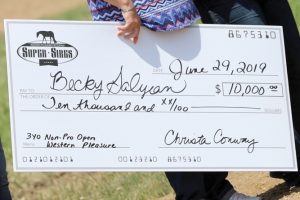 What makes this win special?
Corda: “At the start of her three-year-old year, the goal for sure was to make it to the Super Sires class at Tom Powers. I live in California, and with Angie being in Oklahoma, it makes it challenging to ride. Luckily, I live close to Melissa Zanetti of Zanetti Performance Horses, and she was willing to let me come ride two days a week with her to get myself back in show shape. I know, in my heart, that if that was not possible, I wouldn’t have been able to show like I did, not only physically, but mentally as well. I was beyond thrilled when I won the class. I never dreamed of being able to win a class like that. It was not only because I’ve never competed at that high of a level in a futurity before, but also because I hadn’t shown but once in the last 10 years. I think what made it even better was all the love and support I had from my family, friends, and Angie and Charles and their entire barn.”

What else would you like to say about your experience winning this Western Pleasure Super Sires event?

Corda: “Without a doubt, I would love for my next futurity horse to be eligible for the Super Sires program. There is no other program that offers this type of incentive. It’s a very well run program and it is, without a doubt, the most generous with its cash and prizes.”