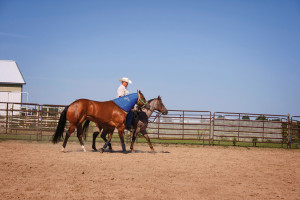 A horseman’s time is valuable and limited. When multiple horses need to be exercised, and you have a jam-packed schedule, one way to double your efforts is by ponying. This practice is seen a lot in the early morning hours at horse shows—a trainer riding one horse while leading another. It’s also popular among halter horse trainers as a method of exercising horses that aren’t generally ridden under saddle.

Most halter trainers start working their horses as weanlings by getting them used to a routine at home. Multiple World Champion trainer and exhibitor, Ted Turner, starts foals around five months of age by using his John Deere Gator before introducing them to the pony horse. Turner will drive the Gator and have an assistant hold onto the foal while sitting in the back. They’ll use a rope around the foal’s rear end to encourage forward motion.

Argyle, Texas-based trainer Buddy Laney likes to start his foals with a horse, and he begins slowly at a walk. “I don’t like to pound on them,” he explains. “[Ponying] is good exercise and teaches [the foals] patience. I think [ponying with a horse] helps foals learn patience and control by being around other horses. It puts them on a path of where they need to be when they get to a show.”

The most important component of ponying horses is having a solid partner. “You want a good pony horse that’s settled, seasoned, and nothing bothers,” points out Turner.

“I think the worst thing anyone can do is get a pony horse that’s not broke,” Laney says. “You can get horses that pull back. If you have a pony horse that’s really sour, one that pins his ears and wrings his tail, you can’t expect the ponied horse to trot beside you in a well-behaved manner.”

If you’re looking to pony your horse at a show, the best idea is to start early in the morning. Trainers like Landon, Turner, and Laney can be found in the warm-up arenas as early as 4:30 a.m., especially if they’re at larger shows such as the All-American Quarter Horse Congress.

“The easiest and best way [to pony] is to wake before everyone else and get your work done early,” Turner says.

Landon agrees, saying that the earlier they’re in the arena, the less of a chance there is for accidents. This is true especially when it comes to sharing the arena with those who might be longing, practicing Showmanship or Horsemanship patterns, or just riding around.

“Accidents do happen,” he says. “I’ve seen horses kick out. Somebody might be right behind them and the pony horse kicks out. It’s definitely tight quarters.”

While the AQHA World Show offers a place for those to pony their horses in Arena 3 in the mornings, there isn’t a designated place for ponying at the Congress. So time management is a must for trainers.

“There are times that some guys will turn around and go the other way, but I’m right-handed and I have more control with my right hand,” explains Landon.

When it comes to passing, riders should strive to keep a proper distance for safety reasons. “I always try to keep the horse I’m ponying on the outside. That way you can keep a clear view of your horse and the fence on the other side,” explains Laney. “Also, you can keep your horse from reaching out and kicking someone.”

“If there’s room, and it’s safe, I’ll cut across the pen instead of going around,” he says. “Every horse conditions differently—you might have a horse that you want to work really hard and you might want to work him at a long trot. Every horse trains differently. If I’ve got one that’s going along well, and it’s clear, I’ll cut across the center to change directions. If you pass, you take the chance of that horse kicking out.”

Turner points out that communication between riders is key, especially when it comes to passing. “Always respect your trainers and partners,” he says. 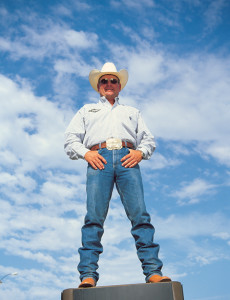 When ponying, the ideal situation is to have the ponied horse’s head by the rider’s leg, with just a little bit of slack in the lead. This position allows for more control.

“I don’t want [the ponied horse] ahead of me,” points out Laney.

Laney, being a roper, will only dally his rope if the horse is prone to pulling back, but he points out that he won’t tie the lead to his saddle horn. He just wraps it around once or twice. Most times, though, he’ll just hold onto the rope to maintain control, as does Turner and Landon.

“If your ponied horse takes off, and you’ve dallied that horse and he has a chain on, that’s not a good deal,” Landon says. Your best bet is to hold onto the lead, leaving about six inches of rope between your hand and the horse.

Chains are commonly used for ponied horses to provide a little more control. Most often the chain will be run underneath the chin or over the nose, just like a halter trainer might use when working a horse on the ground.

“It depends on the horse, whether the chain goes over [the nose] or under [the chin],” Turner says. “Some horses don’t like the chain under the chin, which causes them to sit back.”

However, when working with weanlings or other young horses, Laney points out that a regular lead rope is sufficient.

There are different forms of ponying, and some trainers even work their horses off golf carts or other motorized vehicles. There’s a debate on how safe this practice is and some horse shows have banned the use on the fairgrounds, but others still use carts at home.

Turner advises extreme caution when ponying off a golf cart. At his Aubrey, Texas ranch, he has one person drive while he sits on the back end and holds the horse, only working one horse at a time.

“You’re asking for too many problems if you’re doing it by yourself,” he says.

Most of the larger shows have banned the use of golf carts for ponying, citing safety concerns, and echoing the thoughts of trainers like Landon when it comes to handling heavy arena traffic.

“I do really like that they’ve stopped allowing people to pony from a golf cart at shows—it can be very dangerous,” Landon says. “At home, it’s fine. It’s just not smart at a show. There’s nothing wrong with [ponying from a golf cart at home], I just think it’s safer on a horse, especially when you’re at a horse show,” he says.

Also, there’s a debate about whether or not to pony multiple horses at once. All three trainers agree that it’s best, and safest, to pony only one horse at a time.

“I’ve seen some performance horses ponied two at a time, with one on each side,” Landon says. “Personally, I wouldn’t want to do two halter horses like that.”

The average length of a ponying session varies depending on the horse and the environment, says Turner and Laney.

“It’s like a person who says they’re going to run 10 miles, but then might not feel well,” Laney explains. “I let the horses tell me what they need, as far as the amount of time we pony. At shows, it might also be more stressful, which takes a lot out of a horse.”

Landon urges caution to those who might offer to pony someone else’s horse at a big show like the Congress.

“What I’ve run into before is someone who asks if I can pony their horse so they don’t have to stand in line [to longe],” he recalls. “Five years ago, a lady told me her horse was broke to pony…but he wasn’t. Instead of letting go of the horse, when he kept pulling, I tore my rotator cuff and was out of commission for seven months.”

Even the best-laid plans can go awry, and it’s up to the rider to keep a cool head and control the situation. Laney suggests using your control as a rider to bring the ponied horse back to you while slowing down your pace—if you’re long-trotting, jogging, or walking. Take the time to wait until the horse comes back to you and is comfortable. “I don’t try to rush anything,” he says. “I’ll let them walk slow until they get comfortable again. Then, they’ll usually come right back up beside you and be fine.”

If you can’t get a horse to calm down by slowing the pace, Laney suggests turning in tight circles, with the ponied horse on the inside, until the horse loosens up and is ready to move forward. Still, there are those situations when it’s better to let go of the rope for the safety of yourself and the horse you’re riding.

While ponying can be an easy way to work your horses at a show without having to stand in long lines to longe, follow the lead of these top trainers by doing your homework first. Work slowly to get your horses comfortable with the closeness and action of being ponied before introducing traffic. Then, try to avoid the high-traffic times in the arenas, which can add stress to what can already be a stressful situation. Following these simple tips from some of our best professionals can help you avoid an accident.