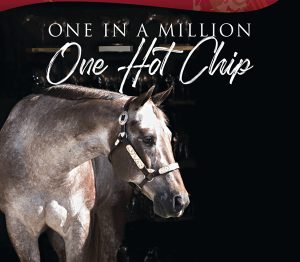 In addition, Jackson was inducted into the ApHC Hall of Fame in 2016 for his outstanding accomplishments in the show pen. He capped off his long and illustrious career with a stellar performance at the 2017 National Horse Show by winning Non-Pro Horsemanship and Western Riding with Brooke Bancroft, as well as the 2018 Non-Pro World in Horsemanship and Western Riding as well. In 2018, he also won Masters Trail, Masters Western Riding, and Reserve High Point with Jennifer in the saddle.

Jennifer Hulcher and Brooke Bancroft, Jackson’s owners within the Hulcher family, each piloted him to his final World Titles in Non-Pro Western Riding and Masters Western Riding during the 2020 ApHC World Show. Hulcher says, “What a way to end his illustrious show career by closing this chapter in his life.”

One Hot Chip is one of those special horses that’s so solid in his job that he could basically phone it in. But even well into his senior years, Jackson always delivers. Entering the show pen with a flair for performance combined with steady reliability, he gives his all, making him a joy for Hulcher and her daughter to compete with. Back in 2012, when Brooke was ready to move up from her Radical Rodder walk/trot horse, “Barbie,” Brooke and Jennifer traveled to Ocala to look at Jackson with then-trainer, Shane Christensen. At that time, Jackson had been described in his younger years as a “handful in his youth,” “opinionated,” and even “ornery.” Those types of descriptions might give pause to a buyer looking for a family show horse, but Hulcher grew up with Appaloosas on her family’s ranch, The American Horseman, in Pilot Point, Texas, and she knew what they were looking for.