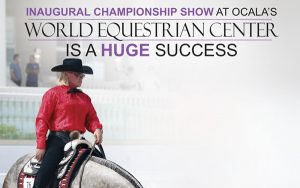 The World Equestrian Center in Ocala, Florida held its inaugural Championship Show from September 29th to October 10th, 2021 where $2,000,000 in cash and prizes were awarded. Of the facility’s available stalls in its 25 barns, 3,000 were sold for the show. Exhibitors traveled from both coasts and everywhere in between to compete for big money and exciting prizes.

“We had a great turnout. The numbers were big–bigger than most other shows–and we want to be sure to thank those who attended,” Greg Wheat says. Wheat, along with WEC-Ocala’s owner, Mary Roberts, and a comprehensive team, helped coordinate the show. “There was a lot of money given away–more than anywhere else–and most of the winners took home money here than they won anywhere else all year. We’re just going to keep working on making it bigger and better,” Wheat says.

Though highlights were many, perhaps one of the most exciting events of the show was the 15-18 Horsemanship Challenge. The champion won a $60,000 GMC truck! Hanna Olaussen of San Antonio, Texas, piloted her horse, Wearin Only Moonlite, to win that coveted prize. The class awarded a trainer bonus of $5,000 to Brad Jewett.

The show also highlighted two Freestyle Reining classes, and it was the first show in the industry where Limited Trail was offered in the Open, Non-Pro, Amateur, and Select divisions. Everyone in attendance had the opportunity to go home a winner with various luck-of-the-draw prizes and raffles, including a raffle for a brand new Harris Leather & Silverworks saddle. Dr. Leah Van Blarcom was the winner.

The show’s second year promises more of the same excitement with some improvements that are still in the planning stages. One of those changes is bringing Kathy Avolt, owner of An Equine Production, in to manage the show. “Kathy has lots of knowledge of the horse show world, and she’ll help us run a smoother, more time-efficient horse show,” Wheat says.

Avolt couldn’t be more excited to be involved with the show next year. “We’re honored whenever we go someplace new. We’re very excited about working with them. It’s a remarkable facility, and there is going to be great prizes, so what’s not to love?” she says. “The show is a game changer in the sense that it has a class for anyone showing a stock horse, and it gives true Hunter exhibitors the opportunity to come over to our world and show.”

Words from the Winners