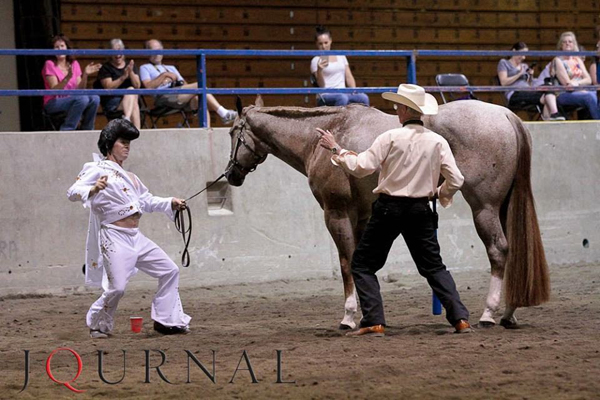 They say the horse show crowd is family, and for David and Karen Haring, nothing could be closer to the truth. 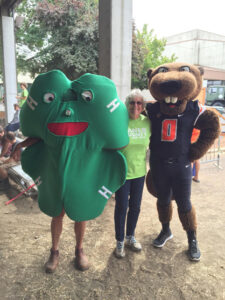 Lucky the 4-H Clover, Karen, and Benny the OSU Beaver – Dave is wearing the Lucky costume.

Neither David nor Karen had ever owned a horse, let alone attended a horse show, until their horse-crazy daughter Karissa came along.  They finally relented and bought her a pony, and her interests and talent eventually blossomed into a successful youth show career.

After her last youth show in the year 2000, however, the Harings realized how much they missed being with their friends, explains Karissa Landis. “Both of them got into working at the shows, and they have done it ever since.”

Today they are both cherished among the horse show crowd, and the news of Dave’s retirement at age 82 after 20-plus years of scribing hit the horse community hard. However, theirs is a story of a much bigger picture of the horse show family.

As a child, Karen had always wanted to ride, but her parents couldn’t afford it. Karen graduated high school, got married, had two sons, and later divorced, working as an Escrow and Title officer to support her family. “Eventually she became a Real Estate agent and sold real estate in the Willamette Valley in Oregon,” Karissa notes. 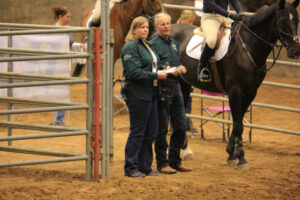 Karissa’s dad, Dave, was born and raised in an affluent area on the East Coast, earning his pilot’s license at age 16.  “He enrolled in ROTC, and went straight to college after high school where he earned a Masters degree in Mathematics. After graduation he became a pilot in the Air Force and served in Vietnam flying B-52s,” explains Karissa.

Dave and his first wife had three kids together, but they also divorced. After his divorce, Dave remarried to his second wife, who had three children from a previous marriage.  After his Airforce service, the family moved to Oregon and the couple later divorced.  But, says Karissa, he remained a father to all six kids. She reveals, “He never believed there was a difference between biological children and his “bonus children” and he absolutely claimed all 6 as his own.”

Dave began working as a commercial pilot in the 1970’s, but when he was laid off during the recession, 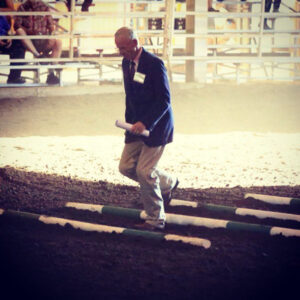 he worked as a real estate agent, and he met Karen.  “While my mom was a superb realtor, my dad was awful,” Karissa laughs. United Airlines rehired him, and he became a Captain for United until his retirement in 2000.

Dave and Karen were married September 8, 1979, with their 8 combined kids as the bridesmaids and groomsmen, and they purchased a farm in Oregon’s Willamette Valley, where Karen had been raised. Karissa came along in August 1981, convincing her non-horse parents at age 7 to buy a pony, then joining 4H at 9 years old. It was then Dave started to volunteer for their local 4H program.

Karissa began showing AQHA at age 13, and she says their lives were changed. With her parents full support and encouragement, she fulfilled many association leadership roles including an AQHYA regional director position, and she showed locally and at most of the majors multiple times, including Sun Circuit, Quarter Congress and AQHA Youth World.

She graduated in 1999, and her last Youth World was in 2000, the same year Dave retired from United.  “After spending 6 years traveling in a motor home to horse shows, meeting friends who became family, and suddenly having far too much time on their hands, my parents couldn’t stand to leave their horse show family behind, so they began working at Oregon QH shows,” Karissa explains.

Eventually 6 granddaughters began showing 4H, 5 went on to show in Oregon High School Equestrian Teams (OHSET), 2 of them also showed some in OQHA, and 1 showed some in APHA, Karissa explains. 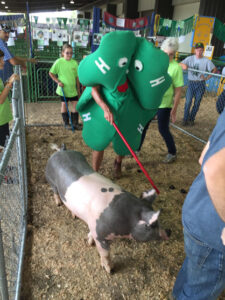 David aka Lucky showing a pig.

So the duo became seasoned volunteers with the Clackamas County 4H Horse Program and the Oregon 4H Horse Program, finishing this year as 32-year veterans as Oregon 4H volunteers. Dave and Karen became dedicated volunteers in OHSET as well, continuing their volunteer roles long after their granddaughters had graduated.  They were honored in 2010 with the Friends of 4-H Award.

“Throughout 4-H and OHSET Dad is known as “Grandpa Dave” by the kids and volunteers,” Karissa explains. “He is the first one to offer a handkerchief to an exhibitor with tears, and though he doesn’t have the expert horse knowledge, he is always the first one to go stand with a nervous horse/exhibitor to keep them safe. Dad is probably most famously known for his antics during 4H championship classes where he ALWAYS put on a nice suit and tie (with boots) and would commonly “demonstrate the pattern” (on foot with flying lead changes and all). This would almost always garner enthusiastic cheering from all watching which would egg him on even more.”

When they weren’t volunteering, Dave and Karen worked at local Quarter Horse shows, and they would travel to Sun Circuit in Arizona to scribe and score check. “In 2015, Dad was named “Best Ring Steward” by OQHA and given a custom belt buckle. This year, dad was inducted into the OQHA Hall Of Fame for his tireless work over the last 20+ years,” Karissa explains. 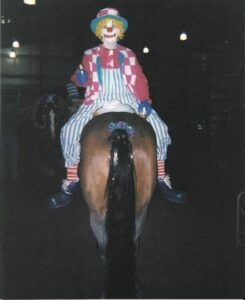 Dave in the OQHA Costume Contest.

She says other notable awards for Dave include the 2-time winner of the OQHA Costume Contest (a fundraiser by the amateurs). “For his first win, he was dressed in his full captain uniform riding my horse that we had turned into a plane with wings and all. For the second win, Dad and the husband of an exhibitor (and friend) dressed in head to toe clown costumes (including face paint). Dad rode BACKWARDS on my horse while Bob rode his wife’s horse and ponied my horse with Dad.”

A Shift in Plans

Dave’s recent retirement announcement came on the heels of Karen’s diagnosis of Alzheimer’s earlier this year at age 74, a major factor in his decision. The couple also celebrated their 43rd anniversary this month. “Dad was, of course, at the horse show on their anniversary,” says Karissa, “as they both have been for the last 20+ years, but for the last 2 years (including this year) Mom wasn’t with him. This year, she celebrated with my sister, who spent the weekend with her.”

When Dave’s retirement was announced on the Equine Chronicle Facebook page earlier this month, good wishes and happy memories for Dave to cherish into this retirement overflowed.  Just a few of the many follow: 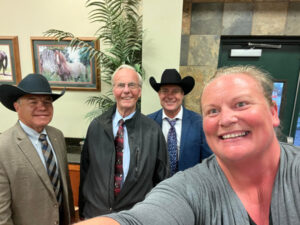 Editor’s Note: I had the extreme pleasure of working with both Dave and Karen at Arizona Sun Circuit for many years, and I found them to be the ultimate professionals who were respected and loved by everyone. I recently learned the Karissa I know as a talented horse show photographer is also Dave and Karen’s daughter. I wish them all the best and thank Karissa for sharing their story. ~Online Editor Delores Kuhlwein.