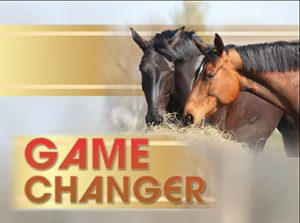 You know the signs: ears pinned, wringing tail, begrudging attitude. It’s a sure bet that your mare is in heat and your riding session might not go as smoothly as you had hoped.
Undesirable estrus-related behaviors are the bane of any mare owner’s existence. Because of that, many mare owners search for ways to suppress that behavior in hopes of a friendlier equine teammate, not only for the sake of their horse show performance, but also for the safety of the rider. In most cases, a synthetic hormone is given. Sadly, a safer, drug free approach hasn’t been an accessible option. That is, until now.
Thanks to the research of Carlos Gradil, DVM, PhD, Dipl. ACT, professor at the University of Massachusetts in Amherst, a simple implant, barely larger than a quarter, can change the game for mare owners worldwide. 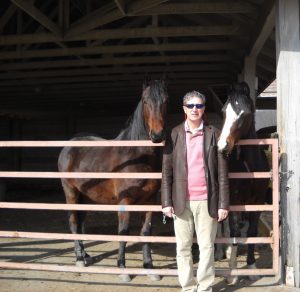 Prior to Dr. Gradil’s research, many mare owners would employ the use of progesterone (the estrous cycle’s dominant hormone) or oxytocin to suppress estrus. In an attempt to go a more drug free route, owners would even insert glass marbles to trick the mare’s reproductive system into thinking there was a viable embryo. However, this option wasn’t always the safest.
“The problem with marbles is that most of them were glass and they could break and cause problems,” Dr. Gradil says.
Marbles have also been known to cause inflammation and infection. They can also adhere to the uterine lining of the mare, shatter, or become lost within the mare for years at a time. These issues meant possibly compromising a mare’s future fertility.
“The second problem with marbles was that you had to be a vet to take the marbles out. Also, you could only put them in the uterus when the mare was close to her cycle, because the cervix would be open,” he says.
On the other hand, a synthetic progesterone product like Regumate is commonly used across all breeds and disciplines to regulate a mare’s cycle. It’s available via a veterinarian’s prescription and is administered daily via the mare’s feed or directly on the base of her tongue. However, the U.S. Food and Drug Administration (FDA) has warned of potential health risks in humans if there is skin exposure to synthetic progesterone. Adverse effects in humans include abnormal or absent menstrual cycles, headaches, abdominal pain, nausea, and rashes in women and girls.

Drug-Free: The Way to Be

Because most countries are setting hard boundaries on drug use in horses, including the use of synthetic progesterone, horse owners are looking for a safer, drug free option for their mares.
“The idea behind my invention is very simple,” Dr. Gradil says. “It’s all based on magnetic physics. Three pieces assume a stable magnetic field strength, and you insert them into the uterus, one by one. Once the three pieces that comprise the devices are inside, they take on the shape of a triangle, which is the state of lowest energy, and therefore they cannot come apart.”
Unlike marbles, Dr. Gradil’s intrauterine device (IUD) can be inserted at any time during the mare’s cycle using an applicator similar to a tampon for humans. They stay in place until they are removed via the same applicator, which has a magnet as well.
“Marbles can be expelled. You’ve heard the phrase, ‘I’m losing my marbles.’ You could literally lose the marbles inside the mare,” he says. “In many cases, you don’t know if you’ve lost the marbles or if they’ve just moved.” He explains that because of physics, weight, and the magnetic field of his three-part implant, the IUD stays in place. Furthermore, the location of the device can be checked with a simple, handheld magnetic wand, the likes of which can be seen at an airport security line.

Once a mare has this IUD in her uterus, she is considered to be“pseudo-pregnant,” because the implant tricks the mare’s body into thinking she’s pregnant, and she’ll produce her own natural progesterone. The modulation of the estrous cycle can last five to seven months. He advises that there is a better response if the implant is removed after those seven months, most likely during the winter when the shorter days also cull the mare’s estrous cycles. Then, once the days start to lengthen and the mare ovulates, insert a fresh implant for the next performance season.
Dr. Gradil says that any cycle the mare does have will be much more subdued and calm.
“The idea is to use this for five to seven months during the performance season,” he says. “In the winter, you can take it out and give the mare a rest. If later, you decide to put a new implant back in, you can. This product has an expiration date of one year.”
The implant has been sent to New Zealand, Australia, and Singapore for use on racing fillies where drug use, even synthetic hormones, is illegal. Hunter/Jumper trainers have started to use them as well as Arabian breeders and trainers.
“If a mare is going completely ‘wacko’ when she’s in estrus, using this implant can make a big change in her temperament,” Dr. Gradil says. 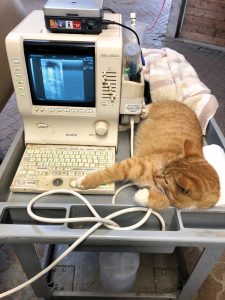 Dr. Gradil hopes to expand the abilities of his implant from not only temporary respite from ovulation, but perhaps in the battle against overpopulation of wild horses. One current study at the University of Massachusetts has seen the IUD, just a little bigger than the ones used for suppressing estrus, being used as more of a contraceptive.
“We have to use significantly larger IUDs for contraceptive, because the idea is to keep them in place for longevity,” he explains. “The stallion can be your enemy, because every time he attempts to breed a mare, he dilates the cervix, which puts more pressure where the implant is located.”
During the study, he inserted the implant in eight mares and turned them out with one stallion. The study is currently, as of press time, in its twelfth week, and the mares have not become pregnant.
Another study in Australia involves Brumbies, which are the Australian counterpart to America’s wild horses. Easy to dart on foot, Brumbies have been implanted with the contraceptive to study the length of effectiveness. “The idea is that once you insert the IUD, it can last the reproductive lifetime of a wild horse, which is up to 15 years,” Dr. Gradil says.
With these studies, he’s looking at ways to help keep the genetic pool of wild horses fresh, perhaps introducing the IUD into mares that already have one or two foals on the ground. He’s also looking at possibly coating the IUD with a material that can disintegrate or dematerialize with time, allowing the mare to become fertile again at a later time. 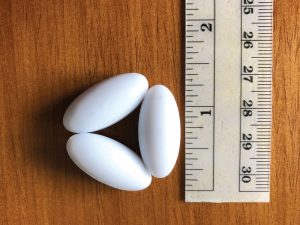 The insertion of the implant is mostly non-invasive for the mare. Dr. Gradil advises that prior to the use of any products, the mare should have an ultrasound to rule out any pregnancy or issues within the uterus that might affect her health, such as pyometra. “You cannot breach the cervix unless you know what is in the uterus,” he points out.
Once given the all clear, the insertion of the IUD can be done, with or without sedation. “It all depends on the horse,” Dr. Gradil says.
“You don’t want to manhandle or fight the mare,” he says. “It’s invasive, because you’re breaching the cervix. I don’t know how painful it is for a horse, but I know that, for women, dilating the cervix is painful. When we implant IUDs, we don’t see any discomfort, but I want to air on the good side of the horse and will give a little sedation.”

This drug and hormone free approach can potentially help not only to curb undesirable estrus behavior in performance mares, but also to potentially synchronize estrous cycles for embryo transfers. The researcher advises that the IUD is still at least a year out from being manufactured and made available to horse owners in the United States.