From Barn Aisles to Wedding Aisles 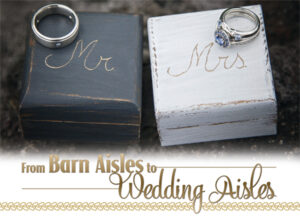 Alexis Solakian, Hillary Roberts and Morgan Ilic are used to stepping into some important arenas as each show year heads toward its close in the fall, but in Fall 2022, they stepped out of their saddles–if just for a day–to walk down the most important aisle of their lives. And this time, it wasn’t a barn aisle.

Congratulations to these newlyweds: Alexis and Austin Gooding, Hillary and Eric Timchak, and Morgan and Dustin Eickenhorst.

Though Alexis (Solakian) and Austin Gooding had many mutual friends over the years and despite the fact that Austin had Alexis’s first show gelding in training as a three-year-old, the two really didn’t meet until the 2016 APHA World Show. What began as a friendship became something more when Austin “bribed” Alexis into visiting him, promising her she could ride the well-known gelding Been There Scene It. The trip changed her life: she met two beings who would become lifelong loves–the gelding and, of course, Austin.

Austin and Alexis dated for three-and-a-half years before he proposed on a Maui beach during what was disguised as a family photo session for the Goodings and the Solakians. “I knew something was up when Garth (Gooding), Austin’s dad, pulled his phone out to start recording. I didn’t even know he knew how to use the camera on his phone!” Alexis laughs.

With 100 guests and their chocolate lab, Cody, in attendance, the couple wed on September 24, 2022, at Etre Farms in St. Joseph, Michigan. The pair felt blessed to have their closest friends and family share their special weekend, which included a barbeque rehearsal dinner that is perhaps better described as a “Beer Olympics.”