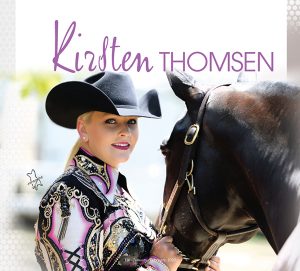 The reason a three-year-old Kirsten Thomsen developed an affinity for horses is still a mystery. According to her mother, Carol, her daughter’s desire to ride horses came out of nowhere. Although her mother showed horses when she was a child and into early adulthood, she was no longer riding or showing when her young daughter spontaneously asked to start riding.

“When I was three, I started bugging my mom to let me ride a horse,” Kirsten says. “One day, I just started liking horses. Who knows? Maybe it’s genetic,” Kirsten laughs. Although she had to wait until she was six for her first riding lesson, young Kirsten was hooked from her first ride. Her first trainer, BJ LeMaster, was Carol’s friend back when she showed horses and is known for having high expectations of her students. “She wanted to make sure we truly learned to ride. I had to earn my saddle back after my first lesson. I rode in a bareback pad for a whole year before I finally earned my saddle. She had a barn full of bomb-proof lesson horses and taught me so much and really helped me to develop a strong foundation,” Kirsten says. Another thing Kirsten had to earn was her first pair of boots. “I wanted boots, and my mom told me that I had to prove I was committed to riding before she bought me them, so I took my first lesson in white tennis shoes. After that, I borrowed some boots from BJ’s lesson barn. Then, after a month, I earned my first pair of boots.”

After a year of riding, Kirsten went to her first local schooling show. “I loved lessons, but showing was a whole new addiction,” she laughs. Eventually, Kirsten acquired her first horse, a mare named “Sandy” from a family friend and horse trainer, Judy Robinson. She had taken some lessons with Judy, and Sandy was the first horse she had ever loped upon. “She never really kept a consistent speed, and she didn’t really work out as a show horse, or a kid’s horse, for that matter. But, she did teach me a lot, and she made a really nice pasture pet.” When Kirsten was ready to move on to the next level, she was fortunate enough to cross paths with May Railsback and started riding with her in Chico, California. May had Sheza Ebony Lady, a 21-year-old seasoned show veteran, who was instrumental in showing Kirsten the ropes. She recalls, “One day, we were coming home from a lesson, and I told my mom that I had changed my mind and wanted to start running barrels. I was unaware that my mom had actually purchased Ebony and was planning to surprise me with the news at our next lesson. At that point, my mom told me that we were going to stick with all-around training for a year and see where it went.” The next week, when Kirsten took her lesson and learned about her new horse, the talk of barrel racing never came up again.