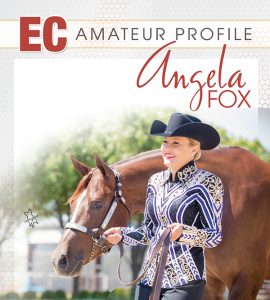 Angela Fox’s love of horses is inexplicable. Ever since she was a little girl, her yearning came on strong and has never wavered. Angela’s mother, Sheila, grew up in a horse family on the East Coast. Her family bred and raised racehorses and Reining horses, and Sheila showed as a child. When Angela was born, Sheila’s days of riding horses were behind her and all that remained were photos and prizes from her past.

“I loved looking at pictures of my mom from when she was showing,” Angela says. “To this day, I still have a cooler that she won in 1968 at a Reining show in New York.” When Angela was six, she began to beg to spend time around horses. “The University of Arizona had a farm in the center of Tucson, and it was close to our house. I always wanted to bring carrots to the horses,”she says.

Eventually, Angela noticed a riding stable on her way to school and asked her mother if she thought they had any horses there for her to ride. “I was persistent, and I think my mom realized early on that I wasn’t going to take no for an answer,” Angela laughs. Although her parents weren’t totally on board in the beginning, they finally enrolled Angela in riding lessons. Angela started as most beginners do; on a very broke, old lesson horse that rarely had the desire to go any faster than necessary. However, she quickly became bored with tame lesson horses and requested to ride the more challenging ones.

Angela’s father, Bob, purchased his daughter’s first horse, Maitlin Lady Fausta. She came with a saddleseat saddle and a full bridle for $2,000. “The parting words of the people who sold her to us were: ‘Be careful, she does-n’t like the wind.’ They failed to mention that she also ran like the wind and didn’t have a formal command to make her stop,” Angela laughs. Regardless of her quirks, she loved Fausta. “I had a satin jacket with her picture and name monogrammed on the back, and I wore it all the time,” she says. Although Fausta was by no means what anyone would consider to be a safe kid’s horse, Angela treasured her idiosyncrasies and credits Fausta with teaching her many skills that helped her become a better rider.