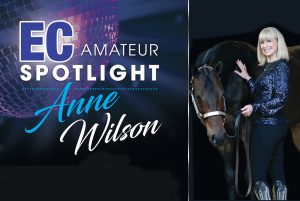 Anne Wilson’s parents were optimistic that a Radio Flyer rocking horse would be enough to satisfy their daughter’s horse-loving dreams. It was not. Despite living in the city with no place to keep a horse, Wilson’s persistence would eventually lead her family to purchase a gelding named Prince, whom she became the proud owner of in third grade. But her horse-owning trajectory was not smooth sailing from there. Just six months after Prince joined the family, Wilson learned a particularly tough life lesson not to test your parent’s patience, because Prince was sold.

But have no fear; fast-forward just a bit on life’s timeline and, in fifth grade, horse ownership would be a part of Wilson’s life once again when her parents leased a 16-year-old broodmare that was ready for a career change. As a young showman, Wilson competed locally at open and 4-H shows in and around Butler County, Ohio. Over the years, other horses did join the family, and Wilson’s sister even joined in on the horse show action. Wilson reminisces fondly on those years and all that she learned through her experiences as a newcomer to the horse world.

Like many competitors, Wilson drifted away from showing horses as she transitioned into adulthood, in order to build a successful career and family. But, as is usually the case, horse-crazed kids become horse-crazed adults. After a 20-year hiatus following her graduation from the University of Notre Dame and moving to Dallas, Wilson found herself once again getting the horse itch. After retiring from her work as a successful Certified Public Accountant, Wilson began volunteer work with the Junior League of Dallas where she was connected with Equest. Equest is the first therapeutic horsemanship center founded in Texas and is considered to be the industry leader in therapeutic riding to this day. After five years of loyal volunteerism, Anne signed up for their volunteer riding lessons.

Wilson discusses a trip she took to a local tack store for supplies needed for the lesson horses. “As I was checking out at the cash register, something caught my eye. I still say to this day that it was the most expensive $3.50 I ever spent. It was a horse magazine.” Thumbing through the thick pages of the journal, Wilson found herself stopping at the heading “Horse Country USA,” which referred to the Pilot Point and Aubrey areas of Texas. Wilson says she had no idea she was living so close to so many beautiful horse farms and ranches for her whole adult life. Convincing her husband to drive the 45 minutes to Pilot Point for a seemingly innocent motorcycle ride would be the drive that set Wilson back onto the path of horse ownership. The very next week she found herself traveling to Fort Worth to visit the Texas Classic Quarter Horse Show and it was there that she began talking to exhibitors and trainers and learning all that she could about the overwhelming world of horse showing.