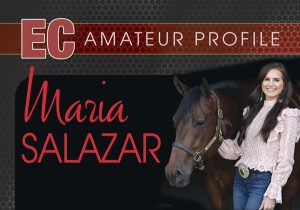 Coming off an impressive win at the 2020 AQHA World Show, Maria Salazar is gracious and humble when describing the route that took her to her second World Champion title in Amateur Hunt Seat Equitation on her talented gelding, Moonlightin, also known as “Harley.”

She is effusive with praise for her horse and her coaches, saying, “Harley is an amazing horse. For the entire World Show, he was always ready to go in the pen and do his job, which is all we can ask for. The finals didn’t start until midnight after the preliminaries ran until 3 AM the night before. It’s a lot to ask for a horse to compete at such a high level two nights in a row, when they normally should be sleeping, and he didn’t say no once.

“I couldn’t have done it without my trainer, Shannon McCulloch, and the rest of our team. When we won last year, my Mom couldn’t be there for my first World Championship, so it meant a lot she was here this year and proved she wasn’t bad luck. My Dad even watched the live stream. Luckily they announce us, or he would have no clue which ones we were.” The pair also won Level 2 Horsemanship and came in the Top Five in Level 3 Horsemanship, rounding out a very successful World Show.

While aboard Harley, Salazar tackled a technically challenging pattern in Amateur Hunt Seat Equitation to win with flawless precision. At any given show, as an all-around competitor, she has to memorize multiple patterns, a feat that anyone who has tried to remember something as simple as a phone number will admire. Salazar is the picture of cool in the saddle, but with her characteristic humor, she lets on that her appearance belies the monumental effort she puts into keeping her mind in the game and her show nerves at bay. She quips, “Well, there’s that nervous feeling we all have when we want to throw up before a big class, which I’ve done many times. But I’ve learned to mentally prepare for the big shows, so I don’t sabotage myself before we’ve even walked into the pen. I’ve worked really hard to deal with show nerves, and my Dad has been a great help with the mental aspect of competition, since he used to be a professional athlete. At a big event, like the World Show, when I know we’re going to have long days and competition can go late into the night, I try to pace myself. I get my practice rides in, always make sure Harley is comfortable and cared for, and then will go to the car or tack room to take naps during the day so I’m prepared for the classes at night. I also use visualization and affirmations to mentally prepare.”