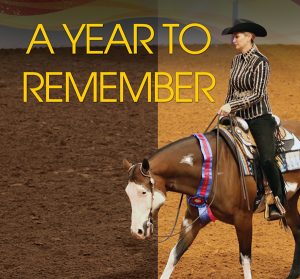 Sara began her winning streak at the World Show when she won Green and Junior Western Riding on Hez Blazin Trouble, more affectionately known as “Perfect Parker.” The double-registered, 4-year-old gelding, owned by Bonnie Sheren, was purchased earlier this year from Ali Eidson. Ali had shown Parker in 3-Year-Old Western Pleasure events in 2018, as well as Amateur all-around classes. He had proven to be an outstanding all-around horse, but his special talent for Western Riding was evident the first time Sara asked him to change leads. “After I finished judging the AQHA World Show last year, I came home and was excited to start working with Parker on some new events. He was mature and strong and seemed ready for a new job,” she explains. The first time Sara asked for a lead change, she realized that she had found Parker’s niche. A video of him going down the line, after just a few rides, went viral. “Within the first couple of weeks, he was going down the line changing leads, and he kept his body straight and his speed consistent. I’ve never put a green horse into the line that early in the training process, but he was just so natural and took to it so easily,” she says. This level of polish early on was something that even Sara had never seen with a horse new to the event. “It was like breathing to him. He’s just so natural. You barely have to do anything. He’s the type of horse a trainer dreams of.”

Sara showed Parker in his first Western Riding pattern just sixty days after his first lead change “That’s unheard of for me to show a horse that early on in the training process,” she says. Parker proved that he was up to the challenge when he earned points and a lot of recognition his first time out. Two weeks later, Sara showed Parker in the bridle for the first time, and that’s when things really started to click. They were the unanimous winners their second time out.