The much-awaited 2023 AQHA addition is welcomed with open arms 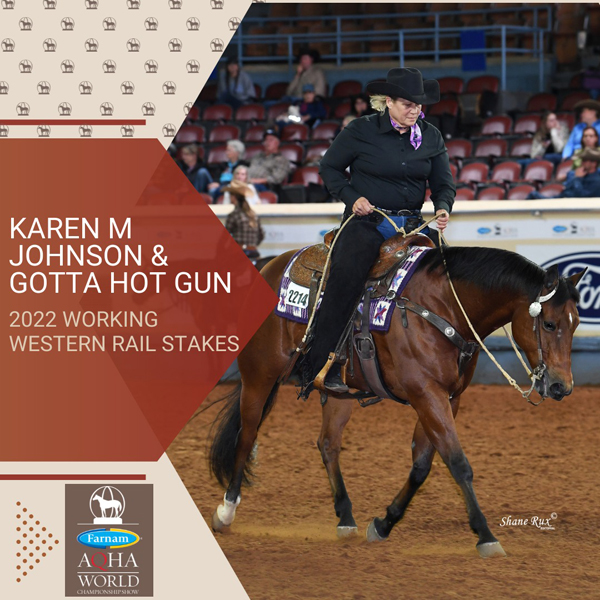 The Ranch division has been an ever growing phenomenon since its inception in 2012, first introduced as a sole class: AQHA Ranch Horse Pleasure, the brainchild of AQHA/APHA judge Don Clark. Though Clark intended it to be a rail class similar to Western Pleasure for horses that moved as if they worked for a living, it morphed into a pattern class.

“AQHA approved the class, at that time named “Ranch Horse Pleasure”, but it was approved as an individual-go, pattern class, although included in Category 5 along with the existing rail classes,” explains Ann Hards, AQHA exhibitor and Ranch enthusiast from Colorado.

The class was immediately popular, and Ann explains the numbers encouraged her to make a 700-mile trip to Las Cruces in March 2012 to finish a performance ROM on her well-broke, forward-moving horse, Lavish Love by HBF Iron Man. 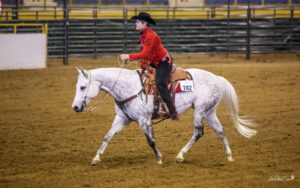 “My mare picked up 9 points the first time shown, easily finishing her performance ROM. I had a blast showing as had everybody else in the class. I was hooked. For the rest of 2012, my trainer and I attended every show offering Ranch Horse Pleasure within about a 1000-mile radius of Colorado, resulting in the first ever superior in Ranch Horse Pleasure horse and the 2012 and 2013 year-end Ranch Horse Pleasure Honor Roll titles,” she explains.

The Evolvement of the Rail Class

It’s no secret the division has exploded over the past decade as exhibitors like Hards, who were originally hauling for one class, clamored for more. Expansion of the discipline with classes like Ranch Trail, Ranch Conformation and much more over a decade helped to form an entire, booming division.

But the original rail class remained an elusive addition to the AQHA lineup.

However, many clubs and associations began to host “Ranch on the Rail” classes due to exhibitor request and sponsor support, and it became one of the most popular classes to watch at a show.

In fact, the entire atmosphere surrounding the Ranch division has become something to celebrate.

“One of the words I hear most consistently everywhere I go is the word ‘fun’,” says exhibitor Steve Headley of Headley Quarter Horses in Bloomington, Indiana.  “The horses look like they’re having fun, the riders are having fun, and people are cheering for each other,” explains Steve. “They have plain tack, and the judges can focus on the horse.” 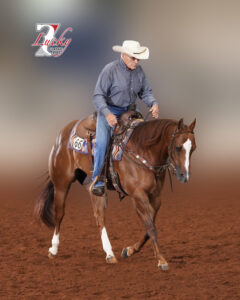 Steve acknowledges they have shiny Halter horses and can’t critique or deny the appeal of the pageantry of a fancy show horse, but they also know that growing up and showing in everything taught his family that “the good old American Quarter Horse is a versatile horse,” he reveals.

Steve explains that one of their star AQHA stallions, Rumerz, had been broke to ride when trainer Ross Roark had him.  “He was sorting cattle and 98 percent of me thought it was the coolest thing ever, and the other 2 percent was like, ‘please don’t let him step wrong,’” he laughs. “We’ve always been able to ride our Halter horses, and for us, it was the specialization that caused concern.”

In fact, their 2017 chestnut halter-bred mare Exquisite Rumerz by Rumerz not only boasts World Champion and Congress Open Halter titles, but she competes in Ranch Riding as well.

As the Ranch division focused more on the performance of the horse and less on that pageantry, the Ranch discipline, including Ranch Versatility, grew by leaps and bounds.

AQHA members continued to support the addition of “Ranch Rail Pleasure” or “Ranch on the Rail” classes in places like the 2017 NSBA World Show, and circuits such as Congress and Sun Circuit,  so members like Ann Hards, Michele Dare, Jim Dudley, Mike Jennings, Marty Simper and Steve Meadows, among many others, continued their cause to get the class approved for AQHA competition.

“The Ranch Committee had strong ideas about preserving their heritage, and I understand that – any time you move a class into the arena, it changes,” says Steve.

It was a change of the name that was pivotal and helped move the class to approval.  Michele Dare explains that the name of “Working Western Rail” was similar to the recently approved class of the Working Hunter Under Saddle. “This class name would not be as limiting as Ranch Rail but could be open to all western horses. The thought being it would make a great entry level class for horses to participate in before moving into the next level of competition, regardless of western discipline they pursued. All of this was written in the class proposal in an effort to show its value to the industry,” she says.

Michele and Ann engaged the help of Mike Jennings and Steve Meadows with the idea, and the newly proposed class was brought to the Show Committee by Michele and to the Ranch Committee by Ann. They also attended the 2019 World Show to collect almost 500 signatures in support of the class. Though COVID thwarted their plans to take those to convention, along with videos demonstrating the correct way to show a horse in the classes, the proposals were sent in December 2019 for the 2020 convention.

The Headley family was also so sure of the appeal of the rail class, they began to sponsor Working Western Rail stakes classes at the AQHA World Show and the All American Quarter Horse Congress in 2020. Between the impressive numbers and sponsor money aimed at the class, the class could no longer be ignored, explains Ann.

“Show participation has decreased and the Ranch classes are typically the largest classes at a show. The ranch exhibitor’s voice is thus strengthened,” she says.

Though it took three years for approval, the official AQHA class now finally emerged on the horizon for 2023.  The Headleys again sweetened the pot for two major shows in 2022, offering $10,000 to the owners of the open high-point horses competing at both the All American Quarter Horse Congress in Open Ranch Rail stakes and at the AQHA and Select World Show in the exhibition Western Working Rail classes, in addition to other cash prizes.

“At the Congress and the World this year, the stakes classes we sponsored had three splits – that’s how large it was,” reveals Steve. “It’s not only fun, but to us, those classes offer more opportunities to get points, ROMs, and Superiors, or to make an AQHA Champion.”

Now in 2023, Working Western Rail is officially an AQHA Class, the class Don Clark had requested in 2010, thanks to many diligent horsemen.  (See sidebar for complete definition from the 2023 AQHA Rulebook.)

The class purpose is to “reward 3-year-old or older American Quarter Horses that display the natural self-carriage of a working horse; a ground-covering, forward-moving stride without excessive speed; balance; cadence; and ease of use,” according to the AQHA rulebook.

Those who have always loved the image of a pretty horse loping down the rail now have yet another reason to become a fan of a rail class. “I’m excited about the Working Western Rail,” explains Steve.  “If it takes off like we think it will, it will allow us to maintain the historical versatility of the American Quarter Horse while still changing and evolving.”

To learn more about Working Western Rail, download the rulebook at AQHA.com.