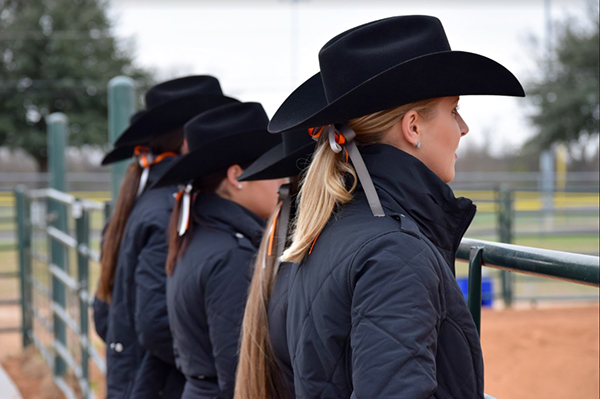 WACO, Texas – The No. 3 Oklahoma State equestrian team remained undefeated in Big 12 play for the first time in school history when it took down No. 7 Baylor, 14-6, on Saturday at the Willis Family Equestrian Center.

The Cowgirls (8-3, 4-0) jumped out to a quick 3-2 lead in Equitation Over Fences. Carly Barrick, Maggie Drysch and Katie Schell earned points for the Cowgirls with Barrick getting a high score of 83. It was Barrick’s eighth Fences win, which leads the Cowgirls in the Fences discipline.

The two teams moved to Reining where the No. 2 ranked OSU Reining team swept Baylor, 5-0. Danielle Cohen, Stephanie Helsen, Ebba Lange, Hannah Mitchell and Julia Purus all won their matchups. Helsen and Lange now lead the Reiners in wins with eight. Lange also won her third MOP honor of the season with her 70.5-70 victory against Georgia Smith.

The Cowgirls lost Horsemanship, 2-3. Harley Huff and Sarah Miller won the two points, and Huff earned her team-high eighth MOP honor. She beat Baylor’s Kaylee Mellott, 76.5-75.5, and it was also Huff’s ninth win, which is the most among the Horsemanship riders.

The meet concluded with Equitation on the Flat, and the Cowgirls took the event, 4-1. Abigail Brayman, Barrick, Hannah Janson and Katie Jones won their matchups to help seal the win.

They resume competition in two weeks when they travel to Springtown, Texas, for the Big 12 Championships.

MARTIN, Tenn. – The University of Tennessee at Martin equestrian team pieced together a 5-3 exhibition victory over Sweet Briar College in Hunt Seat action today at the Ned McWherter Agricultural Pavilion.

Ranked No. 8 in the latest National Collegiate Equestrian Association polls, the Skyhawks won or tied all five matchups in equitation on the flat. Quinn Reed snared MOP accolades with an 81-point performance while Abbie Hopkins (78 points) and Lindsay Anderson (75 points) also chalked up head-to-head victories. Monika Zoromski and Randi LaChance also tied their competitors with scores of 76 points and 71 points, respectively.

In equitation over fences, Hopkins earned a victory with a score of 80 points. Savannah Metheny also accounted for a win after a 78-point effort.

After completing the Western portion of its match against Minnesota-Crookston this afternoon, UT Martin completes its 2017-18 home schedule tomorrow with the Hunt Seat discipline against the visiting Golden Eagles at 10 a.m.

No. 8 UTM EQUESTRIAN ROLLS TO 19-0 VICTORY OVER MINNESOTA-CROOKSTON IN HOME FINALE

MARTIN, Tenn. – The No. 8 ranked University of Tennessee at Martin equestrian squad rounded out its home schedule with a dominant 19-0 victory over Minnesota-Crookston today at the Ned McWherter Agricultural Pavilion.

In horsemanship, Piddock accumulated 76 points for top honors in the event. Lucy Eier won a team point with a 72.5-point performance while Bailey Newlin and Devon Woods accounted for 72 points apiece. Jade Bleskey completed the sweep with a 71-point effort.

Anderson piled up 77 points on her way to MOP accolades in equitation on the flat. Abbie Hopkins also posted a team point with a 78-point effort while Randi LaChance and Zoromski each won their matchups with scores of 77 points and 74 points, respectively.

UT Martin wraps up the month of March at the United Equestrian Conference Championship, which takes place in Dallas, Texas on March 30-31.

MARTIN, Tenn. – Sweet Briar College came out victorious with an 8-2 win against Minnesota-Crookston on Friday. This is the program’s first win as an NCEA team.

Sweet Briar took a 3-2 lead in Equitation Over Fences with Courtney Barry, Makayla Benjamin, and Lily Peterson claiming points for the Vixens. The team continued to dominate in Equitation on the Flat completing a 5-0 sweep of the event. Lily Peterson, and Makayla Benjamin finished the day 2-0 as Emily Schlosberg, Katie Balding, and Aoifie Magner earned points to win the meet.