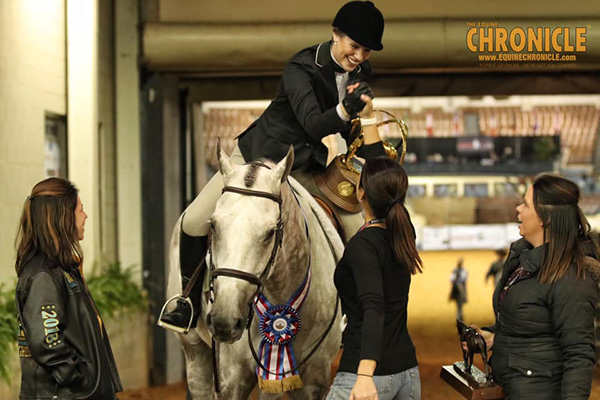 Two World Champions were crowned in rail classes this afternoon at the 2019 AQHA World Show. First, Haley Hartman rode Al Fool Ya to win to her first World Championship in Amateur Hunter Under Saddle.

Haley and “Remington” became a team when he was three years old and this is now his first year in the senior age division. They’ve had an exceptional month winning a Reserve title in Amateur Hunter Under Saddle at the Congress, in addition to a Senior Congress Championship with trainer, Dawn Baker. In addition, Dawn and Remi were named the Senior Hunter Under Saddle World Champions here at the show. 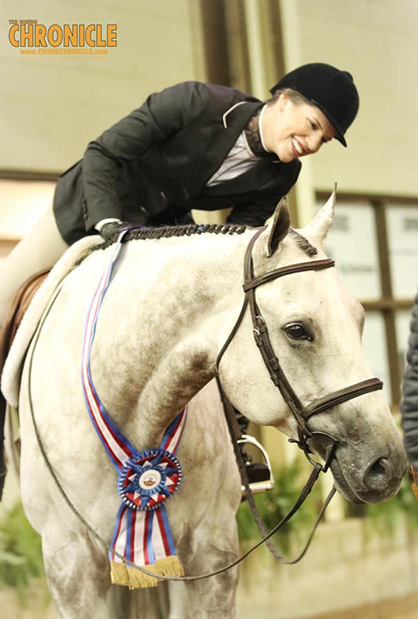 Haley remembers what she thought when she saw Remi for the first time. “He was down at Kristy Starnes’ place, and we flew down to go ride him. Dawn said if I wanted a Hunter Under Saddle horse, then I would love him. When we got down there, I saw he was the coolest color. He was actually almost a rose gray, and then I got on him, and he moves like no other. You can ride him all day. He’s so fun to ride.”

Haley has been riding on the AQHA show circuit since she was twelve years old and attended her first Youth World when she was a freshman in high school. During her last year in youth, the now 20-year-old placed third in Hunter Under Saddle, but that’s been her highest finish so far.

“It’s surreal. Even when I was out there, it didn’t seem real. I’ve always dreamed of this, so it’s a dream come true. It hasn’t sunk in yet, but I couldn’t be happier.”

“He really loves his job. You hit the show pen, and he takes it up a notch. He’s the laziest horse, so out here he could be acting super tired, but the second you get in the show pen, he knows.” 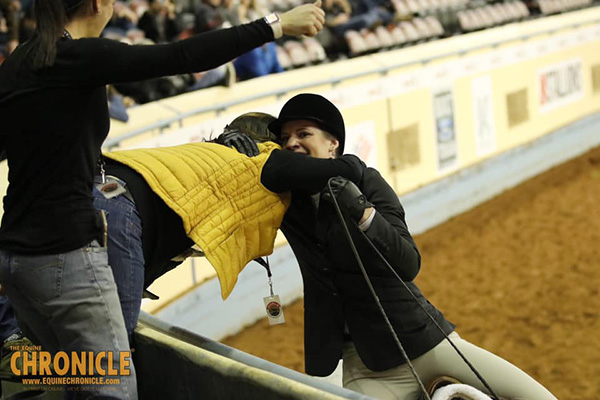 Reserve was Shelby Ratliff with Willy Has Potential. Third was Madison Nirenstein with Hubbout A Dance. Fourth was Erin Shapiro Boatwright with Me and My Assets. Fifth was Angela Fox with HP The Rusty Fox.

Kristen Galyean rode VS Lady In Red to win Amateur Western Pleasure. We spoke with Kristen just the other day when she and Lady were named the Champions in Level 2 Western Riding. Click here to read her interview. 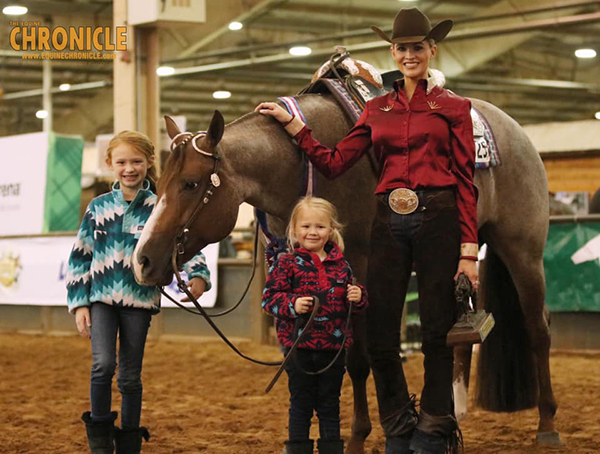 Reserve was Hillary Roberts with Johnnie On The Spot. Third was Sarah Nimigan with Best Brew At The Bar. Fourth was Taylor Searles with Hereicomagain. Fifth was Tanna Petersak with Hes Lazy No Doubt.