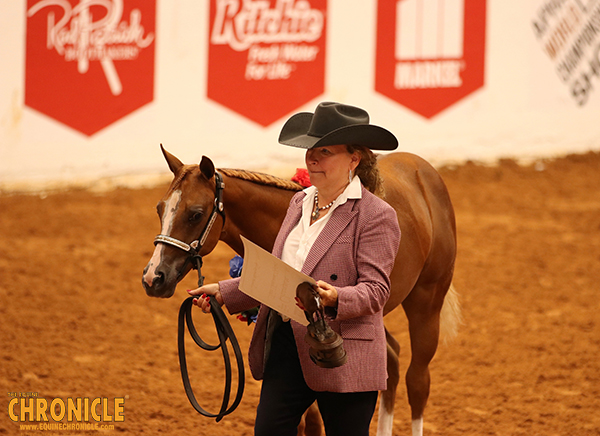 We spoke with Georgia about Effection when she won just the other day here at the show. Click here to read her interview.

Joy purchased her new filly by Very Cool, “Lorraine,” just last week from the Wallinger family at the Breeders Halter Futurity where she took home an amateur division win. “She’s really gorgeous, and very sweet to show. She’s very correct, pretty, and has a very kind eye. I think she has a lot of future. Some of those you see will be done after this weekend, but I think this one has a future.” 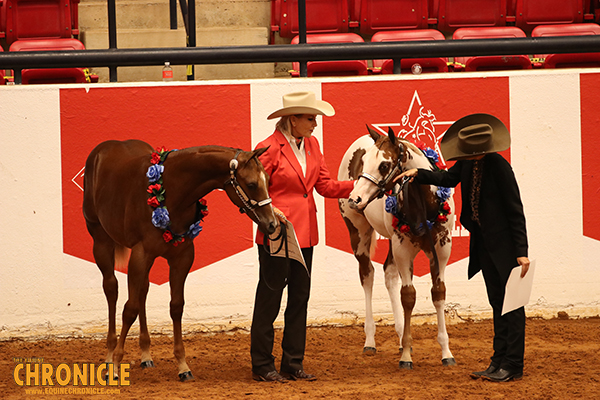 “She’s really good minded, so I wasn’t nervous showing her at all. She was great. She stood out there the whole time, and moved a few times, but she was fantastic to show. I love to show the babies. I think it’s more exciting and there is a little more fun to it.”

Because Joy won both the non pro and open division of the class, she was presented with $3,360 and $2,055, respectively. 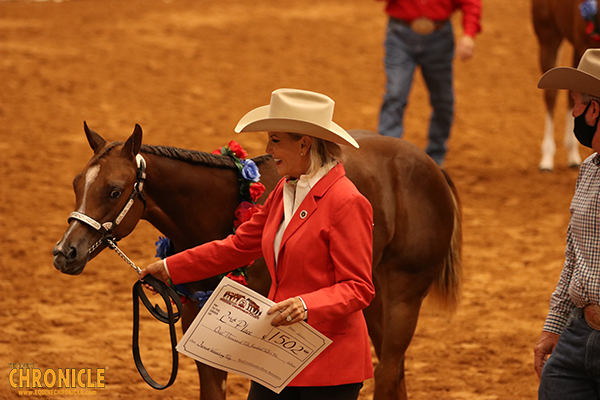 The winner of the Gold Junior Weanling Mares was Brian Ellsworth was Be So Unique. Reserve was Fred Tabor with Destiny Is All. Third was Elijah Paige with Gotta Lotta Exes. Fourth was Errin West with Kiddy Cool. Fifth was Stephanie Moss-Stahl with V Va Room.

In the WCHA Open Ranch Horse Versatility class, exhibitors put their fanciest ranch riders through their paces in a series of classes including Conformation, Ranch on the Rail, and a Ranch Riding pattern. The conclusion of the event was a fast-paced Ranch on the Rail exhibition that drew plenty of cheers from the crowd, as well as a quick change in the arena with plenty of crazy antics as arena teams attempted to clean and tack horses as quickly as possible. Stay tuned for a fun video of that coming soon… 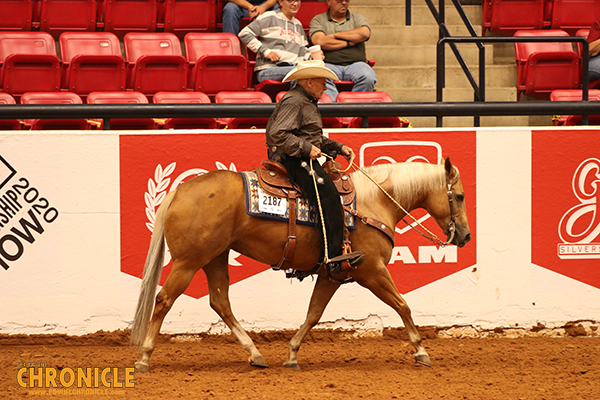 Bob Johnson was named the winner aboard A Busy Affair for Steve and Kathy Headley. This exceptional mare named “Lollipop” won at the Congress, AQHA World, and AQHA Honor Roll last year.

“I like the way she has some presence and charisma when she comes in the arena,” Karen Johnson says. “She has a forward, pretty trot and a lot of cadence, and that’s something they either have or don’t have. You can’t train that.”

Bob confirms that this mare’s attitude is also an essential component to their success. “Her ears are always up, and she looks like she’s having fun,” he says. “We had the same pattern at the World Show last year, and I almost thought I had a World Show go here. There are a lot of different patterns, but this one really fits her good. Having to guide and steer… she will go wherever you ask her to go.” 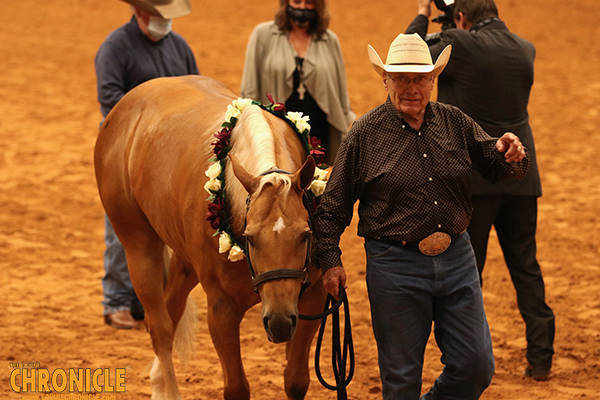 Ranch Riding horses are one of Karen and Bob’s specialities, and they work on certain components of the class every day. “We have cattle at home that we track them on, and we have jumps we set up. Also, we drag a log every day on every horse.”