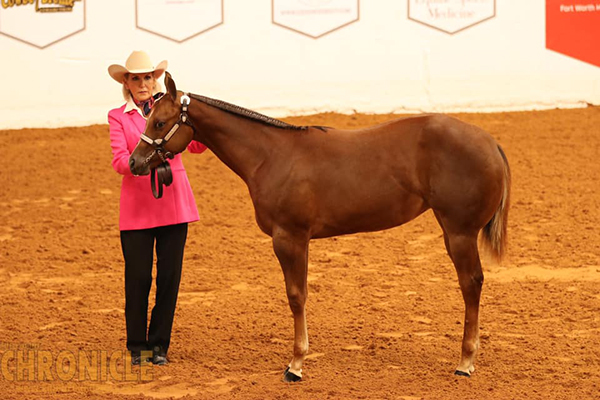 Today’s competition has been fast and furious at the 2020 APHA World Show crowning champions in two different arenas, simultaneously. First Georgia Snow led Effection to win the WCHA Big Money Non Pro Junior Weanling Fillies. Reserve was Kensy Maxwell with Incomparable. This was also the Color Champion in the class. Third was Joy Stehney with Very Scandalouz. Fourth was Amanda Wallinger with Trophy Gurl. Fifth was Chris Page with So Let’s Party. 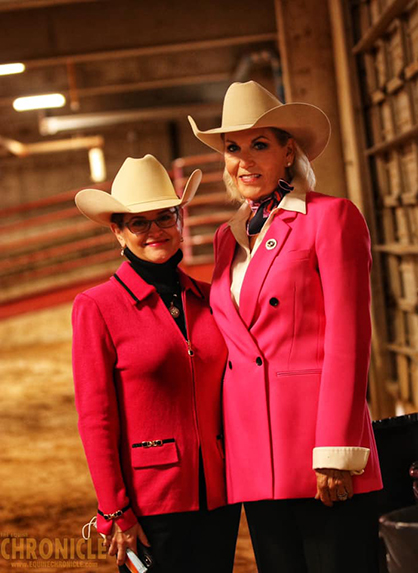 Jim and Georgia Snow raised this filly that’s by Nancy Dyer’s stallion, Ententions. “This morning, Jim said he’s going to change her name to Exquisite, because he says she looks exquisite! She was an embryo baby that we took, while on her recipient mare, right to Jimmie Hardin.”

“This was her first time out in the pen today, and she was a little nervous. In order to keep her calm, I pet on her and talk to her. She was good out there setting up for her first time.”

Georgia feels this filly’s overall balance and correct conformation helps to give her points in the eyes of the judges. “I’ve always liked that she’s so balanced. She has a beautiful hock and really pretty face. She’s kind of been a barn favorite ever since she was little.” 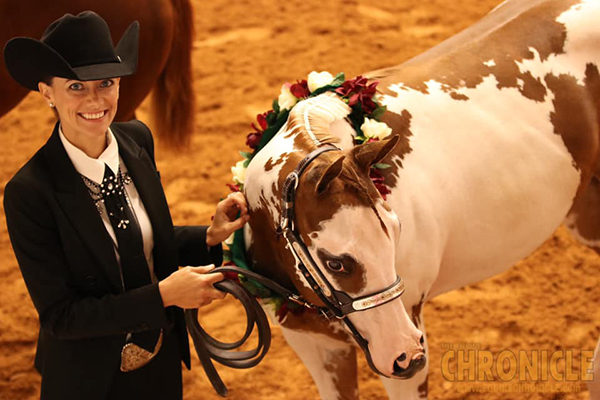 The Reserve Champion in the class was Kensy Maxwell with Incomparable, a filly by the Snows’ stallion, My Intention. “I told Kelsey that it’s kind of ironic, because when we had both of these fillies in the barn, they were stalled right next to each out, and they got turned out together. Today was a little reunion for them.”

Samantha Gardner rode her flashy, back gelding, EPR Face It I’m Fancy, to win Amateur Junior Hunter Under Saddle. Reserve was Nicole Salzer with Company Man. Third was Christi Christensen with Almost All Night. Fourth was Allie Littlefield with All Time Vandal. Fifth was Laura Bracken with Hoos Sophisticated.

Samantha has owned 5-year-old, “Chrome,” a gelding by All Time Fancy and out of Honeys Hot Jazz, since he was two. They currently compete under the guidance of Keith Miller.

“He’s a very cool horse, he loves his job, and he’s always happy,” she says. “He’s very expressive. This ring is a little hard, because it’s smaller, and he has such a big stride. He’s about 17 hands. He has a nice uphill canter. You can very easily ask him to move forward and cover ground or sit back on his hocks. I love it. I could canter him all day!” 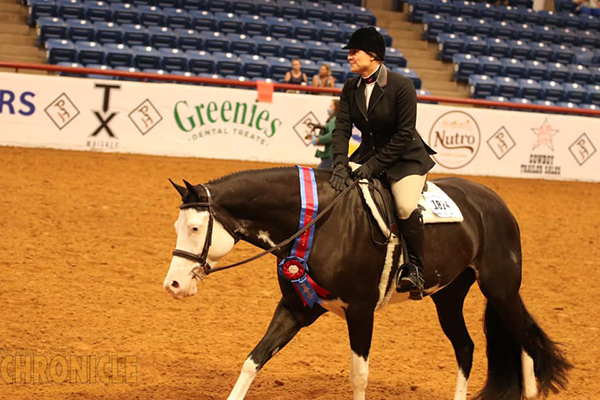 Interestingly enough, this was Chrome’s first win at the APHA World Show, although he has numerous titles at the Quarter Horse Congress and NSBA World Show. In order to prepare for today’s class, Samantha and Keith did some extra work on Chrome’s trot.

“The trot has been my hole for a long time. Because he’s built so uphill, which is a good thing, he stays up in his head and neck. It’s been my challenge, and he’s getting better by leaps and bounds.”

The winner of Novice Amateur Hunter Under Saddle was Ruth Scherer with The Dark Knight. Reserve was Kylee Miller with The Jerry Maguire. Third was Melissa Abel with Al Be On Time. Fourth was Jennifer Miller with Fabulous All The Time. Fifth was Stephanie Mohindra with Platinum Cowgirl. 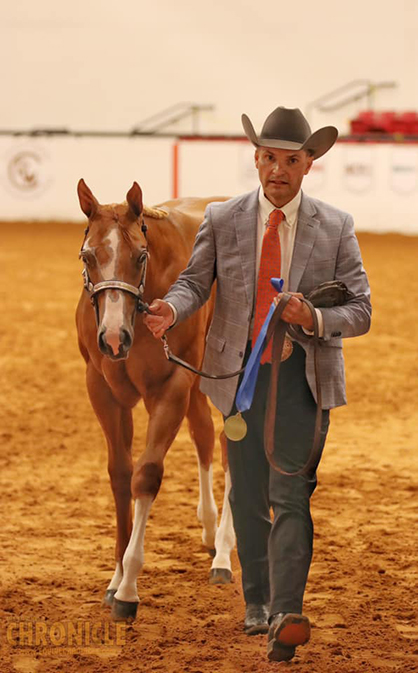 In Platinum Non Pro Weanling Mares, Anthony Bladen led Shes Maybelleen to a win. Reserve was Karry Voss with Sekret In Color. Third was Kayd Byers with Wishd You Were Here. Fourth was Cara McMillian-Gibson with Lavish. Fifth was Kensy Maxwell with Incomparable.

Anthony has owned this filly by Execute and out of a Telasecret mare for three months, Last week, at the Breeders Halter Futurity, she won $23,000. Today, she added to that impressive total with an additional $15,000!

“It’s amazing!” Anthony says. “It was a great class of fillies. She’s so balanced. She’s great across her topline, and she’s the sweetest filly.”

“Maybel” is a double registered filly, so you will be seeing her at the AQHA World Show this fall. She’s being fit by Al Schultz and Tom Robertson.

Christopher Strong rode All That Charisma to win Amateur Senior Hunter Under Saddle. Reserve was Christi Christensen with Suit N Tie Sensation. Third was Autumn Mack-Salyers with On The Scene. Fourth was Stephanie Mohindra with Even More Sensational. Fifth was Darcie Winiewicz with One Good Cowboy. 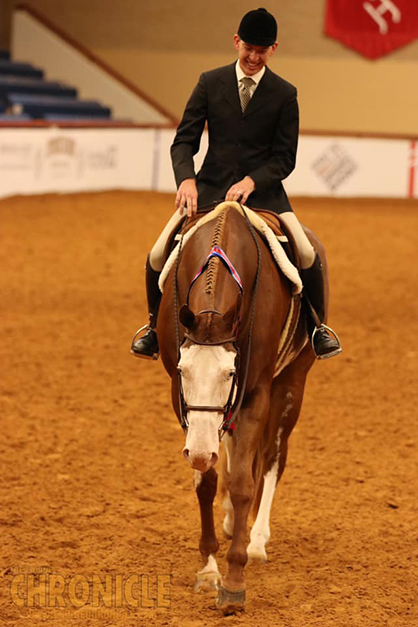 Christopher has been showing his 12-year-old gelding named “Huey,” for the past six years now. This is their first World Championship title, and Christopher is over the moon. Last night, Christopher’s mother rode Huey to win Amateur Walk Trot Hunter Under Saddle as well. Coming up later on in the show, Christopher will compete in Amateur Showmanship.

Although Huey is 17.3 hands tall, Christopher says he likes to be in your pocket. “He thinks he’s a tiny, little horse, and he wants to be your best friend. He loves treats and doesn’t think that he’s such a huge horse.”

“I think we were set up really well in the warm up pen today. It was a little scary, because it’s small and dark, and he gets a little claustrophobic. But once he gets in the pen and gets out into the limelight, he can show his stride and he’s great.”