Use of Tools by Horses 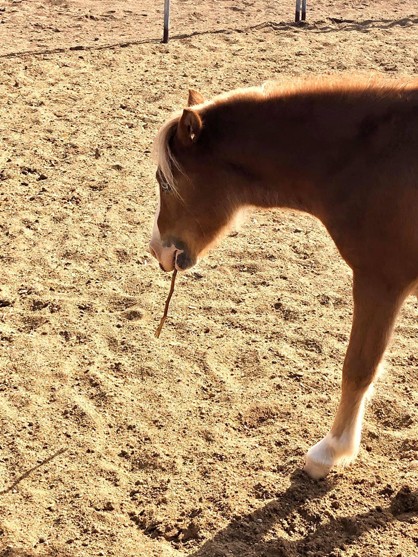 It used to be thought that using tools was one of the things that set us apart from the animal kingdom.

However, it is now known that some species use tools. Reports include chimps using sticks to reach food, sea otters using stones to break open shellfish and even elephants deactivating an electric fence by dropping rocks on it.

What about horses? Konstanze Krueger and co-workers conducted an investigation into “unusual” behaviour in horses.

The topic did not lend itself to conventional methods. Instead, they collected reports and video records of unusual behaviour using a dedicated website*. They also searched online for videos showing equids using tools.

Analysing 635 reports, including 1014 behaviours, they found 20 cases of tool use, 13 of which they termed “unambiguous,” in that it was clear that the behaviour was not trained, caused by reduced welfare, incidental or accidental.

Their findings are published in the journal Animals.

They then assessed the effect of management conditions on tool use and whether the animals used tools alone, or socially, involving other equids or humans.

They report that management restrictions were associated with tool use in 12 of the 13 cases – such as the use of sticks to scrape hay within reach when feed was restricted.

They conclude: “Equids therefore can develop tool use, especially when management conditions are restricted, but it is a rare occurrence.”

Tool Use in Horses.