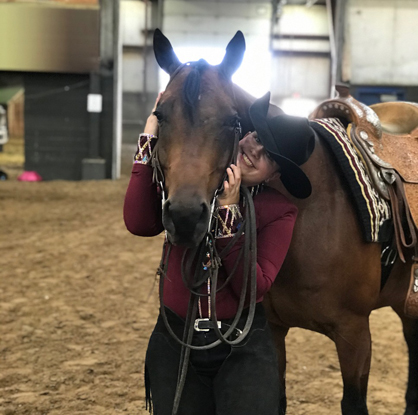 When Maggie Waslaski was diagnosed with mononucleosis causing inflammation to her spleen in early 2022, she was in danger of rupturing her spleen.  In fact, she was told by doctors that riding or even being near a horse would put her at serious risk because the danger was so high.

So Maggie was sidelined from showing her bay gelding, SH More Than Enuff, “Morey,” for the early part of 2022, even though she was aiming for the Level 1 West Championship Show in Scottsdale.  “This was a huge heartbreak for me because I had put so much time into practicing,” says the North Dakota 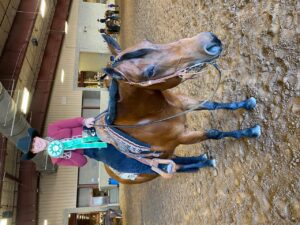 resident, who found herself unable to ride for many weeks.

Being stuck at home gave her a lot of time to reflect, she explains.  “Like my parents told me, illness is a mind game, too. I walked through my patterns mentally, watched footage, and kept my head up. You can’t discount how much effort you’ve already put in. Setbacks happen, and I had to do what I could to make the best of it.”

Then in May, doctors cleared her to ride in time for the Level 1 West Championship Show and Maggie was very thankful for the opportunity to join her barn, MonteRay Ranch and her trainers, the Montgomerys.  “This ended up being my first show of the year, plus the biggest show I’d ever attended, and Morey and I are both very novice to showing,” she says, noting the pair had just started showing AQHA in 2021.

But all would not be smooth sailing. When they first arrived at WestWorld, Morey had an allergic reaction to what they concluded was a scorpion bite.  Maggie explains, “He pulled through and we went on to show without trouble, but he gave us a scare!”

Maggie reveals Morey seemed to step it up once he was feeling himself again, sensing he had big shoes to fill. “I showed in Rookie and L1 Western events,” says Maggie. “I had clean, fun rides and I ended up with Two Top 10s and a Finalist placing.  All the sad tears shed during illness were made up for with a wonderful experience in Scottsdale.” 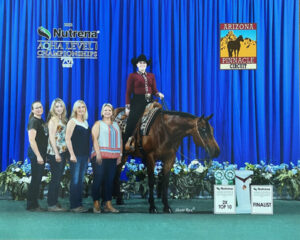 Of Morey, she says he was a horse who came into her life when she needed him most. “It took a while to figure each other out, but he has made me into a better rider and individual. He always lays down to sleep at shows and every morning, I have to sit crisscross in his stall so he can get some snuggles in.”

Her advice to others struggling with setbacks is simple: “You can never give up!”