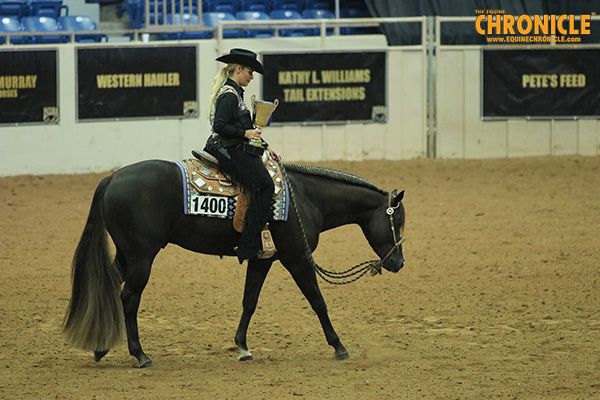 Today’s focus at the NSBA World Championship Show is on Western Pleasure, Hunter Under Saddle, Showmanship, and Trail.

First up, Sarah Nimigan rode Best Brew At The Bar to win 3-Year-Old Limited Non Pro Western Pleasure. The aptly named “Shock Top” was purchased by Nimigan in December, but their first show together wasn’t until early spring. He’s by The Best Martini and out of Prissy Legs. 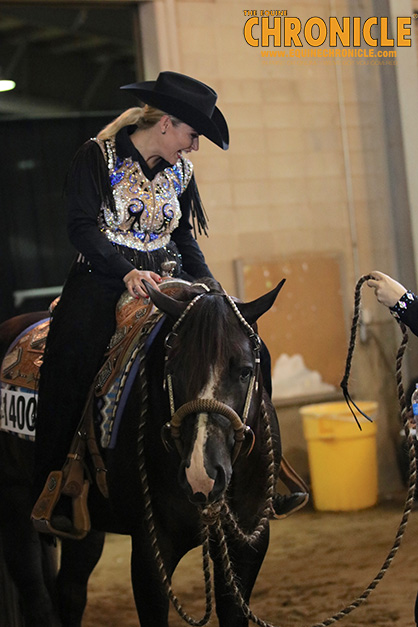 “The University of Florida has a really good mare named Prissy Legs. She’s the mother of UF A Certain Star, UF Rockin The House, and a bunch of other really good horses.”

“He’s so good-minded, beautiful, and he has so much self-carriage. He has all three gears. It’s easy. It’s what this class is supposed to be, I think. He’s so easy to be around and so pretty. He’s got a lot of size and a lot of substance.” 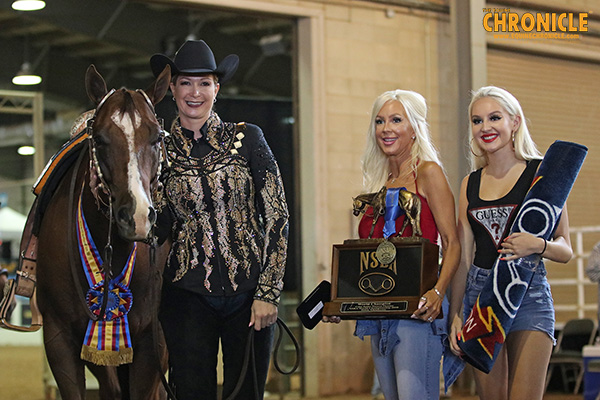 Sara Simons rode Stylist Chocolate to win Color Junior Western Pleasure. The Reserve Champion was Mike Hachtel with Impulsive Popstar. Third was Scott Weiss with Elicious. Fourth was Garth Gooding with Been There Scene It. Fifth was Mackenzie Fallis with She’s Sleepin Single.

Sara Simons was in the saddle of the 5-year-old Appaloosa/Buckskin named Stylist Chocolate for the Dryden family. “Douglas” is by Chocolatey and has been a part of the family for one year. Earlier this year, he won five trophies at the Appaloosa Nationals in Trail and Western Pleasure. “Sara just started Trail recently with him and won Green Trail and was Reserve in Junior Trail at the Nationals,” says Gaye Dryden. “Tomorrow, he will do the Color Green Trail here.” 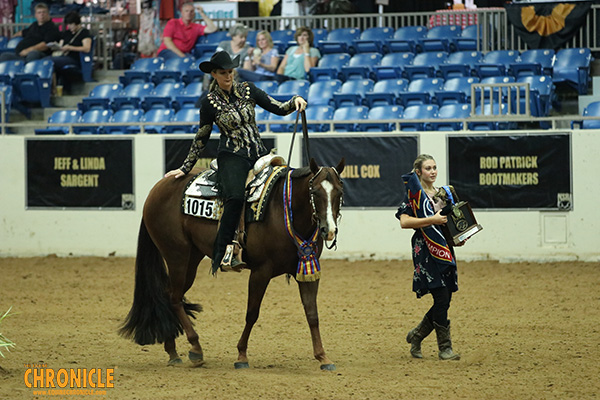 This was the Dryden family’s first trip to the NSBA World Show. They are especially excited about the inclusion of new color classes. “I think it’s awesome. It would be neat to get one or two of our other Appaloosas involved in bringing them here.”

Up next, Douglas will head to the Appaloosa World Show and possibly the Quarter Horse Congress. 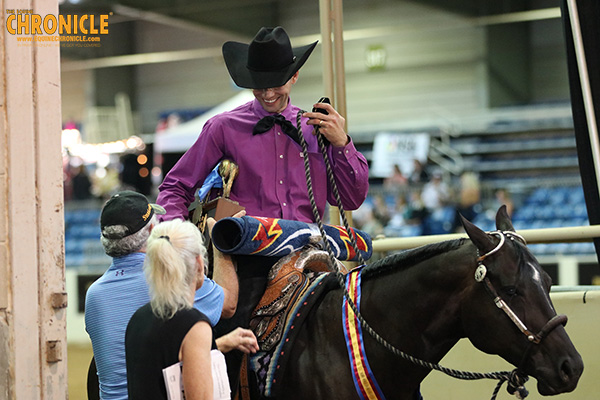 Aaron Moses was in the saddle of Moonrageous for Anneene Miller and Jim Gustafson of Starland Ranch, LLC. Anneene explains that “Spider” is a homebred gelding out of her black, Congress Masters Champion mare, Suddenly A Cool Lady, and by Only In The Moonlite.

“When he was born, he had this little bitty body, big head, and long legs, and he looked like a Spider. So, we started calling him The Spider. That’s how he got his barn name. I kept him home until he was two, and then he went to Aaron.”

Anneene showed Spider for the first time on Monday at the NSBA World and placed fifth.”It was the first time I’d showed him, and I’d never been in a bosal with him before. Honestly, I’ve never been on a horse that easy. He’s one of those rare horse that gets out there and does his job. I love his cadence, his rhythm, and how light he is on the ground. The biggest thing with him is that he’s consistent.”

Aaron and Spider have had quite a run so far this year being crowned the Co-Champion at the SOQHA Madness, winning at the Nebraska Cornhusker Classic, and winning at the Tom Powers. This is their second win at the NSBA World Show. Coming up next, he will head to the Congress.

“It’s hard to overlook him in the class; because, when you look at the rail, he’s the same every time, no matter what gait he’s in.” 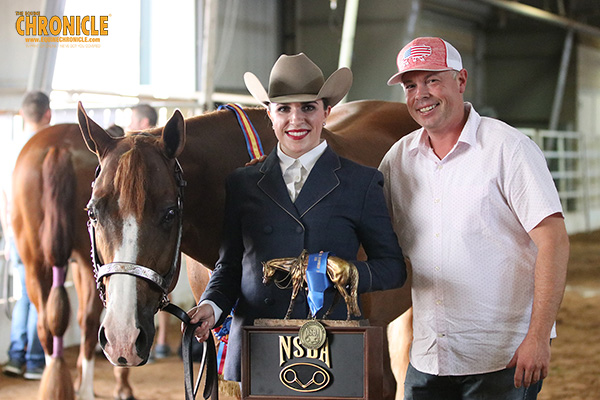 Kaylee Swanigan led Good As Expected to win Novice Amateur Showmanship. This is a new horse for Kaylee and, in true Swanigan/Stanhope family fashion, they share the 12-year-old gelding named “Jackson.” Coming up later today, Kaylee’s mother will show Jackson in Select Showmanship. “It’s worked out really well. We all get along with him,” she says.

Kaylee feels the best portions of her pattern were the trot and back sections. “In general, we run really well together. It’s pretty and it’s soft. Our back was pretty. He’s very handy at the back. He can go really fast and correct but still be soft, pretty, and elegant.”

Before she entered the pen to compete, Kaylee consulted with trainer, Clint Ainsworth, for some advice. “I’m very much a person who likes to feel my way through a pattern. We like to practice to get that feel; but, we don’t get too exact about everything. For me, if I was like that, and something went wrong, I think I would go a little crazy. We practice all our pieces and make sure we feel good about it, but we try not to overdo anything.”

“Ever since I was a little girl, I’ve always loved Showmanship and I wanted to do really well in it, so it’s been exciting.”