The Celebration Continues Growth With a Winning Hand in Vegas 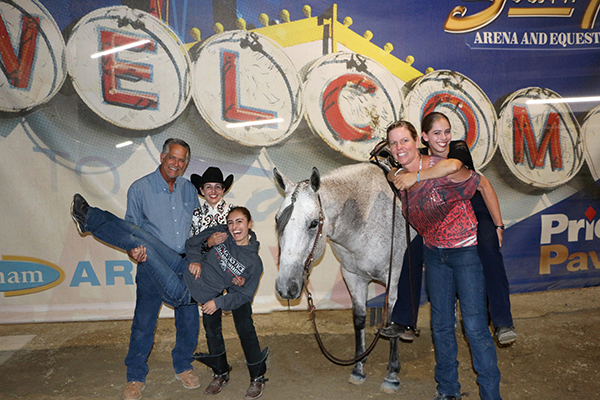 Las Vegas set records with sizzling heat, yet in the cool comfort of South Point Hotel and Equestrian Center, records of a different sort were being broken at The Celebration and EMO Western States Championship shows July 1-11. After having to cancel the event in 2020, exhibitors came roaring back and class entries saw their highest numbers to date. Personal goals were exceeded, cash was awarded and it was abundantly apparent that everyone was having a blast.

The 2021 EMO Western States Championship was a huge success with over $14,000 awarded in prize money, along with gold, silver and bronze trophies, plus spectacular championship ribbons to tenth place. This annual event is held in conjunction with The Celebration. Due to COVID and the desire to expand participation, the usual qualifying rules were waved for 2021. 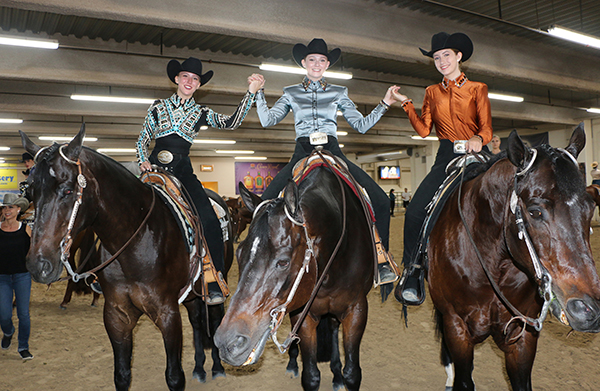 EMO Championship classes saw 285 entries across rail, trail, pattern, cow horse, reining and barrels. At the conclusion of each class, placings and recognition are given inside the arena, making it a truly special moment for every exhibitor. The Western States Affiliates are continuously grateful to Chris Hocutt and the EMO Agency, inc. for their title sponsorship of this premier event. Chris was also on hand throughout the event to help organize, award prizes, and cheer on exhibitors.

Exhibitors in the two circuits were also well rewarded for their accomplishments in the ring. Awards included beautiful silver trimmed head stalls from Kathy’s Show Equipment for Best of Show and spur straps for reserve. Handsome trophy cups awaited Circuit Award winners and buckles were awarded to Circuit Champions in the Walk/Trot 11 and Under division. Select circuit award winners found an extra surprise in their trophy cups: a bottle of wine donated by sponsor Cheval Winery. Exhibitors also had other ways to win. Gift certificates, some valued at $500, were part of the daily giveaway drawings. Happy exhibitors picked up certificates from Sami Fine Jewelry, Horse Show Closet, Show Me Again, D Designs, Corro, Triple Crown, Smart Pak, and Hayes Hats. At the conclusion of the show, a drawing was held for $2,500 in total Grand Prize daily money sponsored by Kent Ray Taylor. Lila Seider won the 1st place prize drawing for $1,000. 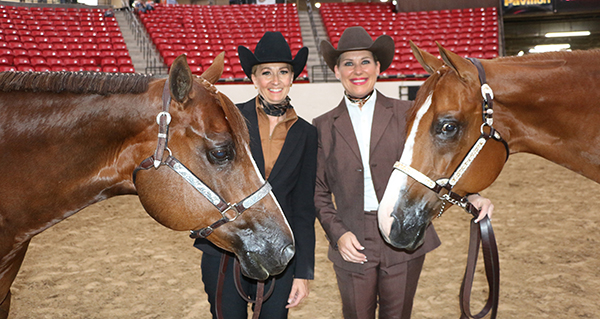 “Bob and I love South Point, and The Celebration is always such a great show,” says double EMO Champion Dana Avila. “The best part about it is being able to ride in the air conditioning for a while in the middle of summer,” she adds with a laugh. “Nobody skips a chance to go to South Point for a horse show. That’s for sure. It’s such an amazing facility. We’re so lucky to have it here in the west. Beyond all the great facilities, the place is spotless. They’re constantly cleaning everything. There’s even somebody cleaning the wash racks! No horse show we go to does that. It all makes for a really nice experience.”

Dana was busy during the entire show and took home a number of awards for her efforts in classes including Reining and Horsemanship. She shares, “I’m dipping my toe in a whole ‘nother venue.” It may have been a surprise for many to see this accomplished Reiner and Ranch Rider decked out in a fitted Horsemanship shirt. However, Horsemanship isn’t an entirely new discipline for Dana. She  showed Arabians in Stock Seat Equitation as a youth. She bought Magnificent Dreamer, aka “Reggie,” about a year ago and recognized immediately that her new Reiner would make a great Horsemanship project. She turned to trainer, Leslie Lange, to guide her in this new direction. After a lot of hard work and overcoming some challenges, all the pieces came together in Vegas. Reggie and Dana started the show strong and picked up an EMO championship in Select Reining. 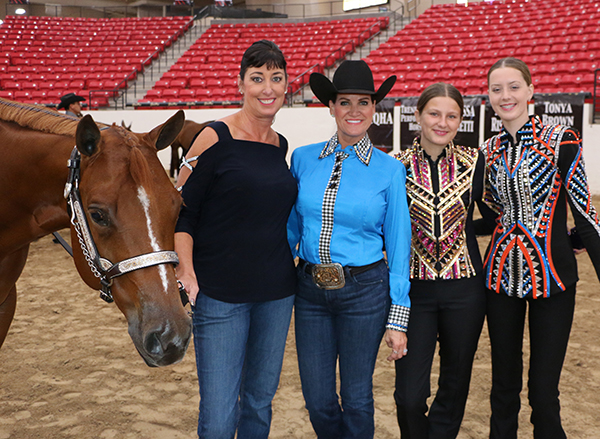 A few days later, the pair took top honors in a very deep field in the EMO Championship Select Horsemanship. Her cumulative points also earned her a Reserve Circuit Award in Amateur Ranch Rail and a Circuit Champion award in Select Reining. “I was there for 12 days, which is a long time. But it was so much fun,” Dana says.

Lindsay Gunderlock Smalz was very pleased with her experience in Vegas as well. “It was nice to work hard all those months and be rewarded for it.” Lindsay had won Trail at the Youth World twice in the 90s, but put aside showing for many years. “I’ve always loved it and had a passion for it. A couple years ago, when my kids were older, I was ready to start showing again.” Lindsay’s aunt, trainer Judy Bonham, was instrumental in helping her get back in the ring. Lindsay’s family has been hugely supportive of her goals and the time it has taken to get back in top form. “My mom and aunt always help with my kids, and Judy is always giving me great pointers,” she shares. “My husband is my biggest cheerleader. He’s always encouraging me.” Lindsay got her current horse, Lopin All Night Long, in November, and the pair have made a good team in a short time. The Celebration was the perfect venue for them to shine.

“Watching Charlie Cole show my horse and do so well was such a highlight of the week,” she continues. “It’s a dream come true to be back in training with Charlie and Jason. They were my trainers my first year as an amateur with my English horse in 1998. It was a thrill to get second in EMO Championship Horsemanship and win the circuit award in the Amateur Horsemanship. Then, Charlie won the circuit in Junior Trail also.”

Next, Lindsay has her sights set on the NSBA World Show, Congress, and the AQHA World Show. “I want to keep going and enjoy it with my family. It’s such a great thing to do. I love spending time at the shows with my kids, my mom, my aunt, and the whole horse show community. It’s fun.” 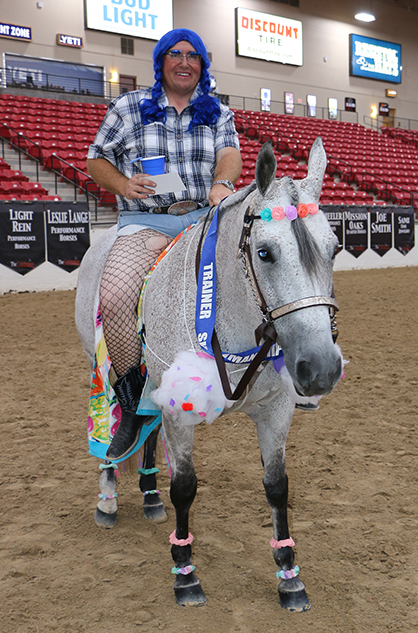 That was a common theme among exhibitors; they want to show where it’s fun. The Celebration and the South Point venue host a very family friendly and welcoming environment making it a destination show for everyone. Organizers work hard to meet the exhibitors’ needs and simultaneously provide a fun atmosphere. The Celebration hits high marks from scheduling, to class offerings, to plenty of recognition. There is a great deal of camaraderie in the stall blocks and warm up arenas.

Another event highlight was the Trainer’s Showmanship class. Eight trainers, and special guest star, Darren Moore, changed things up a bit when they dressed in costume and took a hold of the lead to present their horses. The teams were previewed in a calcutta to raise money for the Pacific Coast Quarter Horse Youth Association netting over $8,000. An exuberant crowd was on hand for the fun. Karen Graham and David Busick were tapped to be the judges and certainly had their work cut out for them. Showmanship took on a whole new meaning with Ryan Kail wearing fishnet stockings and Daisy Duke shorts, while Darren sported a dazzling jacket over “her” buxom frame. The antics of Lil Bo Peep, Shrek and Donkey, Joe Exotic, and an odd pink gorilla also had the crowd in stitches. Somehow, Little Tommy Forehand and Justin Wheeler impressed the judges to win the blue sash of champions.

For all the fun, there was plenty of serious and well-matched competition in the arenas. Nine All Around awards were presented. Hailey Brown and her horse, Call Me Interested, had a great week in the 11 & Under division winning the All Around trophy while Suddens Best Asset and Trinity Eserjose accumulated the most points to claim the All Around L1 Youth. The Youth Best of Show title went to Sydney Ann Swallom riding Almost Invited. 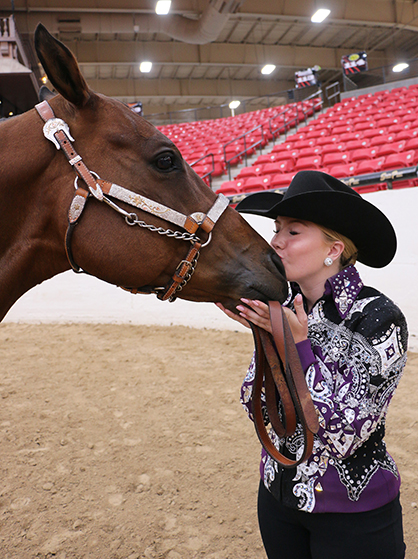 Level 1 Amateurs had a lot of competition in robust classes. At the end of the show it was Kristi Pavola Perea riding Cprealsureshestheone to win the silver headstall. Snapchat Diva and Roxanne Doogan were called high on the judges placings throughout the week, and it was enough to earn the Best of Show for the Amateur Select title. Kendra Whitney piloted Rumors Inthe Dark with poise and consistency across all the classes to win the Amateur Best of Show. Hez Blazin Trouble accumulated the points for owner, Bonnie Sheren, to earn the Best of Show in Open.

In the Youth Reining, Ranch and Cattle, it was Quinn Eisenfeld who put together a series of high marks aboard Xtra Chuka Chic to win the Best of Show.

All the award winners and score sheets can be found at thecelebrationlasvegas.com. It was a fun show at a fantastic venue with great prizes and giveaways that gave exhibitors plenty to celebrate. It’s no surprise that this show continues to gain popularity. Dates for the 2022 show are June 30 – July 10, 2022.

All Around L1 Youth