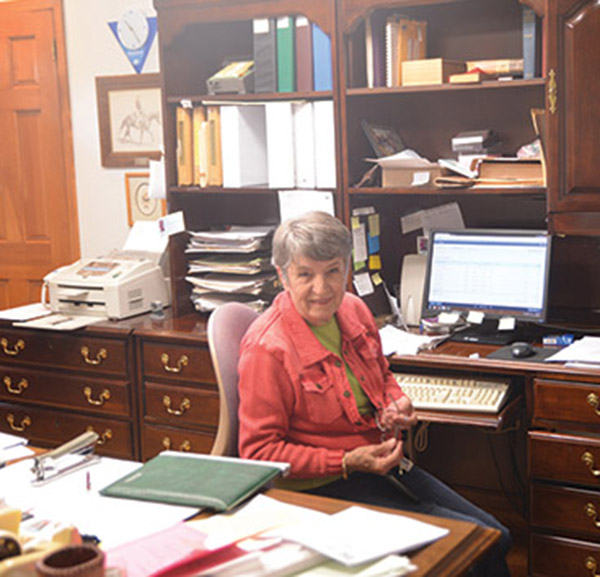 The National Snaffle Bit Association is saddened to report the passing of Mabeline Harris, the matriarch of Harris Leather and Silverworks, in State Road, North Carolina.

Harris Leather and Silverworks might have never happened if it hadn’t been for Mabeline’s ‘little side business.’ She began hand-tooling leather belts and purses in the 1960’s. Locals will recall the Harris’ red and white two-horse trailer was frequently seen at horse shows around North Carolina, where Mabeline used the trailer’s tack room to display her wares.

Mabeline’s little side business kept her and husband Ralph busy working long hours at their kitchen table in Mt. Airy, until they moved to the current location of the business outside State Road in 1979. When sons Phil and Eddie began competing with their own horses, Ralph soon found himself creating headstalls with a bit of silver on them, and Ralph Harris Leather, Inc. was born.

By 1978, Ralph and Mabelene had hand-tooled and dyed leather show halter orders coming in too, and the couple established an assembly line with Mabeline doing the tooling and Ralph providing the silver. Ralph quit his job at the telephone company the same year to jump full time into the family business.

Nothing made Mabeline more proud than to see her family’s involvement in the business. Over the years, Mabeline and Ralph’s sons added their contributions to the business. Phil began to use his mechanical mind to take saddles apart and put them back together, and made his first saddle in 1982, spawning the saddle making portion of the business. Phil’s wife Phyllis worked in the medical field before coming to work in the shop, where she became an invaluable part of the team.

Mabeline and Ralph’s son Eddie then added a second layer of artistry to the business with his mastery of silverwork, while his supportive wife Robbin teaches the next generation of students at Elkins Elementary School.

Today, you’ll also find the third generation of the Harris family working each day in the shop. Phil’s sons Stanton and Preston working in IT and saddle making, respectively, while Eddie’s daughter Mary Gwyn designs spurs and is often the voice customers hear when they call the shop.

NSBA extends its deepest sympathy to the entire Harris family.