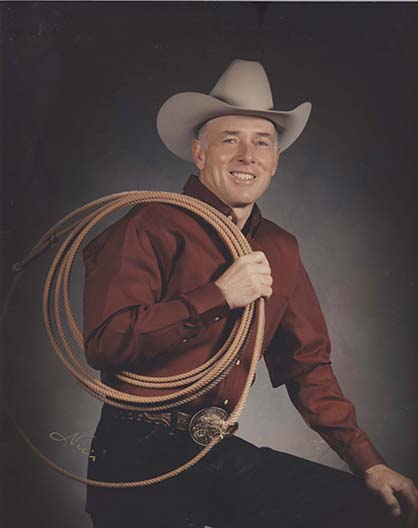 “Billy was an outstanding horseman in the true nature of the word,” declared noted trainer and AQHA judge Al Dunning. “He competed to the highest level in many events and was an icon in AQHA. Billy was a gentleman, a great family man and a real cowboy.”

As a cowboy who made his name in the saddle, Billy lets results speak for themselves.

Born December 8, 1935, Billy Gene Allen was raised on a ranch and farm near Clayton, New Mexico, where his family had horses for working cattle and other chores, rather than for competing in horse shows. He grew up dreaming of being a world champion roper and rodeoed until he realized that rodeo was a short-lived profession. In his mid-20s, Billy switched to training horses.

Billy and his family moved to Kansas in 1965, where they built Sunny Slope Horse Farm at Scott City. It’s where Billy made some very nice horses, including world champion senior working cow horse The Hifalutin Dude, and world champion junior heeling horses Zippin Zanita and Zan Gold Jack, the latter whom he also developed into an AQHA Champion. It’s where Billy first designed and created the Billy Allen western curb bit, and it’s also where in 1979 he founded Billy Allen Products, which distributes Billy Allen Horse Feed to customers in Kansas, Nebraska, Colorado, Oklahoma, New Mexico and Texas. He was a past president of the Kansas Quarter Horse Association and was inducted into the KQHA Hall of Fame in 2005.

Married for more than 60 years, Billy and wife Connie have daughters Jennifer and Brenda, and sons Doug and Jeff. Each of the four won youth world championships in roping and the boys followed their father into the industry, where they both are well-known trainers and judges. But it wasn’t just his own kids that drew Billy’s attention. In addition to training, showing and judging horses, Billy and fellow Hall of Fame horseman Floyd “Sunny Jim” Orr  spent countless hours conducting clinics all over the country, teaching horses and horsemanship to young horsemen and horsewomen. To Billy Allen, that was just the way you did things.