Silver Dollar Circuit- The Daily Stride- Studs are in Fashion 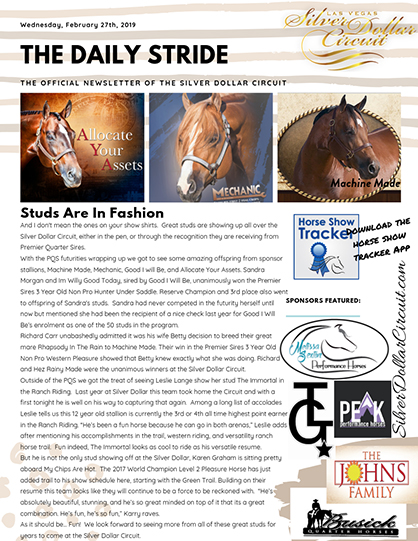 Studs are in fashion, and I don’t mean the ones on your show shirt. Great studs are showing up all over at the Silver Dollar Circuit, either in the pen, or through the recognition they are receiving from Premier Quarter Sires classes here at the show.

With the PQS futurities wrapping up, we got to see some amazing offspring from sponsor stallions, Machine Made, Mechanic, Good I Will Be, and Allocate your Assets. Sandra Morgan and I’m Willy Good Today, sired by Good I Will Be, unanimously won the PQS 3-Year-Old Non Pro Hunter Under Saddle. The Reserve Champion title and third place also went to offspring of Sandra’s studs. Sandra had never competed in the futurity herself, until now, but mentioned she had been the recipient of a nice check last year from Good I Will Be, due to his enrollment as one of the 50 studs in the program.

Richard Carr unabashedly admits that it was the decision of his wife, Betty, to breed their great mare, Rhapsody In The Rain, to Machine Made. A win in the PQS 3-Year-Old Non Pro Western Pleasure showed that Betty knew exactly what she was doing. Richard and Hez Rainy Made were the unanimous winners at the Silver Dollar Circuit.

Outside of the PQS, we got the treat of seeing Leslie Lange show her stud, The Immortal, in Ranch Riding. Last year, at the Silver Dollar, this team took home the circuit championship and, with a first tonight, he is well on his way to capturing that title again. Among a long list of accolades, Leslie tells us that this 12-year-old stallion is currently 3rd or 4th on the list of the All Time Highest Point Earners in Ranch Riding. “He been a fun horse, because he can go in both arenas,” Leslie adds after mentioning his accomplishments in Trail, Western Riding, and Versatility Ranch Horse Trail. Fun indeed, The Immortal looks as cool to ride as his versatile resume.

But he’s not the only stud showing off at the Silver Dollar. Karen Graham is sitting pretty aboard My Chips Are Hot. The 2017 AQHA World Show Level 2 Western Pleasure Champion has just added Trail to his show schedule here, starting with Green Trail. Building on their resume, this team looks like they will continue to be a force to be reckoned with. “He’s absolutely beautiful, stunning, and he’s so great minded on top of it that it’s a great combination. He’s fun. He’s so fun,” Karen raves.

As it should be… fun! We look forward to seeing more from all these great studs for years to come at the Silver Dollar Circuit.