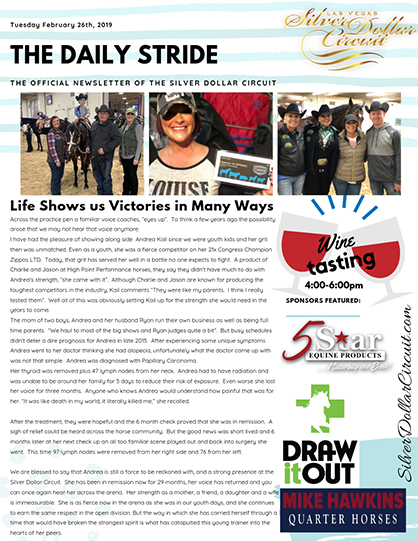 Across the practice pen, a familiar voice coaches, “Eyes up!” To think, just a few years ago, the possibility arose that we might not hear that voice anymore.

I have had the pleasure of showing alongside Andrea Kail since we were youth kids, and her grit then was unmatched. Even as a youth, she was a fierce competitor on her 21 time Congress Champion, Zippos LTD. Today, that grit has served her well in a battle no one expects to fight.

A product of Charlie Cole and Jason Martin at Highpoint Performance Horses, they say they didn’t have much to do with Andrea’s strength, saying, “She came with it.” Although Charlie and Jason are known for producing the toughest competitors in the industry, Kail comments, “They were like my parents. I think I really tested them.” Well, all of this was obviously setting Kail up for the strength she would need in the years to come.

The mother of two boys, Andrea, and her husband, Ryan, run their own business as well as being full time parents. “We haul to most of the big shows, and Ryan judges quite a bit.” But busy schedules didn’t deter a dire prognosis for Andrea in late 2015. After experiencing some unique symptoms, Andrea went to her doctor thinking she had Alopecia. Unfortunately, what the doctor came up with wasn’t that simple. Andrea was diagnosed with Papillary Carcinoma.

Her thyroid was removed plus 47 lymph nodes in her neck. Andrea had radiation and was unable to be around her family for five days to reduce their risk of exposure. Even worst, she lost her voice for three months. Anyone who knows Andrea would understand how painful that was for her. “It was like death in my world; it literally killed me,” she says.

After the treatment, they were hopeful, and the six month check proved that she was in remission. A sigh of relief could be heard across the horse community. But, the good news was short lived, and, six months later, at her next check up, an all too familiar scene played out, and back into surgery she went. This time, 97 lymph nodes were removed from her right side and 76 from her left.

We’re blessed to say that Andrea is still a force to be reckoned with, and a strong presence at the Silver Dollar Circuit. She has been in remission now for 29 months. Her voice has returned, and you can see her again across the arena. Her strength as a mentor, a friend, a daughter, and a wife is immeasurable. She is as fierce now in the arena as she was in our youth days, and she continues to earn the same respect in the open division. But the way in which she has carried herself through a time that would have broken the strongest spirit is what has catapulted this young trainer into the hearts of her peers.