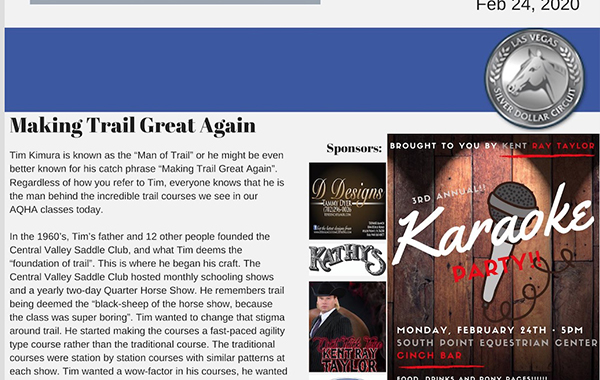 Tim Kimura is known as the “Man Of Trail” or he might even be better known for his catch phrase, “Making Trail Great Again.” Regardless of how you refer to Tim, everyone knows that he is the man behind the incredible Trail courses that we see in AQHA classes today.

In the 1960s, Tim’s father and 12 other people founded the Central Valley Saddle Club and what Tim deems the “foundation of Trail.” This is where he began his craft. The Central Valley Saddle Club hosted monthly schooling shows and a yearly two-day Quarter Horse Show. He remembers that Trail was deemed the “black sheep of the horse show, because the class was super boring.” Tim wanted to change that stigma around Trail. He started making courses into fast-paced agility type courses rather than a traditional course. The traditional courses were station by station courses with similar patterns at each show. Tim wanted a WOW factor in his horses, and he wanted to step away from the generic Trail obstacles. He started designing courses up and down California while showing his Reiners and Cow Horses. He remembers being not very well-liked when he first began designing courses further east. No one had ridden a Trail course quite like his.

In 1996, Tim was approached by AQHA to create a Trail course for them. Tim has now worked for AQHA for 24 years and one of the first courses he built was the World Show course. He creates his courses to challenge exhibitors. He wants the exhibitor to ride one obstacles, one pole, one gap at a time. In his clients, he encourages riders to “ride until you make a mistake, as there is no such thing as a perfect trail pattern.” To Tim, “little things done well make all the difference between success and failure.”

Tim Kimura has unquestionably changed the course of Trail since his start at the Central Valley Saddle Club. His courses are continually challenging both rider and horse each time they step into the Trail pen. We are proud to have Tim here at the Silver Dollar Circuit to design our Trail courses and challenge our exhibitors in the way only “The Man of Trail” can. He hope that you all “chase perfection and catch excellence along the way,” as Tim would say.