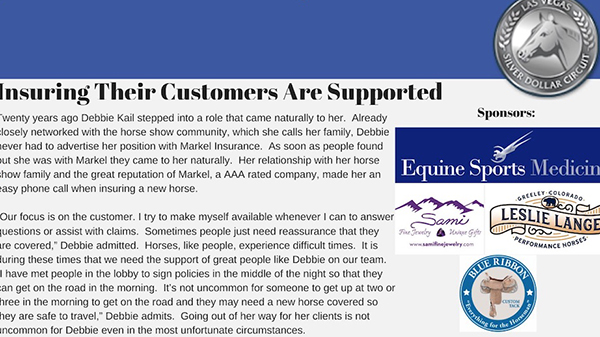 Twenty years ago, Debbie Kail stepped into a role that came naturally to her. Already closely networked with the horse show community, which she calls her family, Debbie never had to advertise her position with Markel Insurance. As soon as people found out she was with Markel, they came to her naturally. Her relationship with her horse show family and the great reputation of Markel, an AAA rated company, made her an easy phone call when insuring a new horse.

“Our focus is on the customer. I try to make myself available whenever I can to answer questions for assist with claims. Sometimes, people just need reassurance that they are covered,” Debbie admits. Horses, like people, experience difficult times. It is during these times that we need the support of great people like Debbie on our team. “I have met people in the hotel lobby to sign policies in the middle of the night so that they can get on the road in the morning. It’s not uncommon for someone to get up at two or three in the morning to get on the road, and they may need a new horse covered so they are safe to travel,” Debbie says. Going out of her way for clients is not uncommon for Debbie even in the most unfortunate circumstances.

When misfortune does hit, as it did recently for trainer, Debbie Cooper, and her two-time World Champion gelding, Wizzle For My Spook, Debbie was there for support. Cleveland, as he was endearingly referred to, was a three time preliminary winner at the World Show, winner for Amateur Ranch Riding, and Junior Ranch Riding. He even set the arena record at the World Show. A couple of months ago, he took a quick turn for the worst with a bad case of laminitis. They reached out to Debbie to tell her about the problem. They had a direct line of communication with Debbie through the entire process. “We thought he was doing to come out of it. He looked like he was getting better, and they were doing everything they could to get him healthy,” Debbie says. She was there with them through the ups and downs and for the sad news that resulted. “No one really wants to deal with death, so I do my best to be there and make it as easy as possible for them.” It’s unfortunate when you lose a horse and even more devastating when you lose one of those “once in a lifetime” horses.

As a tribute to Wizzle For My Spook, the Markel group used his image in their ads after his passing. “He was our poster boy,” Debbie says. It was just one more sign that Markel Insurance and their agents really care about their customers.

Debbie considers herself to be part of your team. We all know it takes a village to be able to run a training business, or to ride and show as a customer or exhibitor. It helps when you have someone like Debbie on your team to support you through the ups and down and to make sure that you’re supported. No one wants to think of the worst case scenario, but when it does happen, make sure that you have someone like Debbie on your team.