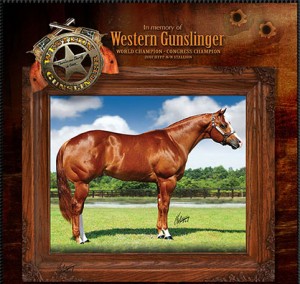 After being retired from the show pen, as an AQHA World Champion and unanimous Congress Champion, Gunslinger began to pass on his eye-catching looks and conformational correctness to the next generation. The fact that Gunslinger’s legacy will live on through his offspring is what gives owners, Donnie and Lisa King, comfort during this extremely difficult time.

“It’s been a rough couple of days,” Lisa King says. “He foundered during the World Show, and we could never find out why. A necropsy revealed a six-inch long tumor in his small intestine that was inoperable. The vets said the toxins from that are what could’ve started the founder.”

“I want to thank everybody who has called and texted. I have over 400 phone calls, posts, and texts. He was not only my horse; I’m learning he was loved by other people as well. It’s just very heartwarming to know that so many people loved him and cared about him. It wasn’t just a one-sided love (you can be a little prejudice when it comes to your own kids).”

We remember chatting with stallion manager, Doug Tallent, back in 2010, which marked the debut of Gunslinger’s first foal crop entering the show pen. In fact, the stallion’s first foal won Select Weanling Stallions at the 2010 AQHA World Show.

“Last year, [2009] was the first time he bred any mares, and this year [2010] is the first time he has bred any Paint mares,” Tallent said. “His very first foal has already been a Select World Champion. Only one other stallion, that I know of, has ever done that before. That was his father, Golden Gunslinger, and this horse did it. This horse is the real deal. He is one of the only N/N horses that looks N/H. He is going to be incredible.”

Tallent’s prediction proved to be more than accurate. Western Gunslinger was incredible. He was a promising young sire that accomplished many historic feats during his seven short years of life.

“Last year, [Gunslinger offspring] won three Breeders Halter Futurity classes, the Nationals, and went on to win the World and Congress,” King says. “This past year, his son was Grand Champion Stallion, and he had two offspring win, one in the yearling [class] [Smith N Wesson] and one in the two-year-old [class] [Secret Gunfighter]. He has 103 foals and 46 are performers. This year, he bred almost as many mares as he has every bred. We bred a total of 80 mares, so there ought to be a lot more coming to finish him up, even if he isn’t here himself.” 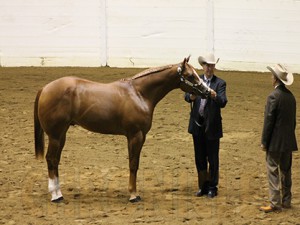 Gunslinger, who was bred by Wayne and Vickie Dealing of Alabama, has resided in North Carolina with Doug Tallent for the past six years.

“He has been in great hands, and Doug loved him dearly,” King says. “It’s just a great loss for all of us and the industry, I think. He’s got some great ones out there, but nothing will replace him. He was my heart and soul.”

King has indicated that Gunslinger has been cremated and will return home to Florida to claim his final resting place. Today, Monday, February 10th, happens to be Lisa and Donnie King’s 35th wedding anniversary, so they hope to take some time for themselves, to rest, regroup, and be back to support Gunslinger’s foals in 2014.

We would like to send our deepest condolences to both Donnie and Lisa King as well as Doug and Gena Tallent following this sad news.

Lisa and Donnie King- A Lifetime Love of Quarter Horses

There’s a Shootout in the Congress Halter Horse Pen!