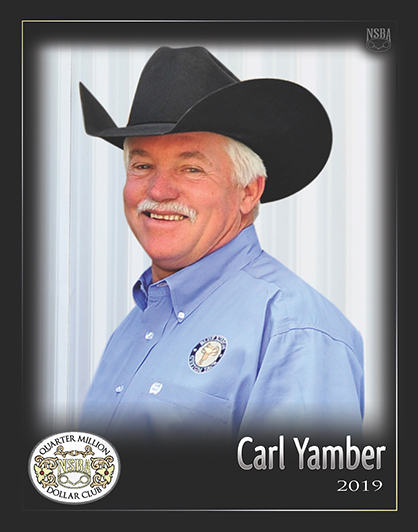 Carl began his involvement with horses by going to a sale barn near his home in Northern Virginia. Before long, he began riding horses through the sale ring and at 13, he bought his first mare with his own money, and showed her locally. He once turned down an offer by NSBA founding member Walter Hughes to show his mare, preferring to enjoy showing his own horse.

Carl would later work for Walter during his teenage years, learning about numerous disciplines from Cutting, to Reining to Western Pleasure. Carl then spent four years with trainer Bill Morris before starting his own training business. It was during his time with Bill that Carl met Wayne Davis, and a life-long friendship and horse sales partnership was formed.

Carl’s eye for conformation and movement made him a go-to person for finding prospects that he showed as well as bought and sold. A look at Carl’s NSBA earnings bring up such horses as Miss Holly Bar Dee, Investors Maiden, Shes Raisin Cain, Zippo Glo Lady, Zip In Straw, Im Up To No Good, Miss Chipolena, Vantage Playmate, Scotches Old Gold, Zippos Cowgirl, Zippo Romeo, Miss Iron Version, Mr After Shock, Invest In A Hot Star, Ima Good Rodder, The Good Ranger, Sleepin In The Rain, My Only Luv, Machine Made, Willy Has Potential, Krymsuns In Troube, She Looks Expensive, A Good Touch, OHK Goodbars Krymsun and Made Just Right.

Just a few of the horses that Carl has owned are Top Vantage, Approval, Machine Made and Good I Will Be.

Carl met his wife Trisha at a horse show, and the two were together for 33 years. They married in 2000. Together they formed CT Quarter Horses, a powerhouse partnership that has produced many world champion and Honor Roll Hunter Under Saddle and Western Pleasure horses.

It seems like Carl Yamber had always been involved in NSBA events, and he was – since the beginning of the association. He credited Walter Hughes and Leo Barbera with introducing him to NSBA. Carl had the distinction of winning the very first NSBA Two Year Old Snaffle Bit Western Pleasure class at the All American Quarter Horse Congress in 1983 on a gelding named Scooby Doc, who was by Hobby Doc.