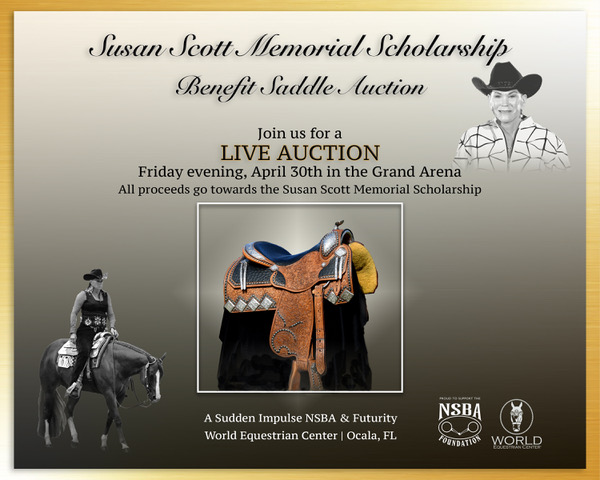 The National Snaffle Bit Association (NSBA) in support of the NSBA Foundation has announced the conception of the Susan Scott Memorial Scholarship Fund.

This fund will benefit the recipient Youth of the Year Award, which is presented annually by the NSBA Foundation to a youth who has gone above and beyond to exhibit exemplary character in helping others through community service. The formation of this scholarship will enrich the future of the equine industry by providing educational opportunities to the next generation and rewarding community service, academics and achievement.

The start-up costs for the Susan Scott Memorial Scholarship Fund will be offset by the auction of Scott’s custom Harris Saddle, which was donated by her daughter, Nancy Ditty. The effort is coordinated with Nancy’s involvement, the NSBA Foundation and the 2021 Youth Board of Directors. Ditty’s generous donation will help the newly created scholarship on the pathway towards commemorating Susan Scott’s contributions to the industry and carrying her legacy forward to future generations. This donation was an important milestone toward the goal of establishing the Susan Scott Memorial Scholarship Fund, and the NSBA Foundation has high hopes of additional pledges from new and existing members supporting the program for years to come.

The live auction will be held April 30, 2021 in the Grand Arena at the A Sudden Impulse NSBA & Futurity at the World Equestrian Center in Ocala, FL. For more information on the NSBA Foundation or to donate directly to the Susan Scott Memorial Scholarship Fund, contact the NSBA Foundation by email foundation@nsba.com or www.nsba.com. Follow NSBA on Facebook, Instagram and YouTube to stay up to date with NSBA news.

Susan, who grew up in Miami, began showing horses at a young age, competing in open and breed shows around the state. Susan started Haylo Farm in Ocala and began a horse breeding operation with five horses, later growing to as many as 150 head, as well as a cattle operation.

Scott was a decorated American Quarter Horse Association (AQHA) and NSBA owner and exhibitor. Involved with NSBA’s programs from their infancy, Scott competed in Breeders Championship Futurity and NSBA World Championship Show classes as well as NSBA futurity classes from the very first year they were offered. Always competitively mounted, and often on a horse bred from her own Haylo Farm, Susan won numerous NSBA and AQHA titles. Susan was named to NSBA’s famed Quarter Million Dollar Club in 2010, and was the first Non-Pro exhibitor to reach the milestone.

Established in 1983, National Snaffle Bit Association has expanded from its roots of the pleasure horse to recognize various disciplines and eight breed associations in competition. NSBA’s mission is to grow the show horse community through various equine programs and events where every activity benefits horses, breeders, owners and exhibitors alike.