November 19, 2022 | Filed under: Around The Ring Galleries,Featured,Show Results & Gallery | Posted by: Delores Kuhlwein 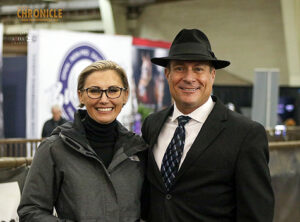 On Friday, November 18th at the 2022 AQHA World Championship Show, Charlie Cole won his 20th World Championship with Al My Assets in Junior Pleasure Driving.  Al My Assets is owned by Michelle and Sheila Bauer of Holland, Michigan, and he’s already had an impressive career as a Hunt Seat Horse, with Driving now becoming a notable part of his show career.

Right after that big win in Junior Driving, we also talked to Michelle Bauer, who had won Amateur Pleasure Driving with Al My Assets, “Ivan,” earlier in the show on November 9th.  She explains 2022 is Ivan’s last year in the Junior division as a 5-year-old and she talked about his driving career with Highpoint.

“He has always done the Hunt Seat and they taught him driving after the 2021 NSBA World Show,” she explains.  “I don’t know that they planned he would be ready for the Congress last year, but he took to it right away, and they ended up showing him at the Congress in 2021, and he won the Junior Driving.”  She says Jason Martin also showed him at the World Show last year and won.

It was then they told her Ivan was really fun to show and asked if she’d like to do the driving as well.

“So I went down to Texas over the winter and had a short lesson from Charlie, and then we went to show at Sun Circuit and that’s where we got qualified,” Michelle explains.  “It went really well for my first time, and we didn’t show again until NSBA.”

Michelle reveals she’s learned a little more each time she has driven Ivan, and she appreciates Charlie’s 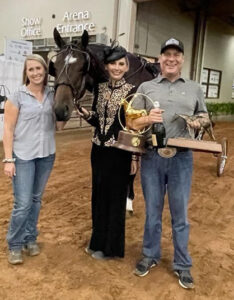 teaching, as he instructs a little bit at a time so it’s not overwhelming.  The steering as one example, she explains, is a little different because when you pull, you have to give it a second for the response.

“I’ve worked with Beth Case with Ivan on the Hunt Seat, but up until this time, I really hadn’t worked with Jason and Charlie, so it’s been really fun having them teach me.  I didn’t really think at 43, I’d add another class!  But he’s a quiet horse, and he’s comfortable in the cart, so I’m definitely enjoying it more than I thought I would.”

Michelle says that Highpoint is talking about teaching Harold, Give Me A Good Alibi, driving over the winter because Ivan will be a Senior horse next year.  She adds that she’s extremely pleased with the show’s results. “I was really happy because Charlie has worked so hard, and they’ve all worked so hard with him – Beth, and Ashley Bailey has done so much to get him ready.  I want my horses to be good for them, so I’m happy for them, too.  But driving has been really fun, and I think it’s something I’ll continue doing if I have a horse for it!”

AL MY ASSETS/BAUER; MICHELLE AND SHEILA

THAT IS THAT/SCHULTZ; MICHAEL J

YOU HAD ME AT ALLO/CAPITOLA; KEISHA L

HOWS THAT FOR YA/MILLER; MORGAN