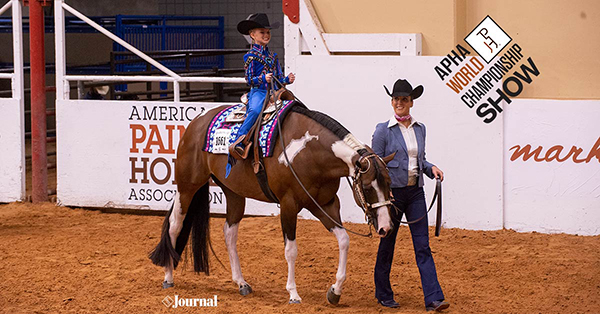 Raised around horses, 7-year-old Maggie Pattison is no stranger to horse shows or riding. But before she saddled up for the 2020 APHA World Championship Show’s Youth Lead Line class, the young horsewoman had to take on another obstacle—overcoming a year-long, sudden-onset fear of riding that kept her out of the saddle until late July.

“It was kind of strange,” Maggie’s mother, Tiffany, said. “She has been doing Leadline and horse showing her whole life, but last summer she was just overtaken by fear. She still wanted to ride, and we’d go to the barn and get the horse all tacked up, but when it came time to get on the horse, she would start shaking from head to toe.”

An equestrienne herself, Tiffany knew it was time to let Maggie take a step back. Hopefully, she’d come around on her own when the time was right.

That time, it turned out, was in late July at the World Wide Paint Horse Congress in Tulsa, Oklahoma. While chatting with two young ladies from the Pattisons’ barn family, Maggie expressed an interest in showing “Snickers”—Tiffany’s show horse, a tobiano mare named Hotnblazing Only. Tiffany was game, and told Maggie she could show if she practiced with Snickers for the next two days—doubling down, the 7-year-old cowgirled up. As quick as her fear had come on, it seemed to dissipate. Maggie, the rider, was back.

In the weeks leading up to the APHA World Show, Maggie practiced diligently, without a trace of the fear that had paralyzed her for more than a year.

“She’s been all about it and is really excited when it is time to ride,” Tiffany said. “When we’ve gone to take lessons, she’s been riding by herself. I kind of planted the seed that this is the last year for Leadline, so if she wants to continue showing, it’s time to start thinking about doing something by herself.”

A 20-hour drive from Norwich, Ohio, brought the Pattisons to Fort Worth, Texas. Even after the long car ride, Maggie was chomping at the bit to take a spin aboard Snickers with trainer Erin Fick. She even cleaned her saddle and helped bathe the mare in preparation for her World Show debut.

“We’re competitors,” Tiffany said, “but the ultimate goal is for Maggie to just do the best she can and have fun doing it. We just always tell her to smile and have fun.”

On September 19, the young horsewoman steered Snickers into the John Justin Arena, the picture of confidence in the saddle with a wide grin across her face. And when the final placings were tallied, Maggie left with a brand new trophy buckle in hand and a red-and-gold reserve championship sash around Snickers’ neck, proof of obstacles conquered and dreams realized.