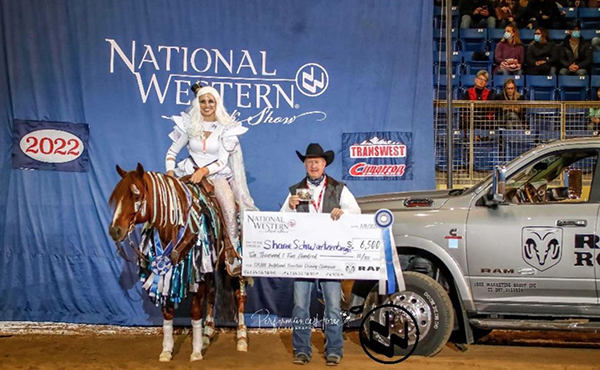 Sharee Schwartzenberger of Longmont, Colorado won the $25,000 RAM Invitational Freestyle Reining championship at the 2022 National Western Stock Show aboard Walla Whiz Affair.  Schwartzenberger wondered how to top her 2020 win with her rendition of Elton John. Her research pointed her towards the next most downloaded and over-the-top artist, Lady Gaga! The judges awarded her a total score of 231.5 for her to take home her share of the $25,000 prize.

The second prize went to Devin Warren of Franktown, CO, a previous NWSS champion who was unable to compete in the 2020 competition due to a horse accident. Warren’s message during his routine was simple, “I won’t give up.” 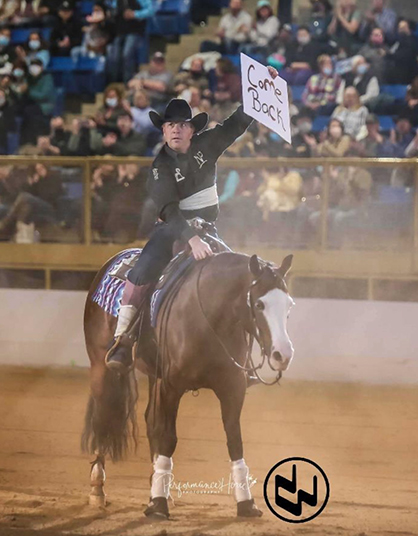 Coming in third in the field of 14 was Shane Brown of Elbert, CO with his tribute to Texas ranching in 1880 and highlighted the new Yellowstone prequel, “1883.”

The coveted People’s Choice award went to Elliot Holtzman of Gainesville, TX with his Aladdin medley featuring his liberty horse dressed as a genie.

Prior to the high paying competition, three talented youth riders were featured in the Youth Freestyle Showcase. Paige Pointer started out with a tribute to her uncle who loved music with a performance to Jump by Van Halen. Lily Thomas had an entire cheering section from her 4-H club, Easy Riders. Lilly Steward paid tribute to our military and their families. First by wearing purple and yellow, purple symbolizing military families’ sacrifice and yellow for the safe return home. At the end of her program, her mother, retired Air Force, stepped out of the RAM truck reenacting a military family reunion. The emotions were real, eliciting tears throughout the arena. Lily Stewart also has an educational exhibit in the Pony Trails area of the National Western, as she is a finalist of the Youth Equestrian Showcase scholarship program. 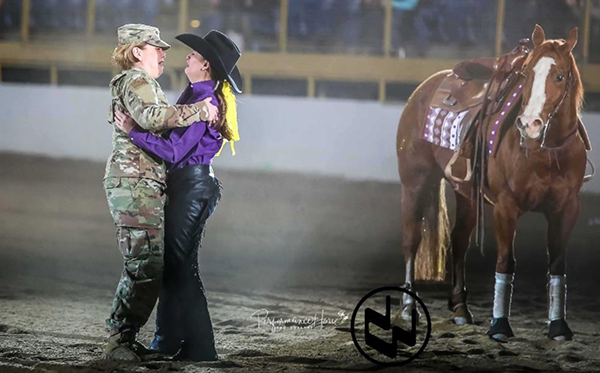 Each year the freestyle competitors try to top what was done before and they continue to bring creativity and impress the sold-out audience. This year’s event was sanctioned by the National Reining Horse Association and was judged by Donnie Bricker, Doug Milholland and Ollie Griffith.