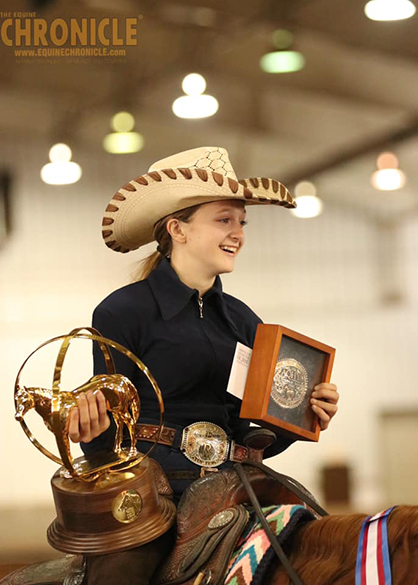 Today’s classes at the AQHA Youth World Show might have seemed incredibly different on the surface. One has brightly colored poles and sparkly outfits, while the other embraces wild rags and cattle. However, when you take a deeper look, they’re not all that dissimilar. Both Trail and Ranch Riding require skillful maneuvering, superior handling, and an ability to remember and execute a difficult pattern. This evening’s two champions- Madison and Klair- did just that.

First, Madison Hayden Rafacz rode Whizenboonsmal to win 13 and Under Ranch Riding.”Peter the Great” is an 8-year-old gelding by a stallion that’s by Peptoboonsmal and out of a Topsail Whiz mare. Madison’s parents are horse trainers so she’d has access to horses her whole life.

“His personality is bigger than the world,” she says. “He has so much heart, and he will do anything you want him to do. He’s the goofiest thing and will eat whatever you want.”

Madison says she strictly shows Peter in Reining; however, every once in awhile, when the Youth World rolls around, she likes to dabble. She has been competing in Ranch Riding for one year now and also showed in Equitation here at the show and was seventh. 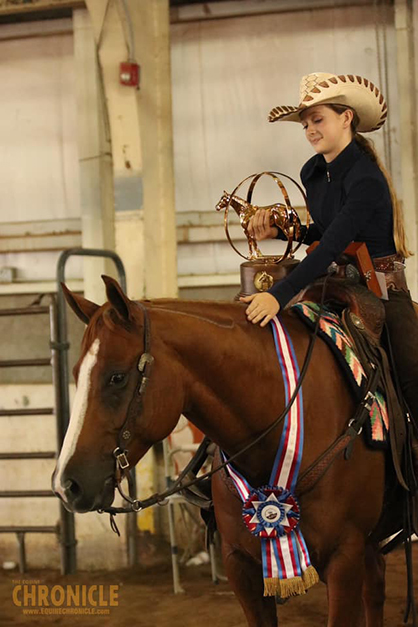 “I think Ranch Riding is super fun, and I have a super cool horse that’s really good at it. I do so much Reining with him, so it’s fun to get his mind on something different.”

Madison’s goal for today’s class was to remember her pattern since a momentary memory lapse at the Congress last year cost her a prize. “I think I definitely plussed my extended lope. He was really good, except that when we went in, he started staring at the cows and never really wanted to stop.”

Madison will turn 13 in two days, so this golden trophy was an incredible, early birthday present. 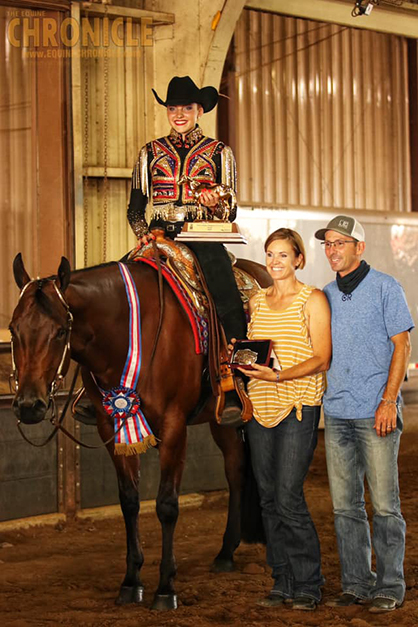 In 14-18 Level 2 Trail, Klair Merrell rode Chillin Ona Dirt Road to a win with a monster score of 241. Not only was she the winner of the Level 2, but she also tied to have the high score in the 14-18 Level 3 class as well heading into the finals.

Klair and her 9-year-old gelding, “Jason,” have been a team for five years. She’s 18, so this is her last Youth World before she heads off to Indiana Wesleyan University on a basketball scholarship.

“He’s the best horse and such a hard worker. He always tries in the pen.

Klair and Jason specialize in Trail and were the Reserve Champions in Level 2 last year. They’ve also made the Level 3 finals for three years now. Because there were so many competitors in the class today, it was quite the marathon effort.

“I had to get up really early, because I was pretty early in the Level 2 and Level 3. I went 29th in the draw, and I had a long break after that. It was definitely a long day but totally worth it.”

“I wanted to have a good pattern overall, but I also really worked on the slow parts to make them as fancy as I could. I think we will have plussed our lope and trot poles and the box and side pass.”

Coming up next, this team will compete in the Level 3 Trail finals and the Level 2 Horsemanship finals.

Reserve was Meagan Braun with Showin My Ace. Third was Madison Musser with Good At Da Bar. Fourth was Lauren Raad with Scooter Brown. Fifth was Hannah Olaussen with Wearin Only Moonlite. 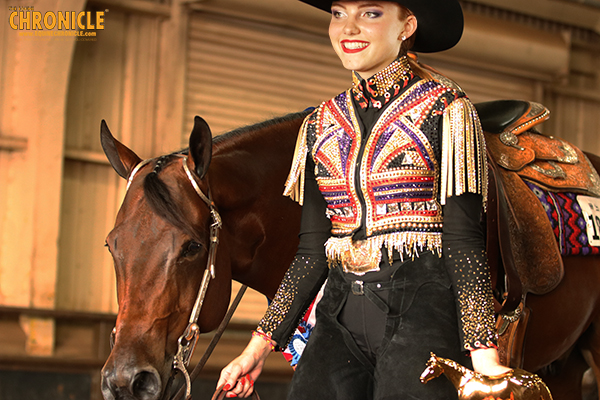 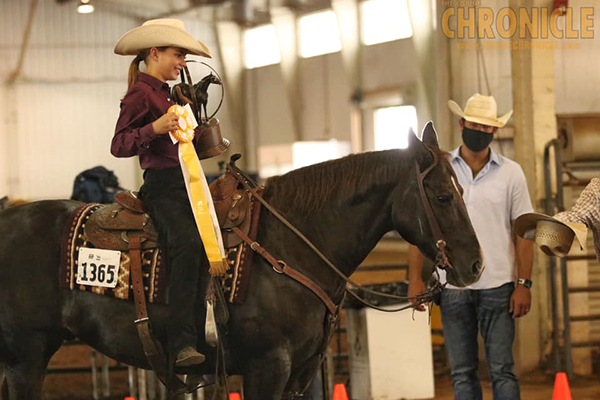 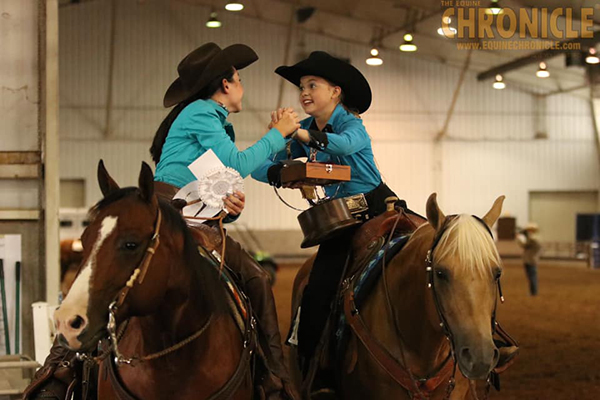