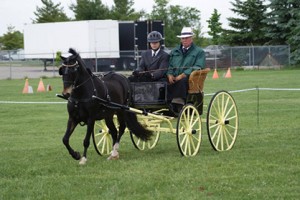 Ottawa, ON, January 31, 2014 – Equine Canada would like to extend condolences to the family and friends of Gerald T. McCallum of Loretto, ON. McCallum passed away peacefully at his home on January 11, 2014 at the age of 77.

McCallum was a pillar in the driving community and enjoyed a long and successful career in the equestrian world. McCallum’s accomplishments over the years include competitor, organizer, official, volunteer, horseman, coach, judge and rider.

In 1977, McCallum became a part of the Central Ontario Pleasure Driving Association. His accolades included president, competitor, clinician and general all over supporter. McCallum was known to always offer his help, guidance and time.

His incredibly successful career included many accolades and championship titles. McCallum was the first recipient of the Freedom Sportsmanship Award at the Canadian Carriage Driving Classic (CCDC) voted on by competitors. He was also the 1987 Amateur Champion, 1998 Runabout Champion, 1987, 1993 and 2001 Pair Champion at CCDC and Walnut Hill, and North American Champion Four-In-Hand.

McCallum went on to become one of the finest carriage drivers, trainers, and greatest supporter of the North American driving community. With his insistence on correct behavior from the horses/ponies under his tutelage, the very best possible turn-out in every detail, proper driver position and dress on the box seat, many champions came onto the driving scene.

McCallum was a true ambassador in the preservation of the traditions of carriage driving; he passed on his knowledge, skills and fine points of driving turnouts and horsemanship, to all.

Many drivers, benefited from McCallum’s knowledge and the depth of his experience and he helped grow the sport in Ontario. He knew his horses, he knew his turnout and he knew the rules of the sport.

Donations in McCallum’s memory can be made to the Canadian Diabetes Association or the Canadian Cancer Society.