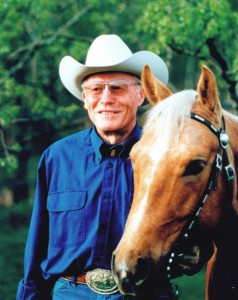 Equine Canada would like to extend condolences to the family and friends of veteran Canadian horseman, Bill Collins of Sherwood Park, AB. Collins passed away on Dec. 31, 2013 at the age of 89.

During his long and triumphant history in the equestrian world, Collins wore many hats, including rider, trainer, coach, breeder, judge, and advocate.

Collins was known across North America-and around the world-for his talent with cutting horses and was the first Canadian inducted into the American Quarter Horse Hall of Fame in 2007. He was also instrumental in introducing the sport of cutting to Great Britain.

His incredibly successful competitive career included many accolades and championship titles in calf roping, cutting, and numerous other disciplines. He even spent time participating in show jumping in order to better coach his English-riding students, and was the Safeway Jumpers Sweepstakes winner at the 1966 Edmonton Rodeo, after clearing fences set over five feet high in the jump-off.

Collins was involved in Leecoll Stables (which opened in Edmonton in 1958 and was re-established in Calgary in 1974) for over 45 years, helping to train hundreds of students, horses, and even a prince.

In 1962, Collins met H.R.H Prince Phillip during the prince’s visit to Douglas Lake Ranch in British Columbia, and introduced him to the sport of cutting. Prince Phillip ended up trying the sport for himself, and spent the next three days learning the basics from Collins. Upon returning to England, Prince Phillip helped organize for Collins to be part of a three-month Royal Cutting Tour demonstration in Great Britain, which took place in 1964 and drew huge crowds of spectators.

Collins was also an invaluable industry advocate, acting as a Director of Equine Canada (then known as the Canadian Equestrian Federation) in the 1960s, and President of the Canadian Cutting Horse Association (CCHA) from 1979 to 1981. He was also a highly sought-after judge for the CCHA, as well as the American Quarter Horse Association (AQHA). His judging career took him not only across North America, but also to Australia, England, Germany, and Switzerland.

To offer condolences to the Collins’ family, or share tributes, memories, and photos, visit http://bit.ly/1mAFfGw.