In Loving Memory of RL Talk About Sudden 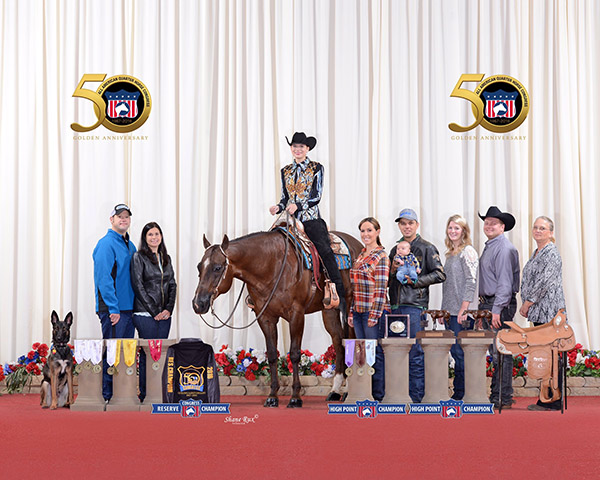 Sometimes, special horses come into our lives and change them in ways we could have never before imagined. That was certainly the case for Taylor Burgess and her family with the 2003 AQHA/APHA gelding named RL Talk About Sudden. “Bugsy,” an all-around specialist by A Sudden Impulse and out of RL Hotroddin Sweetie, was well known on the circuit for both his quirky personality and excellence in Western all-around events, specifically Western Riding. Throughout the course of his career, Bugsy learned from many trainers, including Shannon McCulloch, Becky George, Scott Suggs, James Saubolle, and Carly Parks.

Taylor explains how Bugsy became part of her family, five and a half years ago. “Scott Suggs called my parents saying he found a horse that I had to have and that we should get on a plane to Texas,” she says. “Long story short, I fell off Bugsy my first time riding him and got up laughing and saying that I wanted him. Ever since that day, the rest has been history.”

“Bugsy was a character and a bit quirky at times. Bugsy would see his people and put out his nose for a kiss on that perfect white spot. His favorite snacks were Skittles, donuts, Sweet Shop treats, and sugar free mints. Every time we came out of the show pen, he would be waiting for a treat knowing he did good!” 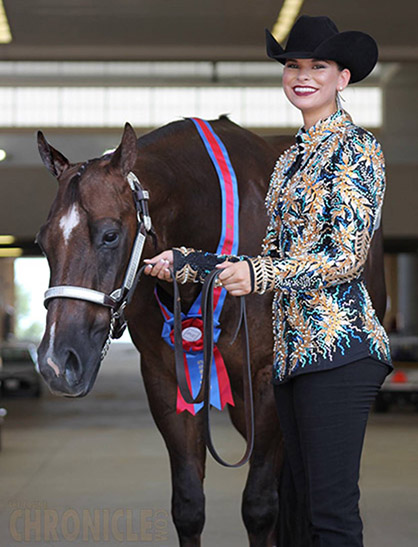 Taylor believes Bugsy’s favorite classes were Showmanship and Western Riding, because he would always give her his very best in those disciplines. “Bugsy was great, because he was extremely versatile and could do many events. His heart was so big, and he would try anything for me. He always would stay right up with me, making my job easy for Showmanship. Sometimes, he would even be ahead of me looking at me like he was saying, ‘Come on girl, pick it up!’ Every maneuver he did was crisp and elegant, which was why I loved doing Showmanship with him.”

“Before Bugsy, I had never done Western Riding, so he taught me everything I know. His lead changes were flawless, to say the least. That was definitely the most fun class for us to compete in together. You’d rarely see me without a smile as I was going down the line with him. What I would give to do that one more time…”

The close partnership that Taylor had with Bugsy was certainly evident when looking at the many titles they accumulated over the years. In 2015, the team was the Reserve Champions in 14-18 Horsemanship and Western Riding at the Pinto World Show. They also won the All-Around Youth 14-18 title at the AQHA Novice Championship in Las Vegas and were the champions in Showmanship and Halter, Reserve in Horsemanship, and third in Western Riding. In 2016, they were the #1 14-18 APHA youth team, All American Quarter Horse Congress High Point Novice Youth 14-18 team, and High Point Novice Youth. At the AQHA Novice Championship in North Carolina, they were the champions in Western Riding and Reserve Champions in Equitation. “It was a crazy fun year that I will treasure forever!” she says.

2017 marked the last show season for Bugsy before he sustained a career ending injury. They won 14-18 Showmanship at the APHA Youth World, were Reserve in 14-18 Western Riding, and third in Horsemanship and Trail, which put them as the Reserve High Point team for the show. Then, just three weeks before they were set to head to the AQHA Youth World Show, disaster struck. 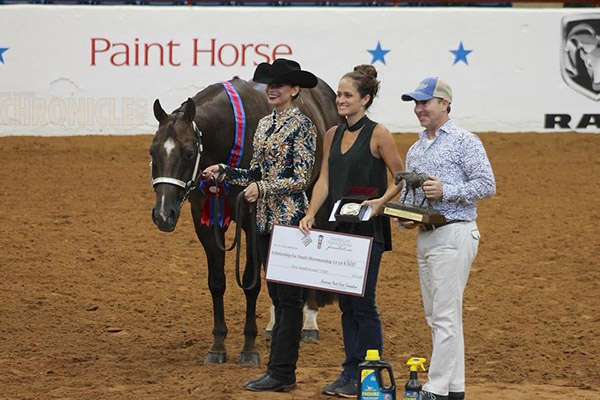 “Bugsy had a devastating injury at the farm, which should have been life-ending, but he somehow survived,” Taylor says. “Bugsy spent three weeks inpatient at Rood and Riddle in Kentucky and then six weeks in rehab at Scott Morrison’s in Kentucky. He then came to New York to retire as his days as a show horse were over. We promised him the best retirement possible until he said he couldn’t go on. The next three years were full of many ups and downs, but he always rallied, even on the bad days.”

“On August 18th, Bugsy told us that he was done. His mind was still there, but his front feet just couldn’t hold up anymore. It was a heartbreaking decision to make, but it was the best for him. It was time that we gave to him what he’s given to my family for the past five and a half years- unconditional love.”

Bugsy is being cremated and a headstone and bench will be placed under a beautiful, oak tree at Taylor’s house in New York. “That’s where I planned on having him live out his retirement, so it only seems right,” she says.”

Certainly Bugsy was an exceptional show horse and trusted partner, but for Taylor, he was so much more than that. “Bugsy taught me how to be patient. You could never rush anything with him. He told me when he was ready, and I just had to listen and accept that. Mostly, he taught me how to love. The endless rehab these past three years has been an emotional roller coaster, but one thing that never changed is my love for him. Going the extra mile to take care of something you love is nothing, even if it means hours upon hours at the barn with vets, sleeping in a stall, or being up every hour to check on him. That love came with a lot of responsibility, and I’m so thankful he gave me that. There will never be another horse like Bugsy in my life, but he made it so I will know how to have patience and love for the next one.”

Former trainers, Becky George and Carly Parks, also had some fond words to share about Bugsy.

Carly Parks- “My favorite thing about Bugsy was his how he liked to pretend to be a tough guy, but he secretly loved hugs and being spoiled. He would always watch Taylor when she was around the barn, but then would pretend to be indifferent when being loved on. He was such a kind horse who loved children, especially Caden Parks. When Caden was a baby, Bugsy would let him stick his fingers in his eyes, up his nose, and grab onto his ears and Bugsy would just keep his head low so he could do it. Bugsy and Taylor made an incredible team and definitely brought out the best in each other.”

Scott Suggs- “Bugsy came into my life when he was two years old. A long time customer, Fred Busch, called me and said that he needed my help, because he had a two-year-old that he couldn’t get ridden. He wasn’t joking. I spent the next six months just trying not to get bucked off. He was afraid of everything; but, at the same time, he was so incredibly gifted. He was supposed to go to the first Masters Futurity at the Congress, but I knew there was no way he could handle the Congress and me live through it. My good friend, Shannon McCulloch, had seen him and said she wanted him and would leave him with me until he was ready to start his all-around career. I got to show him in December and was third and then won in Arizona and was a circuit champion at the Denver Stock Show in Junior Western Pleasure in January. He was quirky, but as faithful a show horse as I’ve ever seen. One person who made a huge difference for Bugsy was Brent Husky. He spent an enormous amount of time desensitizing Bugsy and made him accept things that would scare him. He was a truly great horse who made everyone who was ever involved with him better.”