In Loving Memory of Nearly Chocolate 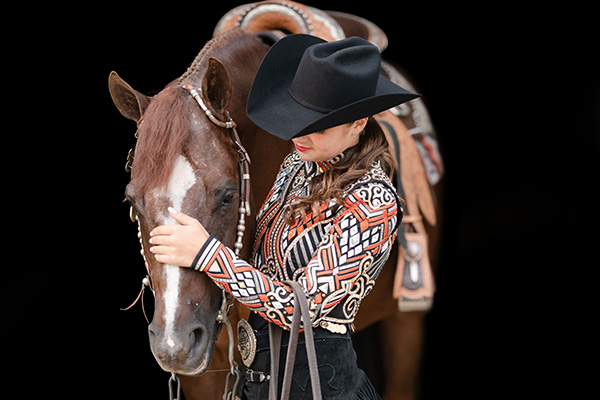 Sadly, the D’Onofrio family had to say farewell to a beloved family member recently. Nearly Chocolate was the 2008 chestnut gelding by Huntin For Chocolate that Jennifer and daughter, Bella, purchased in December of 2015 from fellow AQHA exhibitor, Sunni Chernega.

At the time, Bella was just ten years old and already had a wonderful partner in Just Good Enough, competing in Showmanship and Trail together. But Bella was interested in pursuing English events and that’s when trainer, Missy Thyfault, came across “Curly,” after he won Amateur Equitation at the AQHA World Show with Sunni that year.

“That beautiful, blue, sky day in December truly touched our lives forever,” Jennifer says. “After their second ride, Bella, adorned in turquoise breeches, and with the sun shining above, turned to Curly and he rested his head in her chest, and she wrapped her arms around him. Our search was over. It was love at first hug.”

Jennifer describes Curly as an incredible athlete, but also a horse with a huge heart. “He was athletic, willing, and smart!” she says. “But he also made you honest, made you work for it, and he wasn’t as easy to ride as many people thought. He taught Bella a lot about using her legs, proper pace, and to go for it. He was talented at lead changes, leg yields, and turn arounds, but he required a great pilot. Both Sunni and Bella achieved that and were able to showcase his talents.”

But he wasn’t just an exceptional partner for Bella. He was a member of the family. “He was our family pet,” Jennifer says. “He loved licorice. Bella often shared it with him, ‘Lady and the Tramp’ style. There are not many horses you could trust that way.” 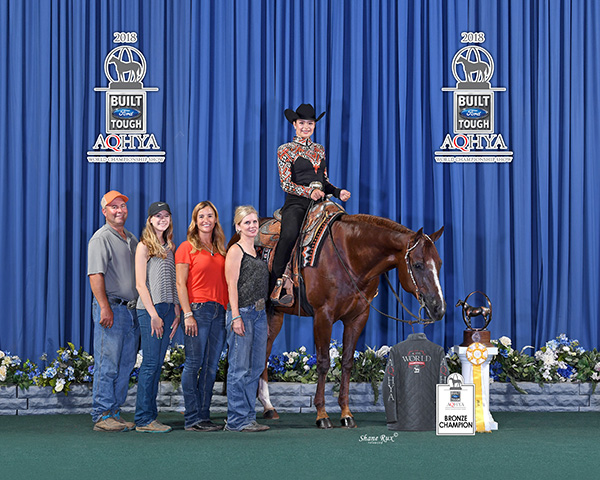 One of the ladies’ most memorable moments with Curly was a 2020 Reserve World Championship in 14-18 Equitation. “Curly and Bella always have performed better when the patterns are more challenging,” Jennifer says. “The harder the pattern, the better, so the finals pattern was made for them. This one contained multiple leg yields and a flying change while in a two point. When she trotted in, I just knew the connection was there. They attacked that pattern. Missy had recently switched them to a snaffle for Equitation, and she was spot on. They were so connected that day.”

Another big moment was receiving their first globe as a team. Bella and Curly took home two bronze trophies in Horsemanship and Showmanship at the 2018 AQHA Youth World Show. Other major accomplishments include a third place and NSBA Championship in 12-14 Showmanship at the Quarter Horse Congress.

“I think Curly’s most amazing quality as a show horse was his ability to compete and win in so many events on a national level. At the time of his passing, he amassed over 1,600 AQHA points. Curly and Bella have acquired five superiors in Showmanship, Equitation, Horsemanship, Trail, and Hunter Under Saddle and they were working toward their sixth in Western Riding with 38.5 points. Not many horses can be competitive at that level. It’s a true sign of his heart and grit!” 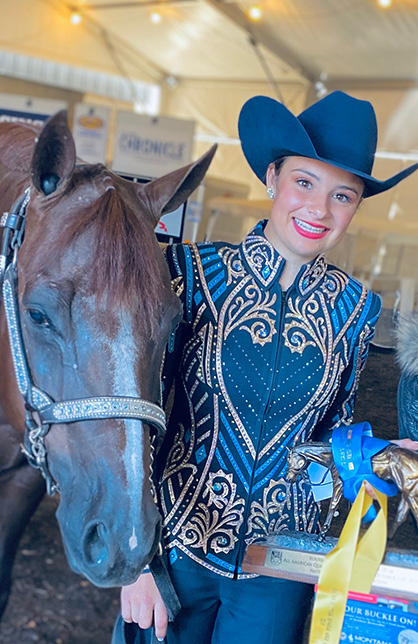 At the time of his death, Curly and Bella were nationally ranked in the top five in in Equitation, Showmanship, Western Riding, and in the top 10 in Horsemanship. They’re also the High Point 14-18 All Around youth team in Ohio for 2020, winning Showmanship, Horsemanship, Equitation, Trail, and Western Riding. Curly is also Horse of the Year in Ohio 2020 with Missy Thyfault. “That’s not easy to do and a true testament to their versatility and hard work. Being an all-around rider and horse is very difficult. It’s long days and lots of practice.”

The worst part about Curly’s passing was its sudden nature. One day, he and Bella were posing for a photo shoot to capture their success and the next, he was suffering from colic. “Despite the quick response of our trainer, and the surgeons at The Ohio State Veterinary Hospital, he was unable to be saved. The hardest part of his passing was the suddenness and shock. There was no time to reflect and prepare. Our family is truly devastated by this loss and struggling to move forward. Nearly Chocolate had a forever home with us. We regret that he and Bella will never get the opportunity to complete their goals, but we are grateful for our time with him and so blessed to have been loved by him.”

Our sincerest condolences to the D’Onofrio family during this difficult time.