(Columbus, Ohio) – The Interscholastic Equestrian Association (IEA) celebrated the successful return of the 19th Annual Hunt Seat National Finals on April 22-25, 2021 at the April 22-25, 2021 in Perry, Georgia. Complications of the COVID pandemic forced IEA to cancel their 2020 National Finals (then slated for Burbank, California) and re-group for the 2020-2021 IEA Season. Despite pandemic-related challenges faced by everyone, IEA leadership, coaches, riders and parents pulled together and safely hosted more than 900 individual horse shows from August to the present to qualify more than 400 riders from across the nation for the 2021 IEA Hunt Seat National Finals.

In order to safely host a horse show of this magnitude, IEA officials elected to extend the typical three-day show into four competition days so that upper school (grades 9-12) and middle school (grades 4-8) each had two separate days to compete and therefore not everyone was at the venue at the same time. Safety precautions including temperature checks, mask requirements, sanitizing and social distancing were routine, however, they could not dampen the excitement and energy of hundreds of young equestrians, their coaches and family members on finally being back at National Finals. IEA incorporated several new fun theme days, scavenger hunts, contests, interviews, photo opportunities, activities and more to add to the excitement. 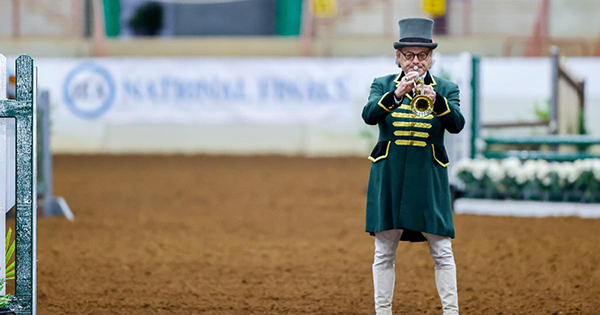 The atmosphere was ripe with anticipation when long-time Ringmaster extraordinaire, Ed Nowak, called the first class to enter the ring on his gold trumpet. Announcer John Bahret kept the show moving smoothly all weekend with his agile voice and witty demeanor. The show was judged by Mary Knowlton (USEF “R”) and Rita Timpanaro(USEF “R”) and the commentary on the USEF Network live stream was provided by Megan Taylor (USEF ‘r’) and various guests. Jack Nash of Pegasus Productions served as the Course Designer and Nancy Kohler-Cunningham and Emily Davidserved as Show Stewards. Bernie Villeneuve deftly ran operations as the Show Manager. Ron Schwane Photography snapped thousands of photos and videography was expertly provided by Shownet, LLC for the USEF Network. More than a dozen additional IEA staff members ran operations in the barn, paddock, gate, show office, vendor area, awards, and social media along with dozens of youth and adult volunteers.

Thursday kicked off the Upper School Team competition with 18 teams from 11 Zones across the nation. This National Finals marked several historical firsts for IEA – one being that with the growth of Zone 6 (Iowa, Minnesota, North Dakota, Nebraska, South Dakota, and Wisconsin) for the first time all Hunt Seat Zones in the US were actively represented this season and at this National Finals. Per usual, competition was fierce amongst both new and veteran teams with riders vying to accumulate points in each class for their team.

IEA utilizes a draw-based competition format whereby riders do not ride their own horses, but rather they are provided both horse and tack for every competition throughout the season, post-season, and Finals. In the over-fences classes, riders are only allowed two practice jumps before entering the show ring. For flat classes, riders meet their horses a few minutes before they show and only then do they just walk from the paddock into the show ring (in this case, about 20 yards). This unique competition format levels the playing field and riders are judged on their equitation and how they handle an unfamiliar horse. 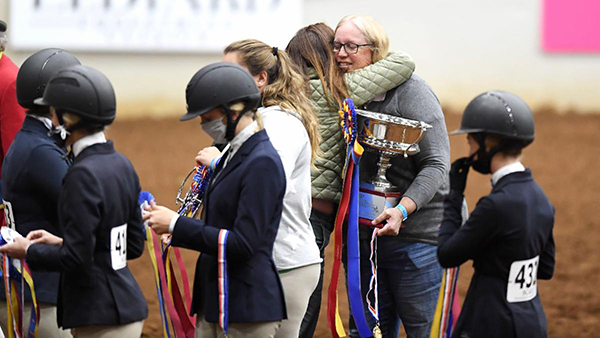 Day two of IEA Finals on Friday saw the Upper School Individual Qualifiers compete – those riders who placed at the very top of their divisions throughout the season. Again, the competition was top-notch as coveted National Champion titles were at stake and riders were competing against the best of the best. This season, IEA had a total of 9,662 Hunt Seat riders in grades 4-12. 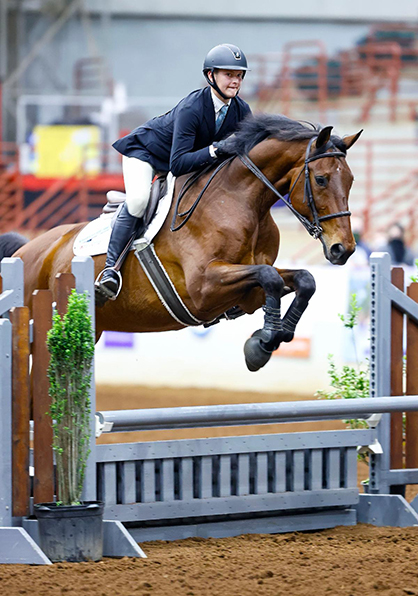 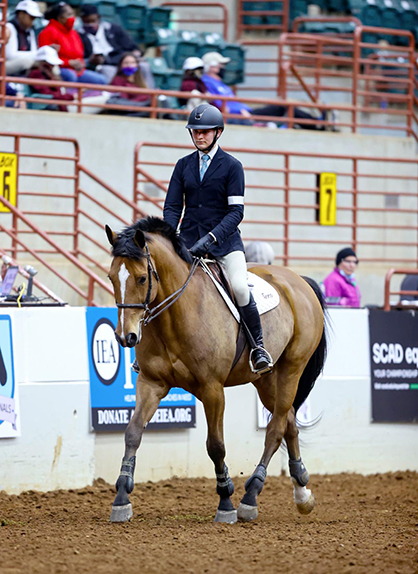 A name that was repeatedly announced in the winner’s circle was that of Senior rider, Riley Babb (TerryAllen Farms). A seven-year member of IEA, Babb is no stranger to IEA Finals – having won numerous Championship titles over the course of his IEA career, including the 2019 Hunt Seat Leading Rider Award as a 10th grader. By the end of day two, Babb had won both the Team and Individual Varsity Open Over Fences Classes, as well as the Team and Individual Varsity Open Flat classes. With four blue ribbons and trophies in his pocket, Babb also earned one of two “wild-card” spots in the Varsity Open Championship Class to be held on Saturday. Sophomore Alida Treuting(Olde Towne – Zone 2) secured the second wild-card spot in the Varsity Open for the next day.

Saturday morning saw the beginning of the Middle School (Futures) over fences classes as part of the Middle School Individual Competition. Strategically placed at noon on Saturday was the IEA’s marquee class – the Varsity Open Championship – where the top Varsity Open level riders from each Zone along with the two wild-card riders – compete head-to-head in a combined over fences and flat class. Rising to the winner’s circle again (where he had sat all week), was Riley Babb to take the title of 2021 IEA Hunt Seat Leading Rider for a second time. Reserve Champion Varsity Open Championship went to Alida Treuting. Presenting the awards for this class was guest presenter and USEF President, Tom O’Mara along with IEA Executive Director, Roxane Durant; IEA Chief Operating Officer, Myron Leff, and USHJA Sport Programs Manager, Danae Fryman.

The remainder of Saturday’s competition saw more historical firsts as IEA welcomed the addition of new walk-trot classes and riders in grades 4th and 5th now competing at the National Finals for the first time. It was a beautiful dichotomy to follow the Varsity Open Championship of experienced riders with the inaugural Individual Walk-Trot class of riders just beginning their IEA journey.

On Sunday, not only was the Middle School Team Competition hot – but the décor and costumes worn by riders, coaches, and family members reflected a tropical Hawaiian theme which added to the rivalry for Team Spirit Awards. Not to be outdone by their Upper School teammates, Middle School riders brought their A-game to their Team portion of National Finals, with outstanding rides and sportsmanship efforts. Earning the Victor-Hugo Vidal Sportsmanship Award this year was shared by Ella Petrou (Creidmount – Zone 9) and Gabby Fredrick (Sharkey Farms – Zone 9). Sportsmanship is a very important part of the IEA and these two riders displayed outstanding examples of volunteerism, enthusiasm, and hard work the entire week. 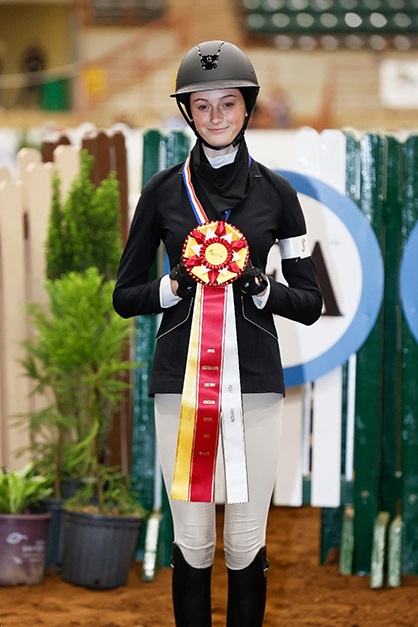 During the week, IEA Executive Director Roxane Durant announced on the live stream that IEA will host a combined National Finals with all three disciplines (Hunt Seat, Western and Dressage) on April 28-May 1, 2022 in Harrisburg, Pennsylvania as part of the IEA’s 20th Anniversary Season. Membership for the 2021-2022 Season will open in May 2021 with competitions beginning August 1, 2021. 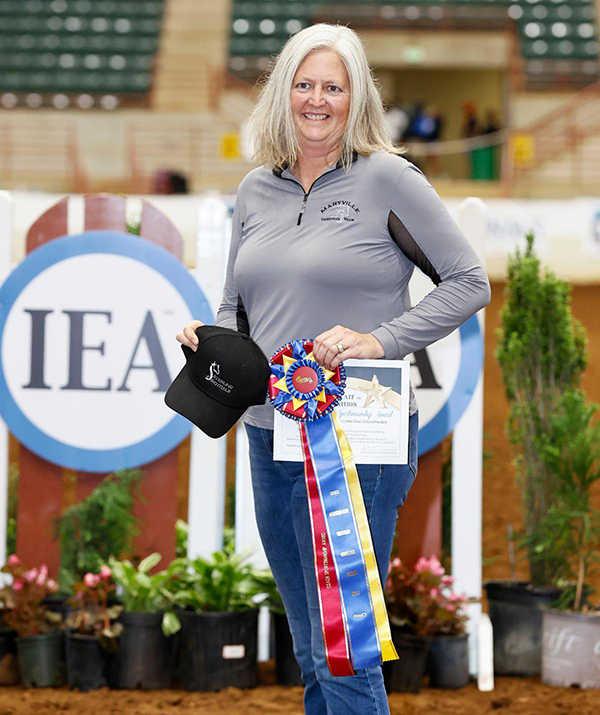 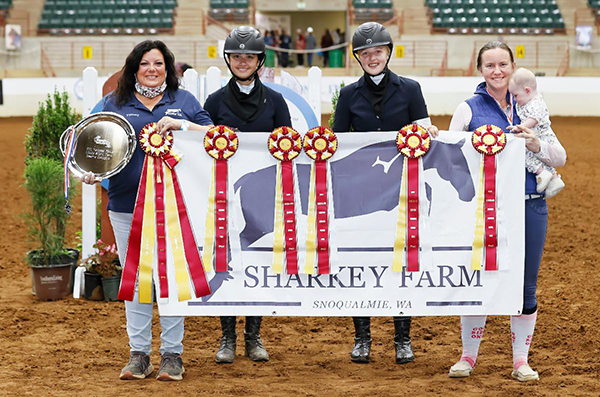 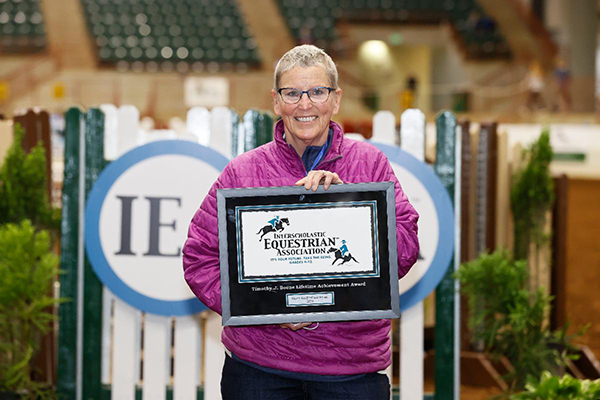 Now finishing its 19th year, the IEA has nearly 14,000 members across the United States riding and coaching Hunt Seat, Western and Dressage disciplines. The non-profit (501(c)3) IEA was organized to promote and improve the quality of equestrian competition and instruction available to middle and secondary school students and is open to public and private schools and barn teams. There is no need for a rider to own a horse because the IEA supplies a mount and tack to each equestrian for competitions. Its purpose is to set minimum standards for competition, provide information concerning the creation and development of school associated equestrian sport programs, to generally promote the common interests of safe riding instruction and competition and education on matters related to equestrian competition at the middle and secondary school levels. 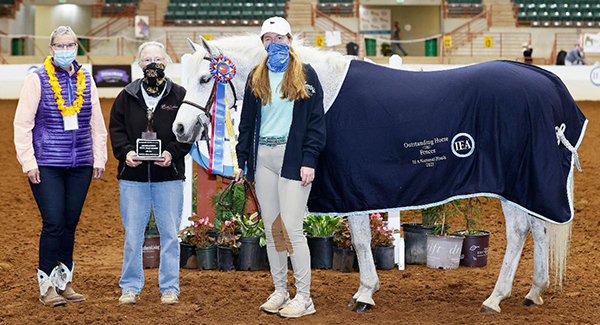 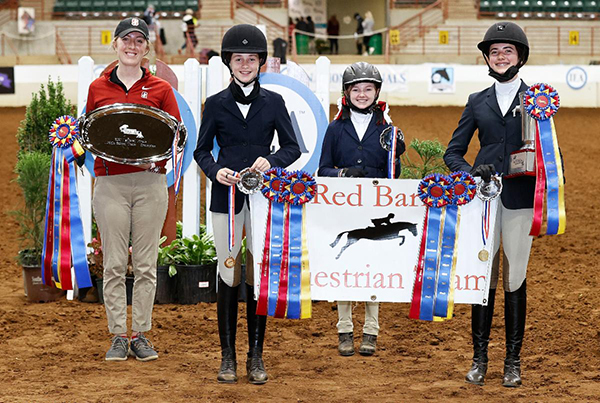 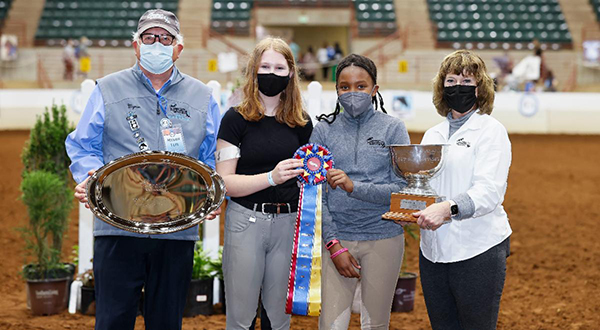 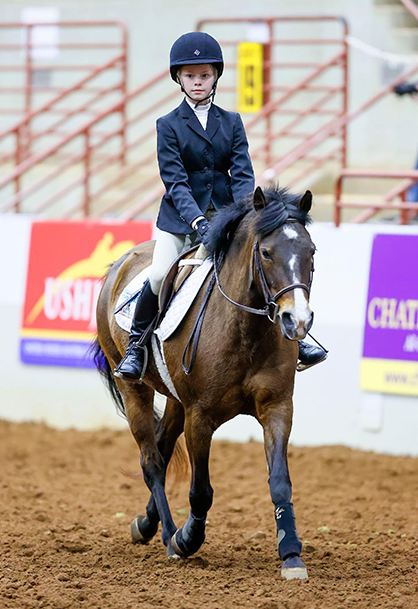